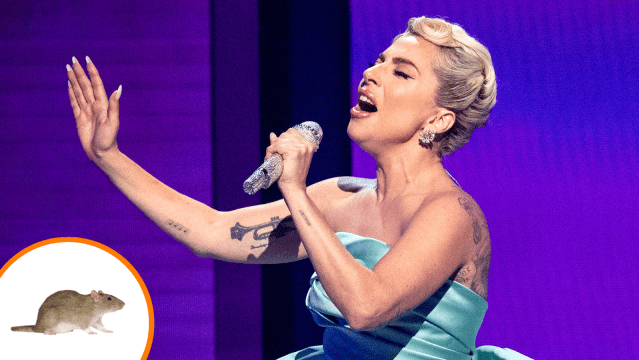 Emma McIntyre/Getty Images for The Recording Academy / Rat
Review of:

If all dogs go to heaven and everybody wants to be a cat, then it’s easy to see why rats don’t always get the attention they deserve. Sure, they’re gross and can be a total nuisance in many a New York City alleyway, but rats also provide valuable insights into the commonalities between animals and humans.

Take the recent Japanese study, for example, that examined how rats responded to the music of Mozart, Queen, and Lady Gaga. According to footage from the study, the rats bobbed their heads to “Born This Way,” keeping in time with the music the same way humans do. Slower songs did not yield the same results, proving that something about the Fame Monster’s beats resonates with the long-tailed rodents.

Now that we know rats are putting their paws together for Gaga, it’s only fair that the musical phenom considers how she can give back to them the way she does the rest of her fandom. If we may ⏤ why not do it in song? And why stop at just one when she can write an entire Broadway musical’s worth?

The time has come for a Gaga-helmed rat musical, and any one of these eight options are sure to deliver the kind of Broadway rat-tacular that only Gaga could provide. As the rodents have already proven, she was born for this.

Not to be confused with RENT or CATS, RATS would dive into the lives of our favorite hairy critters like only a Broadway musical could. With songs like “My Tail is Longer Than Your Tail” and “Who Moved My Cheese?,” audiences would be treated to an up close and personal look at what rats experience on a daily basis, from fisticuffs with other vermin to midnight traipses through the sewers. Gaga could easily take a page out of Marvel’s book and create the Animal Theatrical Universe by incorporating Andrew Lloyd Webber’s cats in the second act ⏤ a dance-off of the ages in the vein of the Jets vs. the Sharks, perhaps? (“Cats v. Rats?”) If you thought Ratatouille’s Remy taught you everything there is to know about our four-legged friends, think again. And while we’re on that topic…

Now that Ratatouille has become a TikTok musical sensation, it only makes sense for Gaga to follow it up with a sequel. With Rata2ille, she could expand upon the lore of the first film while also finally bringing a Pixar movie to the Broadway stage. Forget Nemo and Buzz ⏤ what if Remy and Linguini encountered a Parisian enchantress who pulled a Freaky Friday and forced them to switch bodies? “Linguini” (really Remy) would finally know how to cook while “Remy” (really Linguini) would be totally grossed out by having to run around on all fours and hide under kitchen stoves. The physical comedy opportunities are endless, and let’s be real ⏤ it’s Linguini’s turn for some vengeful hair-pulling.

She already gave us a stellar performance of “La Vie en Rose” in A Star is Born. Why not adapt Edith Piaf’s story so we can finally see it through a rat’s eyes? It doesn’t need to be an animated rat, either ⏤ give us a live-action one belting out a soul-crushing torch ballad about the agonies of locked trash cans any day of the week. The visual quality would have to match the vocals, of course ⏤ we all know why the CATS movie failed, after all ⏤ and while we wait for Andrew Lloyd Webber to finally compose DOGS, La Vie en Rat can deliver the kind of gritty animal drama we so desperately crave.

Inspired by Gaga’s hit song, Hold My Hand Rat would explore the life of a hard-talking woman who takes her pet rat with her everywhere she goes, only handing it off when it’s time to go Erin Brockovich on someone’s ass. A fierce advocate for the rat community, she fights the good fight to ensure that our city streets are not free of rats, but rather littered with them. Rats are part of God’s creation, after all ⏤ why should we swat them away with brooms and scream when we see them scurry through the local Chipotle? Hold My Hand Rat would be all about standing up for the little guy and getting nice and comfortable with the fact that rats aren’t just here ⏤ they’re here to stay.

Look, it’s not easy being a rat. You get no respect, have to dig through other people’s trash to find dinner, and it’s not like anyone’s looking to snuggle with you when the sun goes down. Can you even imagine what famous rats go through? Paparatzi would explore that in full, and since Gaga is no stranger to fame, we can expect hits like “Appaws” and “Bad Ratmance” to really get into the nitty-gritty of what it’s like to be small and terrifying while also being universally beloved. Gaga has plenty of famous rats to choose from, too ⏤ Rizzo, Master Splinter, Templeton, Mr. Ratburn ⏤ so the show’s appeal would be utterly rattical, with audience members of all ages flocking to the theater to witness this multiverse of rat-ness.

Hey, it worked for Air Bud. Why not a rat? While Buddy is busy schooling kids with his slam dunks, the protagonist of Poker Rat would be trying to get out of the massive debt he’s in by entering the highest-stakes poker game of his life. Whether or not the poker rat also has a poker face will be entirely up to Gaga, but the fact that this rodent has mastered the art of holding human-size playing cards in his rat-size paws is worth the price of admission alone. To see whether the rat will get a royal flush or just get Flushed Away, you’ll need to purchase a ticket to Poker Rat, but probably not through Ticketmaster.

Rats are already pretty miserable ⏤ why not give them a chance to sing about it? Everyone loves Les Misérables (and if you don’t, who do you think you are?), so this seems like a pretty easy way for Gaga to get the best of both worlds. Obviously the plot would find a desperate rat stealing a cube of cheese for his family only to spend the rest of his life running from the tabby cat who was hell-bent on eating said freaking cheese. Drama will ensue, rats will sing, and very few characters will make it out alive. Did we mention that the entire production would place in the basement of Madame Tussaud’s, with costumes designed by Gaga and puppetry from Julie Taymor? Yeah, back up, Lion King. The rats are coming.

When you can’t become hot, you might as well become a rat, right? Inspired by the 1997 rom-com starring Freddie Prinze Jr. and Rachel Leigh Cook, She’s All Rat would document one high school student’s transformative journey from unpopular misfit to full-blown rat. Like The Princess and the Frog’s Tiana, this modern-day Animorph will have to figure out how to turn back into a human before she’s stuck as a rat forever. Will she be able to do it in time for Prom? Will she be asked to Prom? The stakes have never been higher, and Gaga’s pop-rock score is sure to get our hearts pumping as we collectively scurry toward the finish line.

The rats have spoken. Your move, Gaga.