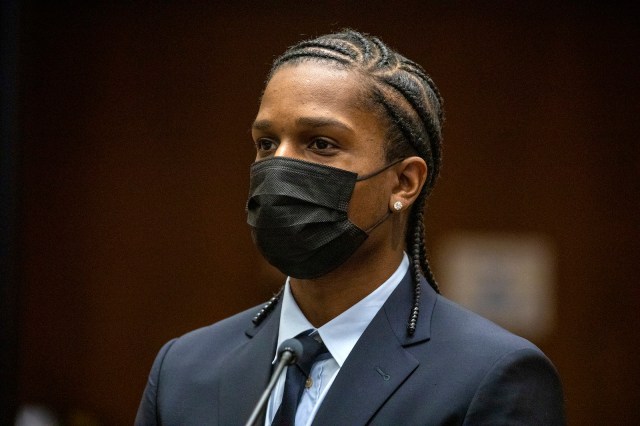 Extremely popular rapper A$AP Rocky entered a not guilty plea after being charged with felony assault with a firearm in 2021. The “F**kin Problems” rapper appeared in a Los Angeles Superior court on Wednesday wearing a gray suit and entered the plea with his lawyer present.

The rapper, whose real name is Rakim Mayers, was accused of firing a gun toward the direction of a former friend during a verbal altercation in November. He was charged with two counts of assault with a semiautomatic firearm and was ordered to stay away from the other party in the case.

Mayers reportedly fled the scene after the incident but was arrested at LAX on April 20. He made his $550,000 bail the same day.

District Attorney George Gascón told NPR that the incident could have been a lot worse.

“Discharging a gun in a public place is a serious offense that could have ended with tragic consequences not only for the person targeted but also for innocent bystanders visiting Hollywood. My office conducted a thorough review of the evidence in this case and determined that the addition of a special firearm allegation was warranted.”

Mayers is one of the most popular rappers in the world, with two number one albums under his belt and a relationship with superstar Rihanna, with whom he shares a son. If he’s found guilty of the charges he could face up to nine years in prison.

The victim in the case is a former friend of Mayers and a member of his A$AP collective named Terell Ephron. Rolling Stone reported that Ephron has filed a civil lawsuit against his former friend for assault, battery, and emotional distress.

Ephron said Mayers intentionally brought him somewhere obscure under the guise of talking through “a disagreement.” Ephron’s attorneys Jamal Tooson and Brian Hurwitz released a statement announcing the lawsuit.

“Unbeknownst to Mr. Ephron, A$AP Rocky was not just planning for a conversation and came armed with a semi-automatic handgun. After arriving at the location, a conversation ensued whereby without provocation, warning, or any justification, A$AP Rocky produced the handgun and intentionally fired multiple shots at Mr. Ephron.”

Mayers is due back in court on Nov. 2.