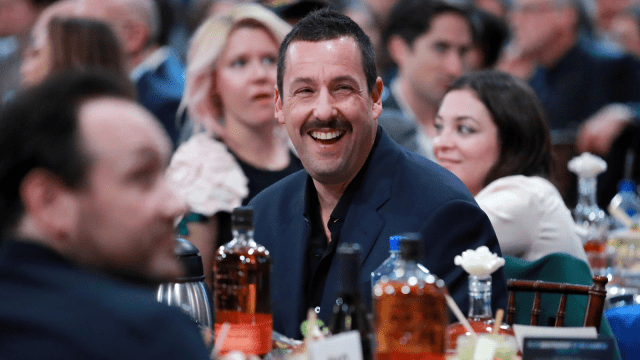 Adam Sandler went to The Louvre as a tourist but left as a piece of art during a recent trip to the world’s most visited museum. Of course, Sandler draws a crowd wherever he goes, but this time, it had a lot to do with his outfit of choice.

Sandler was serving his best Dad on a Hawaiian Holiday realness, and it stunned museum-goers who couldn’t take their eyes off of the newly added walking exhibit. Sandler stole the show in gold-brimmed sunglasses, a flowery button-up shirt tucked into tailor-made basketball shorts, and blue sneakers with white socks.

Other fans who met the star in Paris said he was with family, so the fit choice rings true.

Sandler does look like he’s prepared to step into a basketball game at any given moment and to be the most stylish one on the court.

Sandler’s sense of fashion can be described as follows: he wears what he wants when he wants, and he looks great doing it.

A starter jacket really would have pulled the whole look together, but with Sandler wearing this look in summer, we got to see more of the floral arrangement on the shirt. Either way, we’re winning.

In four words, Bobby Wagner said it best: Sandler is so cool.

Other videos uploaded to TikTok show that Sandler was there with his family. He also enjoyed other sights in Paris and a popular restaurant where he walked around saying hello to guests on his way out.

Sandler asked others at the eatery if they were enjoying their night before waving goodbye.

The Louvre didn’t expect to have an added exhibit when Sandler visited their establishment, but he certainly brought a new work of art to the museum.