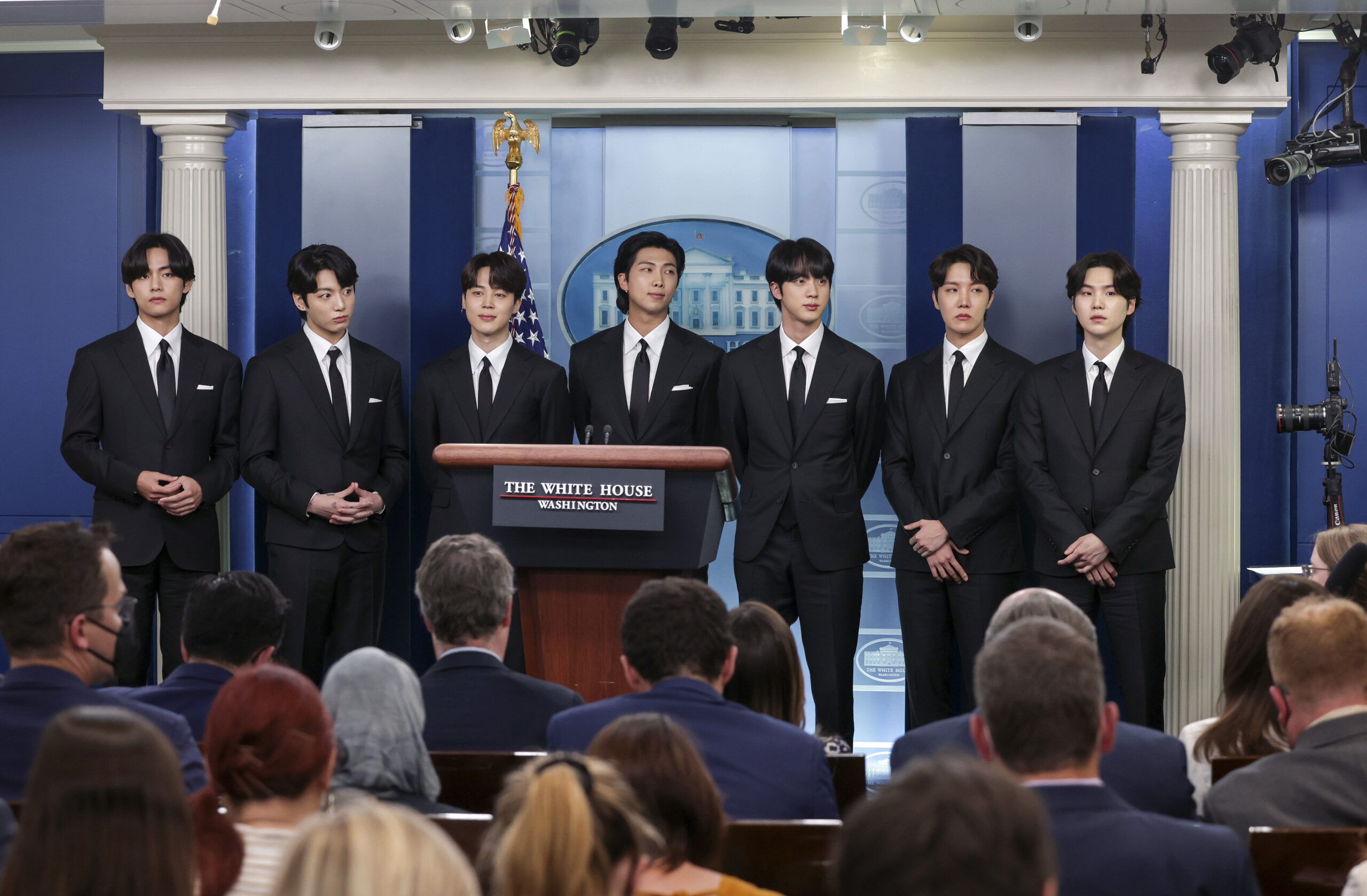 WASHINGTON, DC - MAY 31: (L-R) V, Jungkook, Jimin, RM, Jin, J-Hope and Suga of the South Korean pop group BTS speak at the daily press briefing at the White House on May 31, 2022 in Washington, DC. BTS met with U.S. President Joe Biden to discuss Asian inclusion and representation, and to discuss the recent rise in anti-Asian hate crimes. (Photo by Kevin Dietsch/Getty Images)

The White House in Washington D.C. had some very special guests deliver a powerful message during a recent White House Press Briefing. International K-pop sensation BTS made an appearance in the country’s capital to deliver an important message just at the end of AAPI Heritage Month.

“As you may know, BTS as Grammy Nominated Icons, they also play an important role as youth ambassadors promoting a message of respect and positivity.”

After the introduction, RM first went on the mic. He began by saying it’s a “great honor” to be invited to the White House to discuss important issues that resonated not only with them, but also with their fans. Each member took a turn on the mic to address the surge of Asian-American hate crimes in the U.S., and described how they want to use their platform and influence to give voice to these issues.

“Hi, we’re BTS. It is a great honor to be invited to the White House today to discuss the important issues of anti-Asian hate crimes, Asian inclusion and diversity,”

“…We were devastated by the recent surge of hate crimes including Asian-American hate crimes, but to put a stop to this and support the cause, we’d like to take this opportunity to voice ourselves once again.”

The K-pop group also spoke about how they still felt surprised that their music was able to reach plenty of people around the world, and that we should be open to embracing each other’s differences.

“We still feel surprised that music created by South Korean artists reaches so many people around the world, transcending languages and cultural barriers. We believe music is always an amazing and wonderful unifier of all things.”

“It’s not wrong to be different, and equality begins when we open up and embrace all of our differences,”

“Everyone has their own history. We hope today is one step forward to respecting and understanding each and every one as a valuable person.”

It was discovered recently by the Center for the Study of Hate and Extremism that Anti-Asian hate crime has increased by 339 percent in 2021 in the U.S. It was also revealed that some cities, including New York, San Francisco, and Los Angeles, surpassed their rates of specifically anti-Asian hate crimes in 2020.