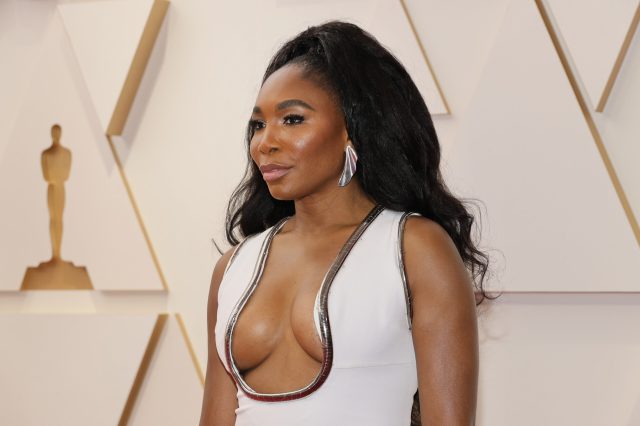 Venus Williams, tennis superstar and 7-time Grand Slam Singles Champion, is still looking for love. Maybe that’s a bad thing because “love” in tennis equates to nothing and Venus’ career is still very much alive. In fact, she surprisingly earned a wild card for doubles at this year’s Wimbledon, a surprise not for getting the wild card, but rather for the unexpected announcement as the tournament opened.

Venus is out of this world in tennis so once she retires, dating will likely come much easier. That doesn’t means she hasn’t taken a swing at it, but she hasn’t quite aced it either.

Now, before I run out of tennis puns, here’s Venus’ history of partners, not doubles partners, but rather love partners that we sometimes call boyfriends.

When Venus played at the Italian Open in 2001, one of her bodyguards was 25-year old was Davide Tomassoni. Venus was 21 at the time. They quickly fell for each other and a romance naturally ensued. It was like they were starring in their very own The Bodyguard movie.

Although Venus and Davide were able to meet up throughout the year to continue their cinematic romance, they eventually realized they were better as friends. Indeed, they truly did stay on good terms and Davide even worked for Venus’ sportswear company EleVen.

Pro Golfer and former US Amateur Champion, Hank Kuehne, began dating Venus in 2007. He even accompanied her to Wimbledon and the US Open that year.

Hank is the brother of Trip Kuehne who was also a successful amateur golfer. Trip famously had a 5-shot lead with 12 holes left in the 1994 US Amateur before an 18-year old named Tiger Woods staged a brilliant comeback to win.

When Hank and Venus began dating, Hank was 32 and Venus 27, but after 3 years together they broke it off, and Hank soon began dating his future wife Andy, marrying her the following year. Hank and Andy are still happily together.

Elio is a model who was born in Cuba and raised in Miami. He did photo shoots for Venus’ sportswear company and began dating Venus not too log afterwards.

They were clearly together during the 2012 US Open and had numerous public displays of affection there and at other tournaments. When they started dating, Elio was 23 and Venus 31.

Elio has appeared in French Vogue and has modeled for numerous brands, including doing work for Russell Simmons who owns multiple clothing lines.

Elio and Venus were together for 5 years before heading their separate ways.

Hammond is a millionaire financier who inherited quite the fortune thanks to his grandmother’s brother, Walter Annenberg, who owned Triangle Publications, which in turn owned hugely successful publications such as The Philadelphia Inquirer, Seventeen, and TV Guide. Hammond clearly grew up knowing his teenage heartthrobs, current news, and what was on TV.

Despite all the money and knowledge, Nicholas apparently wasn’t ready to settle down after 3 years and Venus was reportedly seeking a bigger commitment. The couple thus split in 2019.

Is the next time the charm?

During last year’s Wimbledon, Venus joked that she is, “Very single and might be undateable.”

Then, late last year, it was speculated by fans that she was dating fellow tennis player Reilly Opelka since they were often seen together. When fans asked her on social media if she was dating Reilly, she honestly responded by stating, “No. @ReillyOpelka shot me down.”

And so ended those rumors. Dude had the nerve shut down a Williams sister yet would probably be quick to be her mixed doubles partner.

I personally think that Venus should date fellow planetary-named Bruno Mars just so they can say that Mars and Venus are together. I mean, it’s definitely better than dating a guy named Uranus, if one even exists.

I really hope Venus finds happiness with another Earthling so that I can happily update this list with fairy tale ending that Venus deserves.