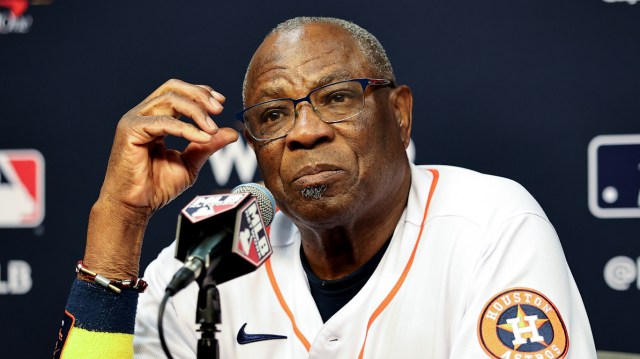 The manager of the team heavily favored to win the World Series, Dusty Baker, raised some eyebrows recently when he namechecked Bill Cosby as a friend.

Game 1 of the biggest series in Baseball begins tonight when the Philadelphia Phillies take on the Houston Astros for the national championship, and a lot of attention is understandably on Baker, who is one of only two Black Americans to currently manage a major league team.

Sports Illustrated senior writer Stephanie Apstein tweeted that she talked to Baker about who he’s heard from, and he gave an interesting answer that for some reason also included Snoop Dogg.

Yes, he considers Cosby a “homeboy,” despite the disgraced comedian’s low social standing following allegations of horrific behavior toward women over the course of his career. This of course prompted some concern from literally everybody.

This isn’t the first time Baker has expressed his friendship with Cosby publicly, either. Back in 2018 when he was leaving The Nationals, The Washington Post reported that “he rebuffed all interview requests, leaning on advice he received from friends such as Hank Aaron, Willie Mays, Bill Cosby and Tony Dungy…”

Here’s another reporter who spoke to Baker today:

Does this mean Cosby called Baker? Texted him? Sent him a carrier pigeon? We may never know, but Cosby’s name is not one to throw around lightly and either Baker doesn’t care or simply forgot…? Either way, it’s a terrible look that has everyone scratching their heads.

We’ll keep an eye on this one for you. Game 1 of the World Series airs tonight on Fox.