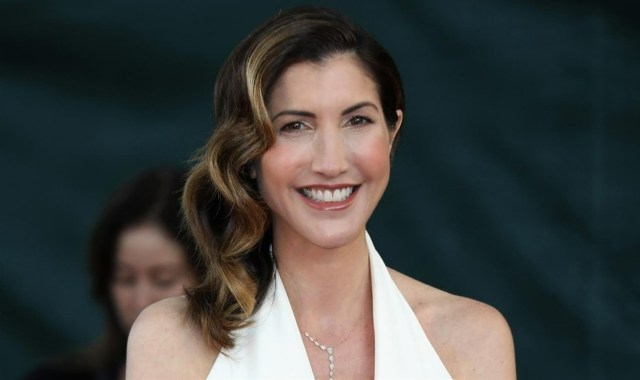 Adam Sandler often stars opposite some of Hollywood’s most beautiful women, including Jennifer Aniston, Drew Barrymore and Salma Hayek, but there’s one woman who has appeared in more Adam Sandler movies than any — his wife, Jackie.

Sandler is one of the most successful actors of all time, appearing in more than 80 movies and TV shows since 1987, when he made his big break on The Cosby Show. After becoming a regular cast member on Saturday Night Live, he became a household name and began appearing in comedies with his own unique style of humor that people either love or hate.

Jackie Sandler, née Titone, has been happily married to the Happy Gilmore actor for 19 years. The couple, who met on the set of Big Daddy, married in 2003 and have two daughters.

While some couples prefer to keep business and pleasure separate, that’s not the case for Adam and Jackie Sandler. The couple has appeared in 23 films together, including some of Sandler’s biggest hits. Clearly, they love working together, and Jackie encourages her husband to “get in there” while kissing his beautiful leading ladies.

“The best thing is that my wife loves Drew (Barrymore) so much, that she, like, encourages me. There’s no jealousy at all, she’s like ‘Get in there,’” Sandler told Ellen DeGeneres in a joint interview with Barrymore. “Please, for the sake of women, get in there and just look a little more alive.”

While most people never knew the identity of the beautiful brunette who often appears in Sandler’s movies, she has been hidden in plain sight the entire time. While she could be dubbed the queen of cameos, here are all the movies she has appeared in with her husband.

Jackie portrays a waitress who asked Julian (Cole and Dylan Sprouse) why he was at the bar during a scene for Big Daddy, after which Sandler’s Sonny Koufax playfully teases the kid about the pretty waitress. Big Daddy is about a man (Sandler) with nothing going on in his life, who becomes a foster father for his roommate’s son.

In this comedy, Jackie stars as Jenna, an angel friend of Nicky’s mother’s (Reese Witherspoon) in Heaven. Little Nicky stars Sandler as the titular character, who happens to be the son of the devil and an angel.

Starring as his romantic leading lady, Jackie provides the voice for Jennifer in Eight Crazy Nights, Sandler’s adult animated musical film about the Jewish celebration of Hanukkah. The movie features music written and performed by Sandler himself.

In the romantic comedy 50 First Dates, Sandler stars opposite Drew Barrymore — his frequent co-star and love interest — while Jackie plays a jilted dentist whom Sandler’s character Henry Roth romanced and then dumped while she vacationed in Hawaii. The movie is about a man who ends up falling for a smart, quirky, funny woman who can’t remember him the next day because she has short-term memory loss.

I Now Pronounce You Chuck & Larry

Jackie stars as Tori Valentine’s (Shelby Adamowsky) school teacher in Sandler’s buddy comedy flick with Kevin James, I Now Pronounce You Chuck & Larry. The movie is about two straight firefighters who pretend to be gay in order to receive domestic partner benefits.

You Don’t Mess With the Zohan

In this raunchy comedy, Jackie plays a mom standing in line for the goat ride. This film is about an Israeli Special Defense soldier who fakes his death and comes to America so he can fulfill his dream of becoming a hairstylist. Business is booming as word spreads that his hair cuts come with a “happy ending.”

Sandler’s daughter Sadie stars alongside her parents in Sandler’s first family movie, Bedtime Stories, with Jackie playing Lady Jacqueline and Sadie starring as the “sweetest medieval girl of all time.” In this Walt Disney Pictures film, Sandler plays a handyman whose bedtime stories to his nephew start coming to life.

Jackie stars as Tardio’s (Riche Minervini) wife in the movie Grown Ups. The movie is about a group of men who reunite to remember the life of their former basketball coach, who passed away. Sandler’s two daughters — Sunny and Sadie — also appear in the movie as Tardio’s daughters.

Just Go With It

In Sandler’s romantic comedy with Jennifer Aniston and Brooklyn Decker, Jackie stars as Veruca, Sandler’s former fiancé who only planned to marry him because he would be a wealthy doctor. Twenty-three years later, Sandler is a plastic surgeon who pretends to be in an unhappy marriage in order to get women. He meets Palmer (Decker), who decides she wants to meet his faux soon-to-be-ex-wife, so Sandler requests the assistance of his office manager Katherine (Aniston) to “just got with it.”

Jackie plays the TGI Friday’s waitress who is stunned when she has to wait on Bernie the gorilla (voiced by Nick Nolte) and Kevin James as Griffin Keyes. Griffin is a zookeeper who starts talking to the animals he cares for, including Bernie the gorilla, Joe the lion (Sylvester Stallone), Janet the lioness (Cher) and Donald the tufted capuchin monkey (Sandler).

In this comedy, Jackie portrays a masseuse that Sandler’s Donny Berger hits on while she attempts to give him a massage. The movie is about a middle-aged alcoholic who tries to repair his relationship with his son (Andy Samberg).

Jackie lends her voice acting to the role of Dracula’s (Sandler) true love Martha in the hit animated film Hotel Transylvania. The character of Jackie was killed in a fire by humans, so Dracula believes all humans are evil.

Jackie, Sunny, and Sadie all return as Tardio’s family in this 2013 sequel to Grown Ups. Lenny (Sandler) decides to move his family to his hometown, where he faces off with old high school bullies.

The romantic comedy Blended, starring Sandler and Barrymore, guest stars Jackie, Sadie, Sunny, along with Sandler’s mom Judith. Jim and Lauren (Sandler and Barrymore) are two single parents who go on a disastrous blind date. They’re shocked when they both end up vacationing with their respective families in Africa. That’s when sparks finally start flying for the couple.

Sandler once again makes it a family affair in the science-fiction comedy Pixels, as Jackie stars as the president’s (Kevin James) assistant, Sadie stars as Lemonade Sadie, and Sunny stars as a Girl Scout. The movie is about aliens who misinterpret old video games as a threat and declare war on Earth.

Sandler teams up with David Spade in this buddy comedy about two men who decide to fake their deaths. Jackie plays Joan, and Sadie and Sunny play Auto Store Lou’s kids. Hilarity ensues when they discover that the dead men they stole identities from were involved in illegal activities.

In this comedy about the eccentricities of show business, Jackie stars as Amy Baskin, an actress discovered by talent manager Sandy Wexler (Sandler). Wexler is known for telling huge lies and not being trustworthy.

Jackie stars as Lisa in this comedy with Sandler and comedian Chris Rock about two dads who prepare for their children to marry one another. One rich father (Rock) and one poor father (Sandler) try to find common ground to give their kids the wedding of their dreams.

Jackie appears as a flight attendant in the romantic action comedy Murder Mystery, starring Aniston as Sandler’s on-screen wife. The movie is about a married couple vacationing in Europe and wind up as the prime suspects in a murder.

Dressed up in a skimpy Harley Quinn outfit, Jackie appears in this Halloween comedy as a TV news correspondent, who later takes her daughter (Sadie Sandler) trick-or-treating, where Hubie (Sandler) berates her for taking more than one piece of candy. This funny Halloween movie has bits of mystery, romance, and is safe for children to watch.

You Are SO Not Invited to My Bat Mitzvah!

Jackie will once again star alongside her husband in the upcoming coming-of-age story You Are SO Not Invited to My Bat Mitzvah! The Netflix film is inspired by the Fiona Rosenbloom book of the same name. The movie is expected to air on Netflix during the first half of 2023.