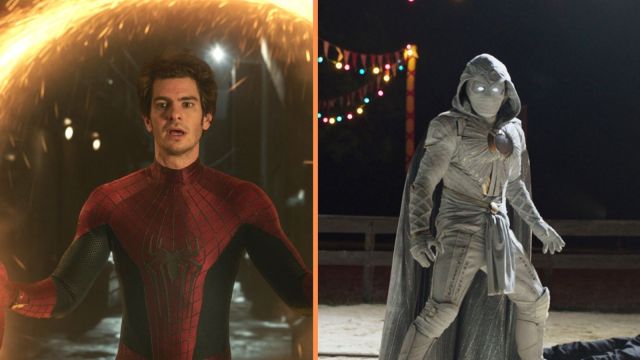 Andrew Garfield and Oscar Isaac have Marvel fans feasting as they united for the first time at the 2022 Emmys.

Isaac has only just made his debut in the Marvel Cinematic Universe canon as Marc Spector / Moon Knight but is already feeling the family vibes as he was photographed with three-time Spider-Man actor Andrew Garfield. The two were competing in the same category at the Primetime Emmys, as they engaged in a tussle for Outstanding Lead Actor in a Limited or Anthology Series or Movie but lost out to Michael Keaton.

Garfield had given a splendid performance in Under the Banner of Heaven as a rural detective, meanwhile, Isaac was up for Scenes from a Marriage but may be looking to double down next year when Moon Knight is eligible for a gong. The photo of the two together sparked love online, as fans got to see two favorites combine for potentially the only time.

The reaction was anything but subdued, as hardcore fans relished the combination and got the thirst on. Isaac has proudly tried to claim the throne of Daddy king in the past, with him at constant war with The Mandalorian’s Pedro Pascal, but who knows what Garfield has up his sleeve over the next decade.

Splatoon textbox memes also made their way into the fold, as the famous “kissing men on the mouth” meme were front and center in the quote replies.

Perhaps the duo will meet in a future Marvel crossover, with fans generally expecting Garfield to return as Spider-Man again in the Multiverse Saga. Meanwhile, Moon Knight will be getting a second season on Disney Plus.