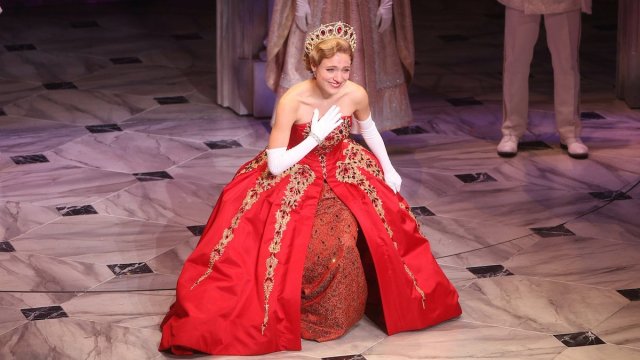 Christy Altomare is a stage actress best known for her work in the Broadway community. Starring in shows such as Spring Awakening, Mamma Mia, and originating the role of ‘Anya’ in Anastasia, she’s more than a force and is even earning princess status as she joins the Disney Princess in Concert tour by Disney music this year.

On Saturday, Sept. 17, Christy entered a new journey where she tied the knot with an old friend from middle school after they reunited in 2021. Their story is something straight out of a rom-com and truly a fairytale come to life. In 2021, Altomare returned to her hometown in Pennsylvania for her first solo concert. Unbeknownst to her, her middle school crush was in the audience to see her perform.

Chris Cook admits to having a crush on Altomare back in middle school, but he never thought the timing was right. Eventually the two reconnected and began dating. They eventually got engaged, and now they’ve tied the knot. Christy Altomare being the sweetheart she is found herself feeling called back to one of her first Broadway gigs, Mamma Mia. In it, she played the leading role of Sophie who, in the show, is getting married. Altomare was getting her real life Mamma Mia moment, and her friends knew they had to document it.

On Michael Hull’s story, we got to see snippets of Altomare’s wedding day and night, but the best insider we got was this amazing recreation of the original Mamma Mia playbill. Mamma Mia has become a worldwide phenomenon after the release of the movie version and its sequel, Mamma Mia: Here We Go Again. With music by Abba and a touching story about family and love, how could it not be a fan favorite?

This recreation just shows Altomare’s dedication and love for her career and her past roles as well as how much fun she was having on her and Cook’s special day. Truly there is nothing more magical than finding yourself in a character, especially one that you’ve played, and getting a chance to be in their shoes in your real life. It’s a full circle moment and one that we’re sure Altomare will never forget.