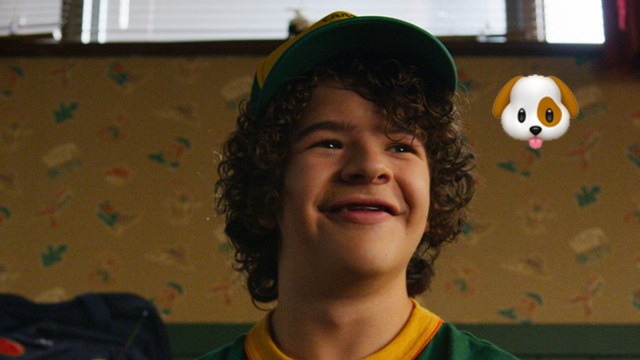 In extremely on-brand news for the Stranger Things cast, Gaten Matarazzo apparently adopted a stray dog he found on set of the show’s fourth season. Bless him.

Breakout star and Doja Cat‘s new crush Joseph Quinn told co-star Jamie Campbell Bower and Brazilian YouTube channel Foquinha that Matarazzo found the dog at the trailer park area on set. He then took it in.

“It’s very revealing of Gaten’s very large heart. And yeah, I think he now has that dog, that’s kinda a pretty funny thing.”

Campbell Bower, who was unaware of this story before Quinn brought it up in the interview, then chimed in.

Funnily enough, a baby-faced Matarazzo told an interviewer back in 2016 via Twitter he wanted Dustin to have a dog because he wanted to hug one.

In other news, Thor: Love and Thunder director Taika Waititi felt the need to say that the show ruined Kate Bush‘s iconic track “Running Up That Hill”. Okay, Korg.

You can catch Stranger Things on Netflix.