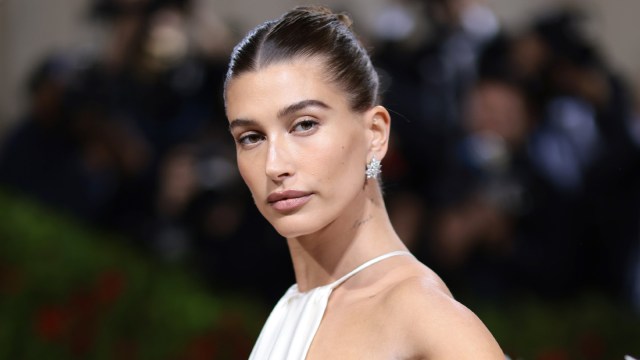 Hailey Bieber launched her own line of curated skincare essentials called Rhode Skin earlier this month, which consists of a Barrier Restore Cream, Peptide Glazing Fluid, and three different flavors of a Peptide Lip Treatment. Because if anyone knows a thing or two about keeping skin young and healthy, it’s a 25-year-old model with flawless genes who won’t need to seriously worry about aging for at least another decade or so.

“Dewy summer skin loading … hydration is always essential,” Bieber captioned an Instagram post on Sunday, along with a gallery of photos from a recent trip to the Bahamas with her husband of nearly four years, Justin Bieber.

In addition to copious product shots, Bieber also posted a few of herself modeling various bikinis, each seemingly skimpier than the last. She also posted a photo of her famous hubby with his face obscured by a bucket hat, pouring a glass of wine during an idyllic beach picnic.

In a founder’s note on the Rhode Skin website, Bieber explained why healthy skin is a subject near and dear to her heart.

“My journey towards healthier skin inspired me to develop products that really work, in a way that’s accessible to everyone,” she wrote. “Rhode is dedicated to making products based in science and great formulation, simplifying many of the mysteries and complex narratives behind efficacious skincare. I hope these will become your go-to essentials that can live in your bathroom, be your favorite travel companion, improve your skin over time, and keep your skin happy and hydrated.”

Currently, all of the products featured on the website, which retail for between $16 and $29, are on waitlist following the brand’s June 15 launch.

According to The Daily Mail, Bieber is already being sued for trademark infringement over her skincare line by two women who created a clothing line called Rhode back in 2013. In their complaint, the duo — who have dressed celebrities such as Beyoncé, Tracey Ellis Ross, and Lupita Nyong’o — said that Bieber had attempted to acquire their name; however, they refused. Bieber named the company after her middle name, but the two women hope that she’ll come to her senses and “understand the harm we’re sure she never meant to cause.”

The skincare line is just Bieber’s latest branding endeavor. Previously, in 2016, when she was still going by her maiden name Baldwin, Hailey slapped her name on a handbag collection with the clothing brand The Daily Edited as well as a collaboration with the UK footwear brand Public Desire and her own line of cosmetics with the Australian beauty company ModelCo that same year.