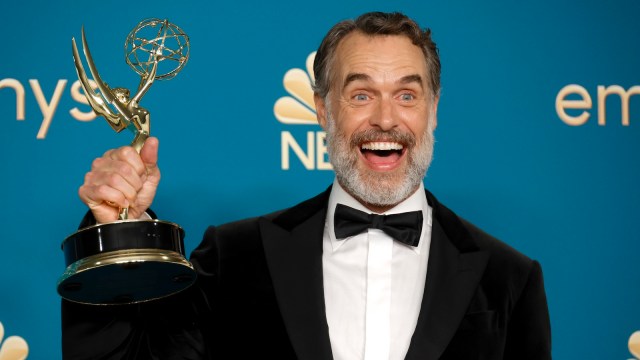 While we didn’t get as many high drama moments as this year’s Oscars at last night’s Emmy ceremony, the night was not without its surprises, and perhaps one of the biggest was dark horse Outstanding Supporting Actor nominee Murray Bartlett taking home the gold for his performance in the acclaimed The White Lotus. But while his performance as hotel manager Armond has raised his Q rating, many viewers are wondering just where else they’ve seen Bartlett in action before.

The 51-year-old Aussie actor has been acting professionally since making his debut at 16 in the Australian drama The Flying Doctors. Bartlett’s worked steadily ever since but his star didn’t begin to rise until the early 2000s.

Sex and the City

After several years as a working actor down under, Bartlett finally found crossover success with an appearance in Sex and the City in 2002 as Oliver Spencer, a gay shoe distributor who became Carrie’s gay Australian temporary bestie in the fourth season episode “All That Glitters.”  The part allowed Bartlett to stay in the states and also scored him an agent.

Bartlett scored more work in the U.S. on the strength of his SATC appearance and soon landed the role of Cyrus Foley on the long-running soap Guiding Light. He played the roguish thief-turned-criminal “consultant” (and bus boy) on the series for two years before departing for greener pastures.

Bartlett took on his most significant role yet in Looking where he played lifelong waiter/sommelier Dom Basaluzzo for all sixteen episodes of the series. Bartlett was drawn to play the dissatisfied and lovelorn Dom for the rare opportunity to play a gay man in his forties on TV (Bartlett is also openly gay). Dom was, to his mind, a sort of spiritual opposite, and a chance to play someone that, “for the grace of God” could easily have been himself.

Tales of the City

Bartlett appeared in his first Netflix project in 2019’s relaunch of Armistead Maupin’s Tales of the City series, picking up the story after 2001’s Further Tales of the City. Bartlett played Michael “Mouse” Tolliver, best friend of protagonist Mary Ann Singleton and erstwhile dweller at the series locus, the boarding house of Anna Madrigal at 28 Barbary Lane. According to the New York Post, Bartlett was a fan of the original show, having lived in San Francisco himself in the 1990s. “What I felt connected to was the sense of family in Barbary Lane,” he says. “I was in my 20s. I don’t know if [it was because] I was similar to Michael Tolliver or where he was at in his life. The show had such a beautiful sense of community and I felt that when I came here.”

In one of his most recent efforts, Bartlett joined the cast of Apple TV Plus’ Physical for its second season which aired this summer. Bartlett plays aerobics instructor Vinnie Green in the series. The relentless and exuberant infomercial guru served as an antagonist for Rose Byrne’s Sheila Rubin. Even if you didn’t remember him for his critically-lauded performance, you would definitely remember those workout shorts.