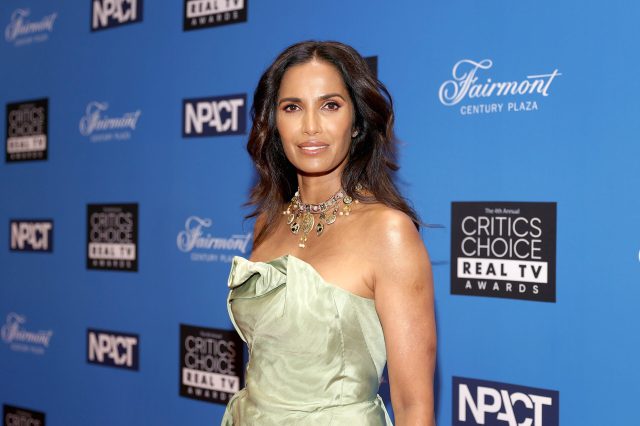 It is impossible to go through this journey called life without getting scars of some kind. Padma Lakshmi’s scar is both physical and connected to a traumatic event — she has a noticeable 7 inch scar on her right arm. She has grown to accept and appreciate her scar but this was not always the case. Before we discuss how she got this mark, let’s take a look at her life and career.

Who is Padma Lakshmi?

Padma Lakshmi is the very definition of a multi-hyphenate. She was born in India but grew up in the United States of America. She attended Clark University and studied Theater Arts and American Literature. She started off as a model and actress, and she is known as India’s first supermodel. From there she moved into hosting and created a food niche for herself. One of her first shows was Padma’s Passport in which she demonstrated how to cook diverse recipes from around the world. This would lead her to her best known credit as the host for Top Chef. She has written many cookbooks including Easy Exotic. She is an entrepreneur with her own jewelry and home decor lines called The Padma Collection. She works as an activist for women’s and immigrant rights. She is the ex-wife of author Salman Rushdie. She shares a daughter named Krishna with Adam Dell.

How did she get the scar?

Padma and her parents were in a horrible car accident when she was just 14 years old. The car fell 40 feet off the freeway into a tree. Padma wrote about the experience in an essay for Vogue Magazine: “There was a loud bang, and I looked out the windshield and saw nothing but the prettiest blue sky. Our red Ford Mercury sedan was airborne.” Padma and her parents were trapped in the car for 40 minutes while first responders used the jaws of life to get them out.

At first Padma was awake. She recalled, “A helicopter landed in the middle of the highway to take my parents away. An ambulance carried me to the hospital. I finally passed out.” She went on to say, “When I woke up hours later, I had tubes coming out of several places in my body. My right arm had been shattered and my right hip had been fractured. After surgery, I regained the use of both of them but was left with a long scar on my arm.”

From shame to acceptance

Padma was self-conscious about her scar for a long time. When she was modeling, she actively worked to hide it with make-up. She taught herself how to pose on red carpets so the scar was not visible. After time went on, she learned to accept her scar as part of who she was. She told Self in 2016, “My body is almost a map of my life, for good and bad. My attitude about my body has grown and changed and morphed and evolved, as has my body.”

This new attitude also extended all scars, not just the one on her arm. She has embraced them all, saying, “It’s what sets me apart and makes me me.” She added, “Even if someone could wave a magic wand, I really don’t think I would choose to eliminate my scar.”

Padma continues to pursue many diverse creative outlets. She is returning to host Top Chef for the upcoming season. Season 20 is set in London and will be the first season shot entirely abroad. It has already started filming and is set to air in 2023. Padma is lending her voice to the new Disney Plus series Firebird as the character Chef Pavani. The series centers around the children of first responders and talking cars who help the community. It is the brainchild of Craig Gerber, whose credits also include Sofia the First and Elena of Avalor.

Padma also continues her activism work. She is an ambassador for the ACLU and a UNDP Goodwill Ambassador. In 2021, she was named the Global Advocate of the Year by the United Nations Correspondents Association. Padma co-founded the The Endometriosis Foundation of America in 2009 and continues to work with the organization to raise awareness about this condition.

Evidently, he scar on her arm does not prevent her from accomplishing anything.