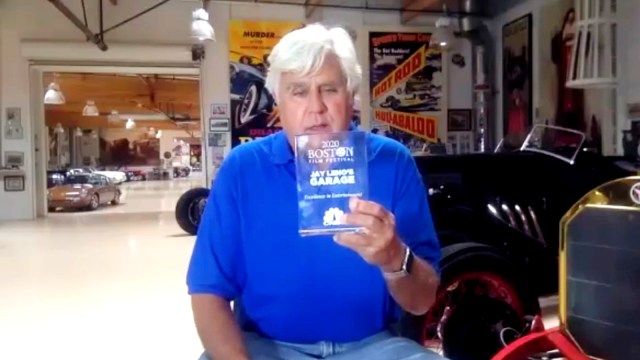 Former Tonight Show host Jay Leno has reportedly been hospitalized with serious burns to his face after one of his beloved cars apparently exploded into flames in a freak accident on Sunday.

The 72-year-old is known for his love of classic vehicles and owns close to 300 cars and motorbikes, which he keeps stored in his Los Angeles garage. He has also hosted the NBC reality series Jay Leno’s Garage since 2014, in which he reviews classic, vintage, and restored cars and sports cars.

According to TMZ, which broke the news on Monday, Leno’s injuries are extensive to the point that he was transferred to a burn center, and he has since canceled all of his public engagements for at least the rest of the week.

Jay was in the L.A. garage where he stores his cars on Sunday when one of the cars erupted into flames without warning. Sources with direct knowledge tell TMZ … the flames burned the left side of Jay’s face, but thankfully did not penetrate his eye or his ear.

He was taken to the burn ward at Grossman Burn Center where he remains. We do not specifically know his condition but it is serious enough that he’s been admitted to the hospital.

The news comes as Leno was absent from a scheduled appearance at the 2022 Financial Brand Forum in Las Vegas on Sunday night. Conference attendees were alerted by email that Leno had to drop out due to a “very serious medical emergency.”

“His family was not able to provide us very many details, but there was a very serious medical emergency that is preventing Jay from traveling,” read an email, which was obtained by People. “All we know is that he is alive, so our prayers go out to him and his family tonight.”

It’s presently unclear which of Leno’s vehicles malfunctioned and why. It’s possible he had been working on it at the time since he was in close enough proximity to sustain such serious injuries.