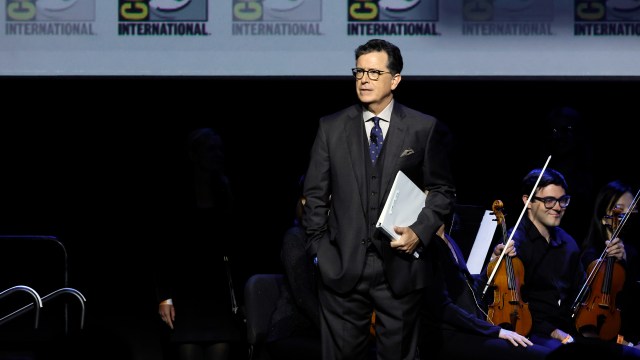 Stephen Colbert, one of the biggest Lord of the Rings nerds on the planet, is living the actual dream and moderating the Lord of the Rings: The Rings of Power panel at this year’s Comic-Con.

The beloved political commentator and genuine Tolkien expert surprised guests at the official Rings of Power panel on July 22, sauntering out onto stage to host the highly-anticipated event.

The renowned comedian has spent years thirsting after J.R.R. Tolkien’s genre-defining series, displaying his knowledge at multiple points via his celebrated late night talk shows. He even trounced Peter Jackson, Dominic Monaghan, and Billy Boyd — the director and two of the stars of the Lord of the Rings trilogy — at Lord of the Rings trivia, tackling most of their extremely challenging questions without a single ounce of effort.

Colbert’s long-established love for Tolkien’s work makes him the perfect choice to host the Rings of Power event, and fans couldn’t be happier about the decision. They’re already celebrating his involvement online, where minute details about the event are leaking via excited tweets.

Details around the Rings of Power event are still scarce — for those of us not in physical attendance — but it isn’t stopping hype from building online. Colbert reportedly informed audiences that he’s seen a portion of the show’s first season, and describes it as a “story of loss.” Numerous tweets are pointing to his words with a mixture of excitement and anxiety, as fans count the days until the show officially arrives on Amazon Prime.

In the meantime, please enjoy this clip of Colbert putting the rest of us Lord of the Rings fans to shame.

Viewers interested in enjoying the livestream for Rings of Power‘s official event can watch it on YouTube, where it goes live at 12:30pm Pacific Time.