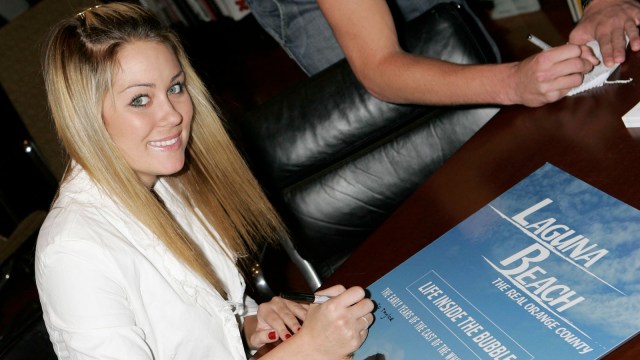 This one’s going to be hard for some of you to hear but apparently some of the romance drama on the reality show Laguna Beach was staged. Lauren Conrad, one of the stars of the aughts teen drama, recently revealed that producers didn’t want her dating anyone else during the show.

Conrad, who is 36 but was a high schooler when Laguna Beach was filmed, said the love triangle between costars Kristin Cavallari and Stephen Colletti was mostly manufactured and that she was also dating other people at the time, something discouraged by the producers.

Conrad appeared on the podcast Back to the Beach with Kristin and Stephen and provided a little insight into the supposed achingly important romance.

“I think they took a small piece of me and used it,” Conrad said. “Like, I’m often kind of off in a corner just, like, creepily watching you guys. Which is kind of embarrassing.”

She added that she was definitely dating during the time she was supposedly pining for Colletti.

“I had several boyfriends during this time. Which I’m like, ‘I feel so bad for them if they ever watch this [and see me] just, like, going after this guy,” she said. Cavallari said  “Yeah, they really hammered the love triangle home.”

Conrad replied that producers “didn’t want me to have anything else.” What made it even weirder was that the two stars narrated their respective seasons of the show, even though they were reading something written by someone else.

“Like, they write you a script,” Conrad said. “And you’re like ‘Okay, guess this is what I read.'”

Turns out Colletti and Conrad had previously dated… in the seventh grade.

“You broke up with me after two weeks,” he said on the podcast. “I still remember, because you were in your Halloween costume. I think it was, like, Supergirl or something.”

Conrad said she never pushed back against the narrative of the show because “I don’t think I understood I was allowed to. I think there was probably a few things I would say, ‘I don’t think this is right,’ or, ‘I feel uncomfortable.’ But I think, because you’re so young, and you were like, ‘Well, this is what I signed up for. This is your job.'”

By the time Conrad made it to the follow up show The Hills, she said she had no issue voicing her opinions, revealing that she “pushed back all the time.”

Cavallari said she thought she was the only one dealing with creative editing, but after doing the podcast “realized everyone was in the same boat.”