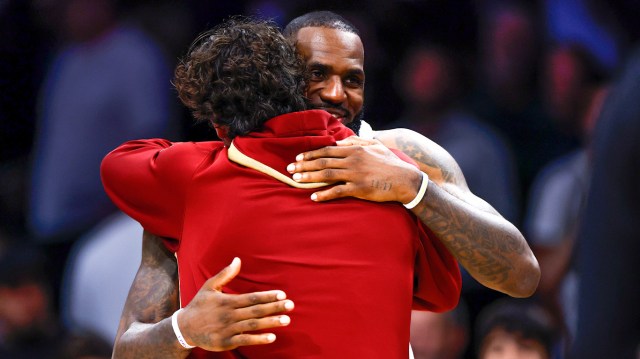 NBA star Kyrie Irving got support from one of his own on Thursday when Lebron James spoke out in support of the Brooklyn Nets point guard after he was suspended for promoting an antisemitic movie on his Twitter page.

The two played together for three seasons on the Cleveland Cavaliers and won the NBA championship together in 2016. LeBron said he thought Irving’s punishment was too harsh.

“I told you guys that I don’t believe in sharing hurtful information. And I’ll continue to be that way, but Kyrie apologized and he should be able to play. That’s what I think. It’s that simple. Help him learn — but he should be playing. What he’s asked to do to get back on.”

Support from one of the most famous basketball players of all times is sure to turn some heads, and the move caused a lot of discussion on a post about Lebron’s comments on Reddit. “If Kyrie apologized the first time in front of the media, he would be playing,” one person said.

That’s the thing that’s boggling so many minds; the fact that he was given every chance to apologize and didn’t, said someone else.

“This is what blows my mind about the entire situation. All he had to do was say ‘my bad guys, I didn’t realize that was in there and I made a mistake. I apologize’ and it would have all been done. Instead he acted like a child and got himself in more trouble.”

Another user on Reddit said, “He truly believes jews are fake jews and will not apologize for it, that’s the problem with him.” Another commenter said literally all Irving has to do is say the right thing. He doesn’t even have to believe it.

“That’s literally all we are really trying to achieve, no one thinks Kyrie is actually going to change what he believes. But he has to say the right thing publicly, he has to to toe the line, he has to ‘behave’. It’s all about public perception. You’d have to be delusional to not see that.”

The movie Irving shared is called Hebrews to Negroes: Wake Up Black America! and one commenter thinks Irving truly believes what’s stated in the movie.

“Kyrie does believe in the stuff in that movie, he just doesn’t think that what’s in the movie is anti-semitic. And that’s his problem. The media asked this man a simple question, ‘Are you Anti-semitic, yes or no?’ This man replied ‘I can’t be anti-semitic if I know where I come from’ Like dawg, just say no! I’m tryna watch you play, not argue with the media on who are the true jewish [sic] people.”

Irving’s ban is currently indefinite, but the team gave him a list of conditions to follow if he wants to be reinstated.

It’s not known if Irving has or will comply with any of the requests. We’ll keep you posted on developments.