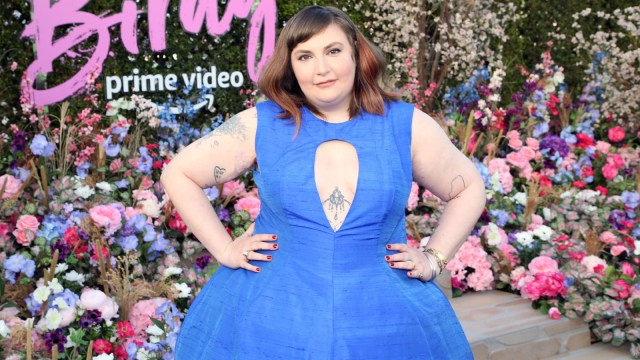 Lena Dunham has finally addressed the so-called “feud” between herself and former child star Melissa Joan Hart, after the rumor mill got so out of control that Hart recently took to Instagram to deny the rumors.

Earlier this month, Deuxmoi, online purveyors of celebrity gossip, shared an anonymous tip claiming that Dunham and Hart had been longtime “frenemies” going back to when the Girls star’s father was friends with Clarissa Explains It All creator Mitchell Kriegman. According to the dubious account, the feud apparently was taken to the next level when Dunham and Hart got into an argument at a dinner party about “child drag queens,” which to be fair … does sound like something Lena Dunham would have an opinion on.

A follow-up anonymous submission claimed that Anjelica Huston corroborated the feud, and likewise had some “very nasty” things to say about Dunham, after having worked with Hart on the 2017 Lifetime movie, The Watcher in the Woods.

At that point, however, Hart decided enough was enough and decided to fire back in an Instagram post.

“So I don’t normally pay any attention to the tabloid rumor mill but numerous friends have asked me about my ‘rivalry’ with Lena Dunham and I’m truly confused,” she wrote, sharing the screenshots. “We have no ‘beef,’ and as far as I remember we haven’t even had the pleasure of meeting let alone having enough of a relationship to warrant any time to discuss drag queens.”

“Don’t let them get you with flashy links as they pretend to give you hot gossip that doesn’t exist,” she continued. “I’m a fan of Lena’s work and all that she does to support females in our industry and hope to share a latte someday. Please be careful not to get caught up in the hateful rhetoric of these sites that promote division and spew crap to make a profit.”

On Tuesday, Dunham weighed in on the nonexistent feud during an appearance on the Who? Weekly celebrity gossip podcast, of which she is evidently a longtime fan.

The 36-year-old said that she couldn’t help but call in after hearing about the alleged feud on that very podcast. And although she says she was initially not going to comment, she said she couldn’t help giving an exclusive.

As Dunham explained, she initially only found out about the feud because of Hart. “So obviously, like, I don’t have a feud with anyone, I live in London and barely leave my home,” she explained. “That being said, to clarify a few points, I have never met Melissa Joan Hart, I’ve never been in a room with her, never seen her. I did see all of Clarissa Explains It All and all of Sabrina the Teenage Witch. I’ve also never met Anjelica Huston.”

Dunham did admit that her father did indeed used to play tennis with Kriegman, who gifted her a Clarissa Explains It All denim jacket when she was seven years old — but for what it’s worth, she has never met Kriegman either.

“So, having never met any of the people involved in this story, and having barely exited my home since the year 2018, it was definitely a surprise,” she continued. “And I’m not gonna say it didn’t tickle me, because I am a consumer of fake gossip. And so it’s always interesting to me to see how the sausage gets made, and then to hear you guys eat the sausage and spit it back out and make something new with it.”

Dunham finished her thoughts by sending love to everyone, “including Melissa Joan Hart.”

Hart likewise echoed Dunham’s comments on the rumors in an interview with Entertainment Tonight last week.

“It’s rare that I find that hate. I don’t seek it out, but I certainly did recently, just to see if there was there something that I did say,” Hart told the website. “Why would I say something about it? I’ve never mentioned her, I’ve never crossed paths with her. So, it’s just bizarre how social media or the media, in general, can just take something and spin it out.”

Well, now that they’re both aware that they don’t hate one another, perhaps this is the start of a beautiful friendship. Let’s hope their future dinner parties are fun and breezy and free of child drag queen discourse.