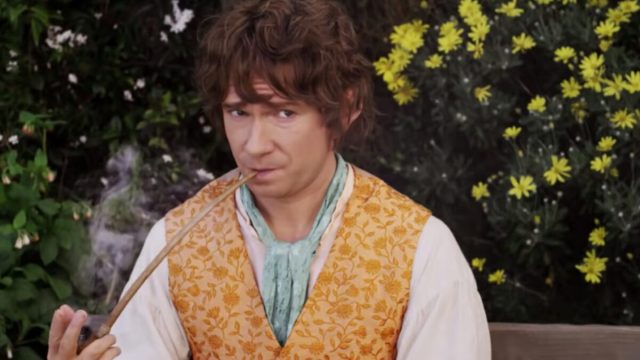 Could Martin Freeman make an appearance in The Lord of the Rings: The Rings of Power?

The popular actor behind the Hobbit trilogy’s Bilbo Baggins addressed the potential of his character returning to the franchise in a recent interview with Metro. Freeman expressed high hopes for the series, noting the enduring popularity of stories set in the Lord of the Rings universe, but stopped short of teasing an actual cameo in the upcoming Rings of Power.

“Whether I would do it again, it would really depend on who was doing it and why I suppose,” Freeman went on to say. “If it didn’t look conspicuous and if it wasn’t jarring, then maybe so, but anything that pulled the viewer out and [made them] go, ‘Well, that’s a different version,’ that might be a bit weird. But as with all those things, it depends on who the minds are behind it.”

Freeman’s words seem to indicate that, for the right story, setting, and creative team, he would return to the Lord of the Rings universe. This is tantalizing news for many of the franchise’s fans, who would be delighted to see the 50-year-old actor bring Bilbo to life once again.

His presence in the Rings of Power series, however, would make little sense to the plot and setting. The series is set in the Second Age, centuries before Bilbo was born. In fact, Hobbits weren’t really a part of Middle-earth in the Second Age. While they had certainly been settled in Arda for several generations before they were discovered, the first Hobbits weren’t really acknowledged in Tolkien’s writings until early in the Third Age.

Beyond that, the Rings of Power story is entirely separate from the Hobbits and their lives. Each of the existing Lord of the Rings releases is a self-contained saga, one that relies heavily upon its titular Hobbit (or Hobbits), but it’s well established that this is not the norm. To thoughtlessly toss a Hobbit into the Rings of Power story would invalidate the unique qualities that made Bilbo, Frodo, Sam, and their friends such unlikely heroes in their own times.

A flash-forward is not impossible, but it still seems unlikely. There’s little that such an add-in could accomplish, story-wise, and we hope the creators behind Amazon Prime’s upcoming series aren’t gearing up to deliver fan service purely for the sake of it. The franchise deserves better than that.