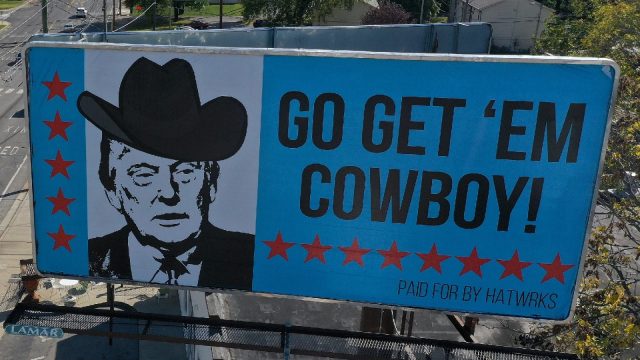 News that former president Donald Trump once again intends to run for the highest office in the nation is sparking widespread concern among the businessman’s many, many detractors.

Trump was a truly disastrous president. He tanked the affordable care act, leaving millions of Americans without health insurance or any affordable path to coverage, bungled his handling of the COVID-19 pandemic, leaving a sea of bodies in his wake, and implemented inhumane immigration policies, separating children from their families and threatening Dreamers with deportation. All of that was long before the days of election denying and inciting insurrections, the cherries that topped off one of the worst presidencies in American history.

Now — with news that Trump will once again be on the presidential ballot — Americans are faced with a frightening choice. Back in 2016, there were a huge number of people who would openly claim that Trump could never be president. But then he was. Now, we must confront the fact that, if we elected him once, it’s entirely possible — likely, even — that we will elect him again. Trump could return to office in 2025, and the implications for the United States as a whole are truly daunting, should this come to pass.

So, we’ve decided to take the cynical route, and examine the truly atrocious potentials that could find themselves pitted against Trump on the 2024 ballot. Many of these candidates would likely step back, rather than truly compete with the toxic man who they worship like a king, but were they to run alongside, or even against, Trump, they’d make history as the worst possible presidential candidates.

We want to keep things balanced as we examine the worst potential presidential candidates, but far fewer crazies have teased presidential runs from the left. That certainly doesn’t disclude a few distinctly unpopular candidates from a spot on our list, but it does weigh our ranking heavily in a red direction.

Oh, Hillary. The wife of former president Bill Clinton has a meaty political resume all her own, but following several failed presidential bids most Americans would like the 75-year-old to quietly depart the political field entirely. She has a wealth of experience as a senator, former Secretary of State, and former presidential candidate, but none of that was enough to elect Hillary in 2008 or 2016. The people are clearly not behind Hillary — even when her experience is weighed against the likes of Donald Trump — and it seems best for everyone if she simply takes the L and never runs again.

Joe Sanberg doesn’t have nearly the appalling history under his belt of most entries on this list, but he does have one trait that turns our stomachs these days. An entrepreneur and co-founder of online banking and investing firm Aspiration, Inc., Sanberg feels like a Democratic-leaning repeat of a certain former candidate who promised to run the country “like a business.” Trump already ran the business of America into the ground, so — despite his work helping low-income families and the impoverished — we’d prefer if Sanberg stayed far from the presidential arena.

He was never overly good as a musician, so anyone who thinks Kid Rock would fare any better in politics is fooling themselves. The 51-year-old enjoyed a surprisingly lengthy stint on the music scene, despite decidedly lacking the talent to do so, before plunging into politics with his eyes closed and fingers crossed. In the years since his political views became national talking points, Kid Rock — whose real name would make him President Robert Ritchie, rather than President Rock — has slowly woven his way into the Republican party. He’s not likely to make it far as a presidential candidate — should he ever decide to run — but should that wild hair ever work its way up his ass, we’d be happy to steer him away from any presidential ambitions.

Despite being broadly hated by a large portion of the U.S. population, Ron DeSantis somehow manages to retain his vice grip on the state of Florida. He was recently re-elected to the office of governor in a landslide victory, disappointing millions and prepping the state for another term under the contentious 44-year-old Republican. DeSantis has a number of negative notches in his belt, from his bungling of Florida’s COVID-19 response to his utter lack of concern for the horrific gun violence taking over his state. He’s a popular candidate, in Republican circles, for an eventual presidential run, but most Americans would rather see almost anyone else in the role. His atrocious policies when it comes to immigration and LGBTQIA+ policies already soured much of the nation to DeSantis, but his hubris will likely see Florida’s current governor make a bid for president.

We’re getting down to the real kickers. Kanye West‘s near-unmatched ego has led him to tease a presidential run on several occasions, despite having literally no qualifications for the job. West, who goes by “Ye” these days, was once considered a musical genius, but his behavior over recent years has led all but his most blindly loyal followers to turn from the former star in embarrassment. Add to this his recent stint of antisemitic rants, and Ye quickly secured himself as one of the most unelectable people in the nation. Which could just make him a perfect fit for the Republican ballot.

As one of the most hated men in the nation, it seems impossible to think that Ted Cruz would chance another run for president, but we certainly wouldn’t put it past him. Cruz has been at the forefront of Texas politics for several decades now, much to the detriment of the people of the Lone Star state. He’d rather cut loose in Cancun than assist his people through freezing weather and an energy crisis he helped cause, and his status as an election denier continues to turn the stomachs of many American citizens. Despite his innumerable faults — and one of the worst beards we’ve seen on a human face — Cruz remains an appallingly popular figure in Republican politics, and — while we doubt he’d test his mettle against Trump a second time — another presidential run is all but certainly in his future.

Fox News commentator and all around terrible person Tucker Carlson is another popular Republican contender for president, despite the blatant lies he spreads on a nightly basis via his uniquely toxic program, Tucker Carlson Tonight. Carlson is one of Trump’s earliest boot lickers, an election denier, an opponent to feminism and the COVID-19 vaccines, and an outright racist. He’s sported white supremacist views on his show many a time, despite frequent denials that he is a white supremacist himself. It’s no shock that he doesn’t support the Black Lives Matter movement, but Carlson is also starkly against immigration and the mere idea of climate change. He didn’t even need to run for president to leave an irreversible scar on our nation. It is his voice that led many people to support Trump in the first place, and we can’t help but think that America would be a far healthier, less-divided place if he crawled back to his ivory tower and stayed there.

What is there to be said about Donald Trump that hasn’t already been reported to death? The man is a clear frontrunner for the title of “worst American president,” and he managed to secure that status quite early in his run. Trump’s first run for president was marked by constant controversy, as both his past and current status as a poisonous egotist separated him from his slimy peers. Once he somehow secured the office of president, our least-favorite trumpster fire quickly got to work setting our country back in every way imaginable, and succeeded on a truly depressing number of fronts. His refusal to accept the outcome of the 2020 election led to an insurrection that nearly toppled democracy as we know it, and should he win again, America will almost certainly be placing a dictator at its helm, rather than a president. There’s no one on this list that we think could do quite the damage that Trump can — despite their best efforts — and so Trump retains the number one spot on something other than a list of America’s most corrupt politicians. Congrats, Mr. Trump.