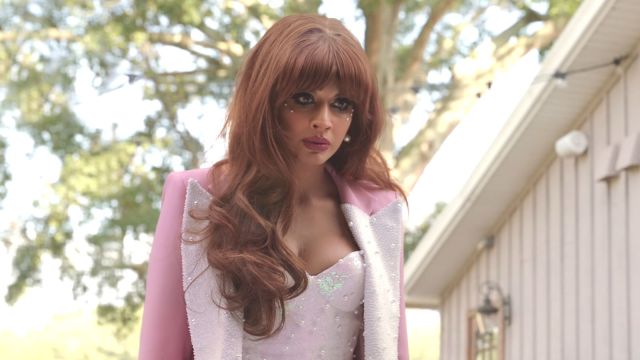 Fresh off the season finale of She-Hulk: Attorney at Law, Jameela Jamil has given the world one of the most eye-catching looks she may ever serve at an awards ceremony.

Attending the Elle Women in Hollywood Awards, Jamil was alongside many of her colleagues in celebrating the achievements of the calendar year, and has given perhaps the most avant-garde look of anyone there. Wearing a dress with two eyes on her chest, it very much looks to be a reference to the age-old “my eyes are up here” comment.

The dress was designed by Christian Siriano, a popular choice in Hollywood dress and particularly eye-catching garments. Jamil’s is on a whole new level of eye-catching and could go down as an iconic look for her. The She-Hulk star attended alongside her partner James Blake and offered up some interesting anecdotes about their relationship.

The couple is surprisingly secretive about their lives together, with even their dog-walking habits almost a CIA secret mission she revealed to People.

“We’re just very strategic about where we go and when we go and we share our dog. We’ve got to make sure that we’re all together with the dog.”

She also shared a very adorable habit she has with Blake – they both wake up at the exact same time.

“It’s morning and coffee and biscuits time, like cookies in America. That is our sacred practice every morning. Even if one of us has to wake up at 4 in the morning — with work, it’s normally me — he’ll get up, even if he went to bed at 1 a.m., to make sure we have that time.”

Jamil could return for a second season of She-Hulk, or even in Daredevil: Born Again like co-star Tatiana Maslany following the first season’s success.