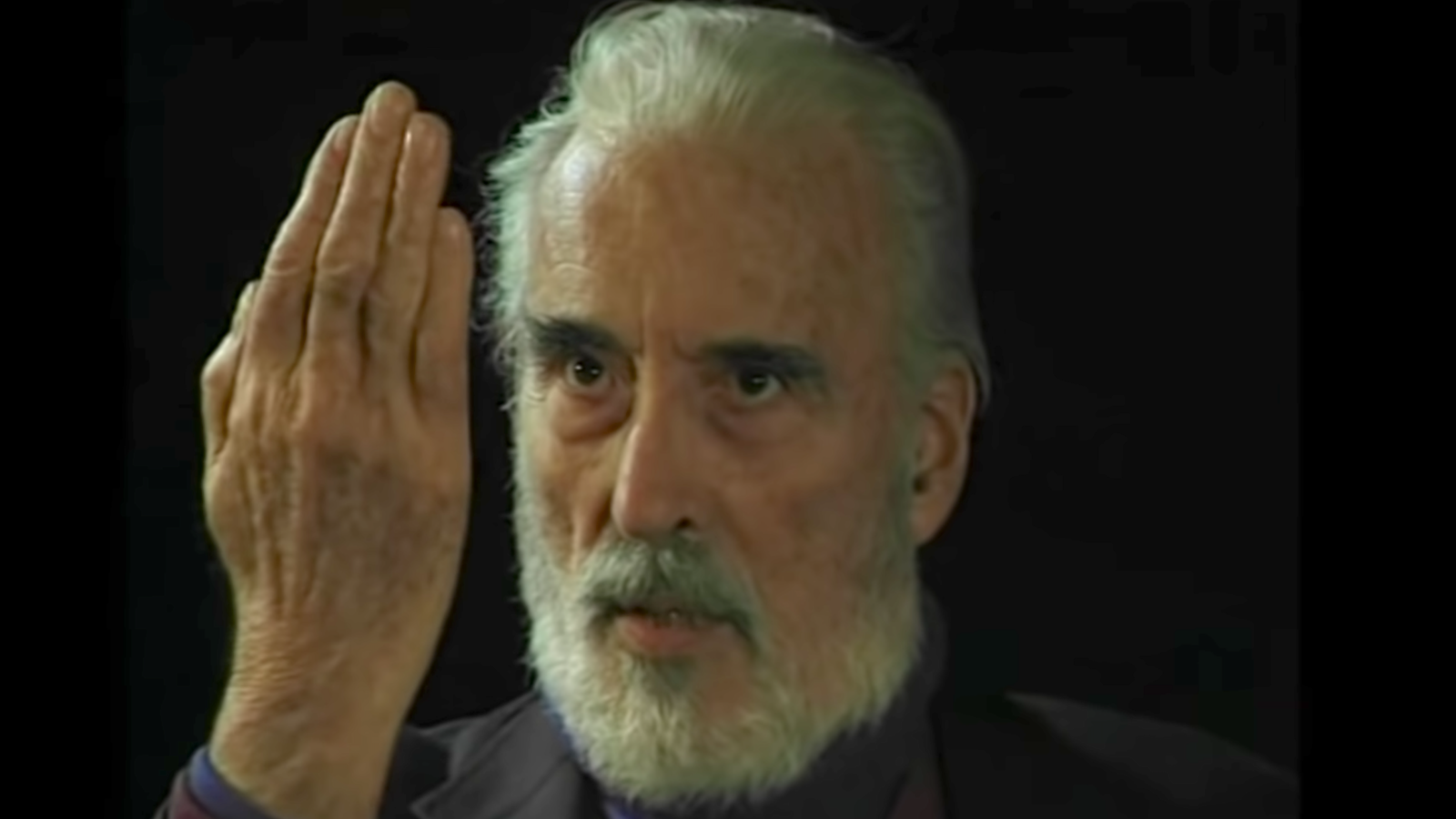 Appearing in Star Wars and Lord of the Rings would be enough to make anybody fairly well-known, but those efforts were only drops in the overflowing bucket of things that made Sir Christopher Lee one of the most interesting men on the planet. In addition to his acting roles, Lee was an author, a fluent speaker of five languages, an actual heavy metal singer, and a bonafide World War II secret agent. Here are some of his greatest roles.

The Lord of the Rings

Okay, we’re going to cheat a little here and bundle all three LOTR (even though he’s mostly only in the first two). Obviously doing these movies was the role of a lifetime for Lee, a fan of the original books since they were first released in the mid 1950s who reread them nearly once yearly up until his passing. His Saruman was impeccable and literally the product of years of research. If you want a chilling bit of extra Lee/LOTR goodness check out below the tale of when he told director Peter Jackson what it’s really like to stab a man in the back. Yikes.

According to Screenrant, the role of Lord Summerisle in the seminal Folk horror film, The Wicker Man, was Lee’s personal favorite. So much so that he agreed to perform it for free even before filming began. He even personally footed the bill for a promotional tour of the film. His love for the role shines in his portrayal of Summerisle, the leader of a pre-Christian pagan sect on his own eponymous island which used Lee’s charisma and menace to full effect.

The Horror of Dracula

While Lee is most recognizable to younger audiences for his work in LOTR and Star Wars, for older generations he was easily the most famous onscreen Dracula since Bela Lugosi, with many still considering him to be the definitive version of The Count. Although Lee donned the vampire’s iconic opera cape a total of ten times to varying degrees of quality, his original outing, in Hammer Films’ 1958 The Horror of Dracula, a reimagining of the original Bram Stoker tale, is easily the best regarded.

The Curse of Frankenstein

Lee is best known for his multiple performances as Count Dracula, but one year prior to his most celebrated Horror film, he helped relaunch not only the genre itself but Hammer Studios with his performance as the Creature in the studio’s first effort, 1957’s The Curse of Frankenstein. The film saw a heavily made-up and truly grotesque version of the creature, who pursues and is in turn pursued by his creator, Baron Victor Frankenstein, played by Peter Cushing.

Moviestvnetwork reported the pair’s first meeting on the film’s set as he burst into Cushing’s dressing room, angry the speechless creature had no lines. “[Peter] looked up, his mouth twitched, and he said drily, ‘You’re lucky. I’ve read the script.’” said Lee. The two would go on to become lifelong friends and colleagues, with Cushing appearing as Dracula’s nemesis Professor Van Helsing several times alongside his friend.

The Man With the Golden Gun

Throughout his career, Lee fought against Yoda, Van Helsing, and Gandalf, so it shouldn’t be any surprise that he once squared off against 007, James Bond himself. As Scaramanga in The Man With the Golden Gun, Lee goes toe-to-toe in a cat-and-mouse shoot out with Roger Moore’s Bond.  The character, an assassin who charges a million dollars a shot, became one of Lee’s most recognized non-horror roles.

Lee held his portrayal of Quaid-e-Azam Muhammad Ali Jinnah, the founder of the modern nation of Pakistan as one of his best and most meaningful roles. In a 2002 press conference, Lee said of the film, “The most important film I made, in terms of its subject and the great responsibility I had as an actor was a film I did about the founder of Pakistan, called Jinnah. It had the best reviews I’ve ever had in my entire career — as a film and as a performance. But ultimately it was never shown at the cinemas.”

The idea of a white English actor playing any South Asian role these days, much less the father of his country, is practically unthinkable now. Indeed, Lee received death threats for the part — but due to his reputation of playing villains rather than his ancestry. Sadly, though the film met with hugely positive reception in Pakistan it has not been distributed in Europe or the U.S. to this day.

Although often consigned to genre roles despite his amazing screen presence, Lee never failed to bring a panache and style to his roles that always elevated whatever project he was working on. One of his higher profile efforts, A Hard Day’s Night and Help! Director Richard Lester’s 1973 live-action adaptation of The Three Musketeers saw Lee breathe life into one of fiction’s best swashbuckling villains, the Comte de Rochefort. Unsurprisingly, Lee was a skilled swordsman in real life, on par with screen legends such as Basil Rathbone and Tyrone Power, and was able to show off accordingly in the picture.

The Devil Rides Out

This 1968 adaptation of the Dennis Wheatley 1934 Horror novel of Satanic cabals and the occult is one of Lee’s best performances and is criminally unknown outside of horror fandom. Lee plays the Duke de Richleau, an exiled French nobleman who uncovers a Satanic cult while investigating the strange actions of the son of a friend.

The film’s dead serious approach to its source material makes it a standout among Hammer Films’ often unintentionally campy monster films and it’s widely regarded as one of the best movies the studio ever made, largely due to the power of Lee’s steely performance of Richleau.