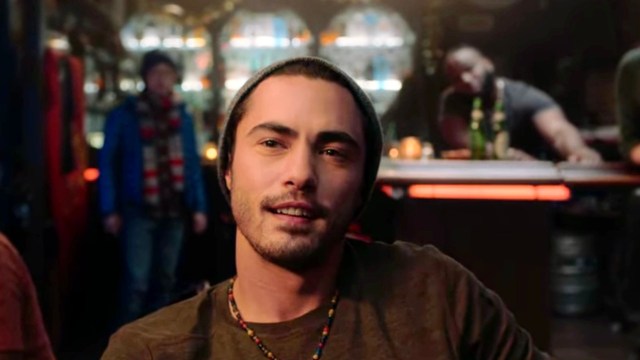 Best known for playing Paxton Hall-Yoshida in the Netflix series Never Have I Ever, Darren Charles Barnet is a fast-rising American actor who was born in Los Angeles. The 31-year-old made his acting debut just five years ago, but he’s managed to make a name for himself already in a relatively short period of time. Barnet always wanted to be an actor, even from a very young age. While he always had huge aspirations of acting, he didn’t give it a real go until he enrolled in Berry college in Northwestern Georgia where graduated with a Bachelor of Arts in 2013.

In Berry College, Barnet acted in plays and short films which grew his interest for acting even more. After college, he moved back to Los Angeles to fully pursue his acting dreams. He landed his first role in 2017 when he starred in the award winning family drama This Is Us and then later in S.W.A.T. and Criminal Minds. The following year, he starred as Hot Seth in the Brat-produced, Facebook Watch limited streaming television series Turnt. He also appeared in a supporting role in the Lifetime original television movie Instakiller, which marked his film debut. Since then Barnet has landed more notable roles and continues to be a regular on screen. Here are the best Darren Barnet series and movies ranked, from least to best.

Untitled Horror Movie is an American horror comedy film directed by Nick Simon. The film follows six actors —  Claire Holt, Darren Barnet, Emmy Raver-Lampman, Katherine McNamara, Timothy Granaderos, and Luke Baines — who decide to create a horror film, and in doing so mistakenly summon a malicious ghost. Barnet plays Max, a fun-loving character in the ensemble cast. Untitled Horror Movie was filmed remotely due to the COVID-19 pandemic and the actors had to be responsible for lighting, makeup, audio, and camerawork.

Barnet starred in American police procedural series Criminal Minds in 2017. The show follows a group of criminal profilers who work for the FBI as members of its Behavioral Analysis Unit, using behavioral analysis and profiling to investigate crimes and find perpetrators. Barnet appeared in the twelfth season of the show as Zack Bower, a bit part character which he did justice to.

Barnet made his acting debut in American family drama television series This Is Us. The show stars an ensemble cast featuring Milo Ventimiglia, Mandy Moore, Sterling K. Brown, Chrissy Metz, Justin Hartley, Susan Kelechi Watson, Chris Sullivan, Ron Cephas Jones, Jon Huertas, and several others. It follows the lives and families of two parents and their three children in several different time frames. Barnet appears in the eleventh episode of the first season and he plays the younger version of Jack, the patriarch of the Pearson family and a pivotal character in the show.

One of Barnet’s earlier roles was in Family Reunion, an American sitcom created by Meg DeLoatch. He featured in Remember The First Day of School?, the seventh episode of this sitcom that follows a family of six who move from Seattle, Washington, to Columbus, Georgia, for the McKellan Family Reunion and decide to stay to be closer to their family. Apart from Barnet, Family Reunion features a host of other actors like Tia Cowry, Anthony Alabi, Talia Jackson, Jordyn Raya James, Cameron J. Wright, Isaiah Russell-Bailey, and others.

Instakiller is a thriller that features stars like Kelly Sullivan, Shawn Christian, and Lizze Broadway. The film tells the story of a woman whose teenage daughter becomes Internet-famous, a development that leads her to worried about the amount of attention her daughter is receiving. Her fears prove justified when she realizes someone is stalking her daughter. Barnet plays Joey, the psychotic stalker who stalks his coworker Harper. Instakiller was his film debut and it remains one of his most challenging and more interesting roles till date.

Samurai Rabbit: The Usagi Chronicles is a CGI-animated action-comedy streaming television series based loosely on Japanese-American cartoonist Stan Sakai’s Usagi Yojimbo comic books. The series takes place in the far future and centers on rabbit teenager Yuichi, who is the descendant of Miyamoto Usagi, and his group of eccentric companions. Barnet displays his range and versatility in Samurai Rabbit: The Usagi Chronicles, as he voices two different characters Yuichi and Spot. The action comedy features other names like Shelby Rabara, Mallory Low, Eric Bauza, Aleks Le, Keone Young, Yuki Matsuzaki, and SungWon Cho.

Darren Barnet only appears in two episodes of Agents of S.H.I.E.L.D. and he does an excellent job. The ABC show stars Clark Gregg, Ming-Na Wen, Brett Dalton, Chloe Bennet, Iain De Caestecker, Nick Blood, Adrianne Palicki, Henry Simmons, and more. The series is based on the Marvel Comics organization S.H.I.E.L.D. (Strategic Homeland Intervention, Enforcement, and Logistics Division), a peacekeeping and spy agency in a world of superheroes. Barnet plays Wilfred “Freddy” Malick, a member of HYDRA, and father of Gideon Malick, a leader of HYDRA and a member of the World Security Council.

Love Hard is a 2021 American romantic comedy film directed by Hernán Jiménez. It stars Nina Dobrev, Jimmy O. Yang, and Darren Barnet. They play Natalie Bauer, Josh Lin, and Tag Abbot, respectively, three characters who found themselves in a love triangle. Natalie Bauer, a Los Angeles-based dating column writer connects with Josh Lin on a dating app, but finds out much later she’s been catfished. Josh had pretended to be someone else, Tag Abottt, his childhood friend. Barnett expertly brings life to the Tag character, playing his part in a heart-tugging movie that’ll keep you wondering till the very end.

1. Never Have I Ever

Barnet plays Paxton Hall-Yoshida, undoubtedly his most famous role till date, in the  American romance comedy-drama series Never Have I Ever. It was created by Mindy Kaling and Lang Fisher for Netflix and it stars other names like Maitreyi Ramakrishnan, Poorna Jagannathan, Richa Moorjani, and Jaren Lewison. Never Have I Ever centers on Devi Vishwakumar, an Indian-American high school student dealing with the sudden death of her father. Barnet plays Devi’s crush, a 16-year-old high school junior who later becomes her love interest.