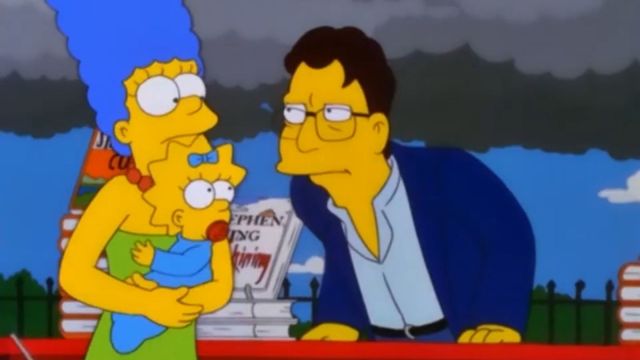 The Simpsons is set to embark upon parodying a book Stephen King himself has almost completely disowned for the next “Treehouse of Horror”.

“Treehouse of Horror” has become a fixture of The Simpsons since its second season, with the latest season set to see it continue the tradition with entry number 33. While little is known thus far on what the three segments will include, we’ve been given our biggest hint thanks to a prelude episode.

As “Treehouse of Horror: Not It” ends, Kang and Kodos go through a library and decide upon none other than King’s failed foray into science fiction with The Tommyknockers. King himself has rejected the book for many years, with him describing it as an “awful book” and a product of his most debilitating years of substance abuse.

The Tommyknockers, like most King novels, is set in a New England town that finds itself at the center of an alien brainwashing attempt thanks to a mysterious object found deep in the woods. It’s notable for being a rare science fiction book from King, with it far from his forte.

Adapting King’s work for “Treehouse of Horror” is a tried-and-tested tradition, but it’s rare for The Simpsons to parody a lesser-known work from the King of Horror. There had been a miniseries adaptation in 1993, but failed to gain much traction as King himself described it as “kind of cheap and thrown together”.

James Wan of The Conjuring was earmarked to adapt the book in 2018 as a producer, but little has been heard since.

“Treehouse of Horror XXXIII” is set to air Oct. 30.