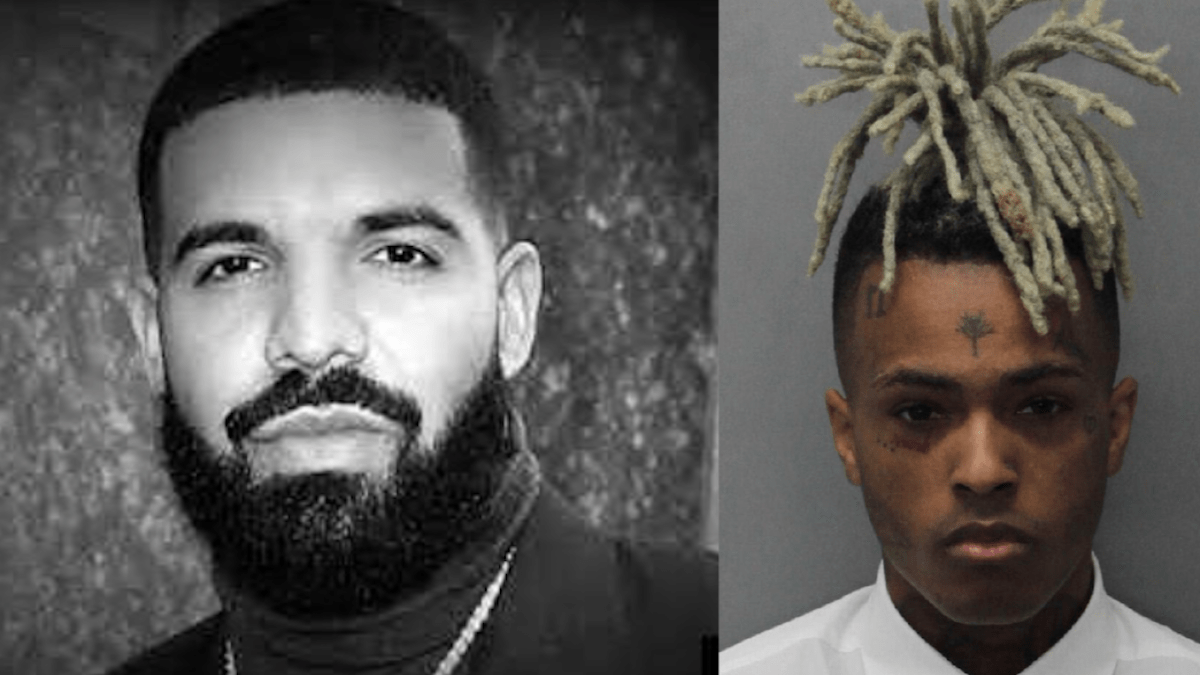 It’s been four and a half years since rapper XXXTentacion — born Jahseh Onfroy — was murdered. Now, one of the suspects, Dedrick Williams, will be on trial this month for his alleged role in the murder. His lawyers recently filed a motion for Drake to testify, fueling continuous speculation that Drake may have been involved in Onfroy’s death.

Does such speculation carry any substance? We’ll break down why people believe it does and let you decide for yourself.

Prior to Triple X’s arrival on the Billboard charts in 2017, 30-year old Drake was already an established superstar in hip hop. X was just a teenager but had survived a childhood filled with trauma which helped mold him into a teenager with a troubling mentality and, as a result, Onfroy was in countless fights in school and soon had legal problems.

After he spent a year in a youth detention center, he started to take his music seriously in 2016 only to end up stabbing his manager, Tablez, in a misunderstanding. Tablez dropped the charges, of which Onfroy was grateful, but the soon-to-be famous rapper immediately returned to making poor decisions as he was part of a home invasion for which he was eventually sentenced to six years probation, but not before being charged with an unrelated crime of domestic assault and false imprisonment of his then-girlfriend who later pushed to get the charges dropped.

While in jail, X claims that he was told that Drake was impressed when he heard his music and that the Canadian rapper had reached out to a mutual acquaintance to tell him that he would contact his manager soon, suggesting a collaboration or at least a major connection in the business that significantly help X’s career. Drake ended up not reaching out and, instead, released a track called “KMT.” X’s fans immediately called out Drake for stealing X’s style from the up-and-coming rapper’s song “Look At Me,” which was extremely popular on SoundCloud.

In reaction, X took to Twitter to insult Drake and pointed out that many already know that Drake’s biggest hit “Hot Line Bling,” was a ripoff of “Cha Cha,” by DRAM. Onfroy also disrespectfully added that Drake’s mom was cute and “could get it.”

Shortly after X got out of jail, he gave an interview with 103.5 The Beat where he discussed his troubles, his desire to be a better person, and his music. He was also asked about his issues with Drake. “I think he’s not a man. If he would’ve showed that he was really into this sh** for the culture rather than being a fu** ni*** taking my sh** and running off with it, putting it on his album, then he would’ve gotten my respect.”

In an interview with DJ Semtex, Drake was asked about the similarities between his and X’s song. Drake claimed that he saw what people were saying so he had to check out who X was, which directly opposes X’s claims that Drake heard his song before, though others back up X’s claims that Drake had tried to reach out to the rapper. Drake said, “I see where people draw this comparison off of the first two lines, whether it be the cadence or the rap pattern or whatever.” He later added, “To go and think that I’m gonna take that and make it my own – I’m not stupid. I’m not a sh** person.”

Drake claiming he’s not the type of person to steal someone else’s song is almost comical to true hip hop fans. Just ask Soulja Boy, or Big Sean, or Too Short, or even Rappin’ 4-Tay – whom Drake’s record label ultimately agreed to pay $100,000 to for “borrowing” his lyrics.

X responded, emphasizing that Drake is lying about not knowing who he was and that it basically proves that he needed to lie to cover for stealing his song. He had posted videos on Instagram Live discussing the matter, where he had previously dissed Drake and some of his friends.

“Drake tried to sacrifice me,” X said during an interview with DJ Akademiks. “I saw him as a business opportunity the same way he saw me as a business opportunity.” He then used the time to apologize for speaking disrespectfully about his mother, adding that was a statement that went too far. However, he reiterated that Drake was guilty of “exploiting the cadence” from his song.

In January of 2018, Onfroy announced that he wanted to start a movement called the Helping Hands challenge and said he was donating numerous gifts to a foster home. He encouraged others to do kind things. Drake then journeyed to X’s hometown of Miami and donated over a million dollars to help those in need. Many saw this as a troll move by Drake who, unlike X, capitalized on the movement by making a song and video called “God’s Plan.” Drake then encouraged his followers to do kind things.

X responded positively, however, and surprisingly had kind words for Drake when discussing it.

Then — in February 2018 — XXXTentacion posted on Instagram a short statement where he tagged Drake, whose IG handle is @champagnepapi. X’s message read, “IF ANYONE TRIES TO KILL ME IT WAS @champagnepapi.”

The post, accusing Drake of preparing to murder him, was eventually deleted and X excused it by claiming that his Instagram was hacked.

Drake soon released a song called “I’m Upset,” where he raps,“SMS, triple x, that’s the only time I shoot below the neck/Why you keep on shooting if you know that ni*** dead/That’s the only kind of sh** that gets you some respect.”

Mentioning “triple x,” which is XXXTentacion’s nickname, made people believe that Drake was confirming X’s IG post. This line became even more of a reference later on since X died by being shot in and below the neck.

At the time, the 20-year old Miami rapper’s popularity was soaring rapidly and he released his album ? on March 12, 2018. It debuted at No. 1 on the Billboard Album Charts. XXXTentacion had arrived, but tragedy soon followed.

In the late afternoon of June 18, 2018, Onfroy withdrew $50,000 in cash and put it in a Louis Vutton bag. He visited a motorsports shop in Deerfield Beach, Florida but he had been followed there and apparently left without making a purchase. When driving away, another vehicle sped up to block his, then two men quickly exited the vehicle and robbed Onfroy at gunpoint, taking his Louis Vutton bag filled with cash. As they returned to their vehicle, one of them turned around and shot Onfroy six times. He was taken to the hospital but was pronounced dead at 5:39pm.

In the coming several weeks, four men were arrested for his murder but, despite no apparent ties to Drake, the speculation that the Canadian rapper had something to do with it only grew. A week after Onfroy’s death, Drake released his fifth album, Scorpion. In one of the songs, “Mob Ties,” Drake lives up to its title and raps about having ties to the mob and that he can get anyone knocked off. He also raps, “It’s too late for all the lovey-dovey sh**.” This made some listeners believe he was referring to X’s kind words after Drake’s visit to Miami. Drake also raps, “GLE ‘cause that Lamborghini movin’ fast/S Class, G Class, lotta class/In a rocket and that bit** ain’t got no tags/Louis bags in exchange for body bags.”

Considering X’s Louis Vutton bag filled with cash was what was stolen during the murder, it appears that Drake was referring to Onfroy in a body bag. Was he? If so, is it just a tasteless line or an admission/prediction?

It’s now years later and the rumors still persist but Drake didn’t do himself any favors in calming speculation recently when he and rapper 21 Savage released the song “On BS” in November 2022. In it, Drake raps,”Maybe I should do a 20, maybe I should break a 20 do a 10, maybe I should break a 10 do a 5 then if it gets live do a 5 again.” A lot of fans believe that line is a reference to XXXTentacion, considering that XXX in Roman numerals equates to 30 and the mathematical gymnastics Drake is playing some claim also equates to 30. That could be a stretch but it’s the very next line that really fuels this and it seemingly references X’s talk about Drake and his friends on IG Live. Drake raps, “If he held his tongue on that Live he’d be alive again.”

This theory gained further popularity when Drake was named as a potential witness this past week by Dedrick Williams’ lawyer in the trial of Onfroy’s murder but it’s doubtful that Drake will actually be forced to testify in the matter.

However, there is no real evidence against Drake. Yes, one can claim he is lying about not knowing who XXXTentacion was or even claim that he was being petty during the ordeal but that doesn’t mean he murdered Onfroy. Then again, Drake doesn’t seem completely innocent of rapping about it, at least if you believe he is indeed referring to Onfroy in his lyrics. DJ Akademiks has also claimed that Drake once told him that he felt XXXTentacion was his only real competition. Some fans even go so far as to say that Drake would consider doing anything to eliminate his competition.

However, the murder clearly appears to be part of an opportunistic robbery where four men followed Onfroy after he withdrew $50,000 cash.

No matter what you believe in this tragic story, most can probably agree that Drake bragging on record that he has mob ties is not exactly the smartest move.