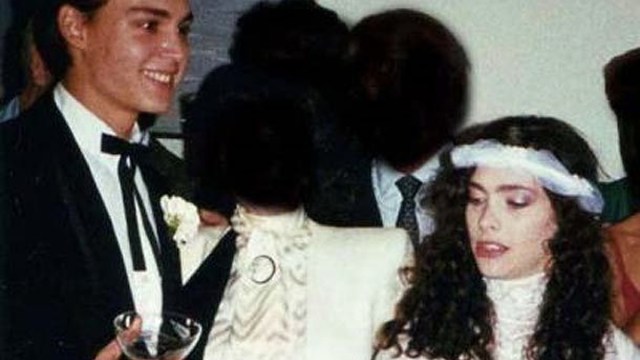 While the whole world was glued to the Johnny Depp and Amber Heard defamation trial, they might not have known that before marrying and divorcing Heard the Pirates of the Caribbean star was married to Lori Anne Allison during the early days of his career.

Depp and Allison married in 1983 when he was just a 20-year-old aspiring actor and she was 25 years old. They had a beautiful love story that was cut short in 1985 when the couple parted ways on grounds of irreconcilable differences.

Allison met Depp through the band called The Kids that he started and Allison’s brother played bass in. After they married the couple moved to L.A, where Allison plan on pursuing a career in the music industry unfortunately could not be fulfilled after she lost the hearing in her left ear. She moved on to work in the film industry as a professional make-up artist and became friends with well-known names like Christina Applegate and Adam Ant, to name a few.

Shortly after Depp made his mark in the film industry when he starred in the cult hit horror movie A Nightmare on Elm Street. The pair divorced afterwards as Depp’s career skyrocketed with hit TV show 21 Jump Street.

Attention has turned back on Allison after Depp’s failed marraige with Heard shone a light on his previous relationshipshas. On that note, let’s take a look at how Depp’s former wife has fared years after their separation and what she is doing now.

She is a successful makeup artist now

Allison has achieved her share of success and recognition in the industry as a well-known makeup artist, working with renowned celebrities such as Cloris Leachman and Josh Groban. Allison also worked as a makeup artist on films like Matters of Consequence, Recalculating, and Rule of Three. She is also known as a social media influencer, producer, and businesswoman.

Allison’s interest in makeup started when she was eight years old when she used a pen to draw makeup on her dolls, and cut their hair. At age 13, Allison used to regularly visit the makeup boutique at Collins Avenue when she received training in skin enhancement and exaggeration.

In 2015, Allison started her own line of lip gloss called Serendeppity, with many glosses are named after her favorite celebrities and idols such as Marilyn Monroe, Olivia-Newton John, and Laila Ali. Speaking of her prolonged journey as a makeup artist as well as working with A-List celebrities with ENSTARZ, Allison said:

“I’ve been working for 30 years and 90 percent of my experiences have been with celebrities and the one experience that probably made me the most nervous and it just stands out the most in my mind is when I worked with Sting I think in the late eighties.”

She went on to add:

“It was for an MTV Rockumentary and he was very sunburned. It was in Florida and I happened to be there on vacation. The producer was a friend of mine so I was called to see if I’d do Sting’s makeup. I remember the call. “Can you do makeup on him? He has a really bad sunburn!” I went to the nearest beauty supply store in practically hurricane weather and picked up some makeup.”

She lives a lavish life and is active on social media

Allison’s successful professional career has earned her approximately $2.5 million in addition to the $7 million that she received as a divorce settlement from Depp.

Besides being a professional makeup artist, Allison is also known for authoring books. She authored a book under the name of Suzanne Allison on celebrities and their dogs called Gimme Shelter, as well as contributed to a book of short stories called For Sale: Baby Shoes, Never Worn.

In addition to professional engagements, Allison is an avid dog lover. She is also active on social media and has over 1000 followers on Instagram which goes by the name @serendeppity where she posts pictures of herself along with her close friends and dogs.

She defended Depp in the trial

Despite the 30-year old long divorce, Allison came out in support of her former husband in 2016, the same year when Depp divorced Heard. During the divorce proceedings, Heard brought allegations of domestic violence to the forefront that was criticized by Allison.

Heard, who was married to Depp for 15 months stated that she suffered multiple domestic abuses that were the results of Depp’s drug-fuelled rage.  No specific evidence of domestic violence, however, could be found. Allison spoke on the subject and stated with certainty that the allegations were not true as Depp would never lay hands on a woman.

Allison narrated her own experience of being married to Depp, saying that he is a “soft person” who would never even hurt a fly. . She claims to have maintained a close relationship with Depp and they talk to each other from time to time.

It seems like the former spouse of the Hollywood superstar has maintained quite a positive reputation for herself. Allison surely has a successful career and is still going strong.