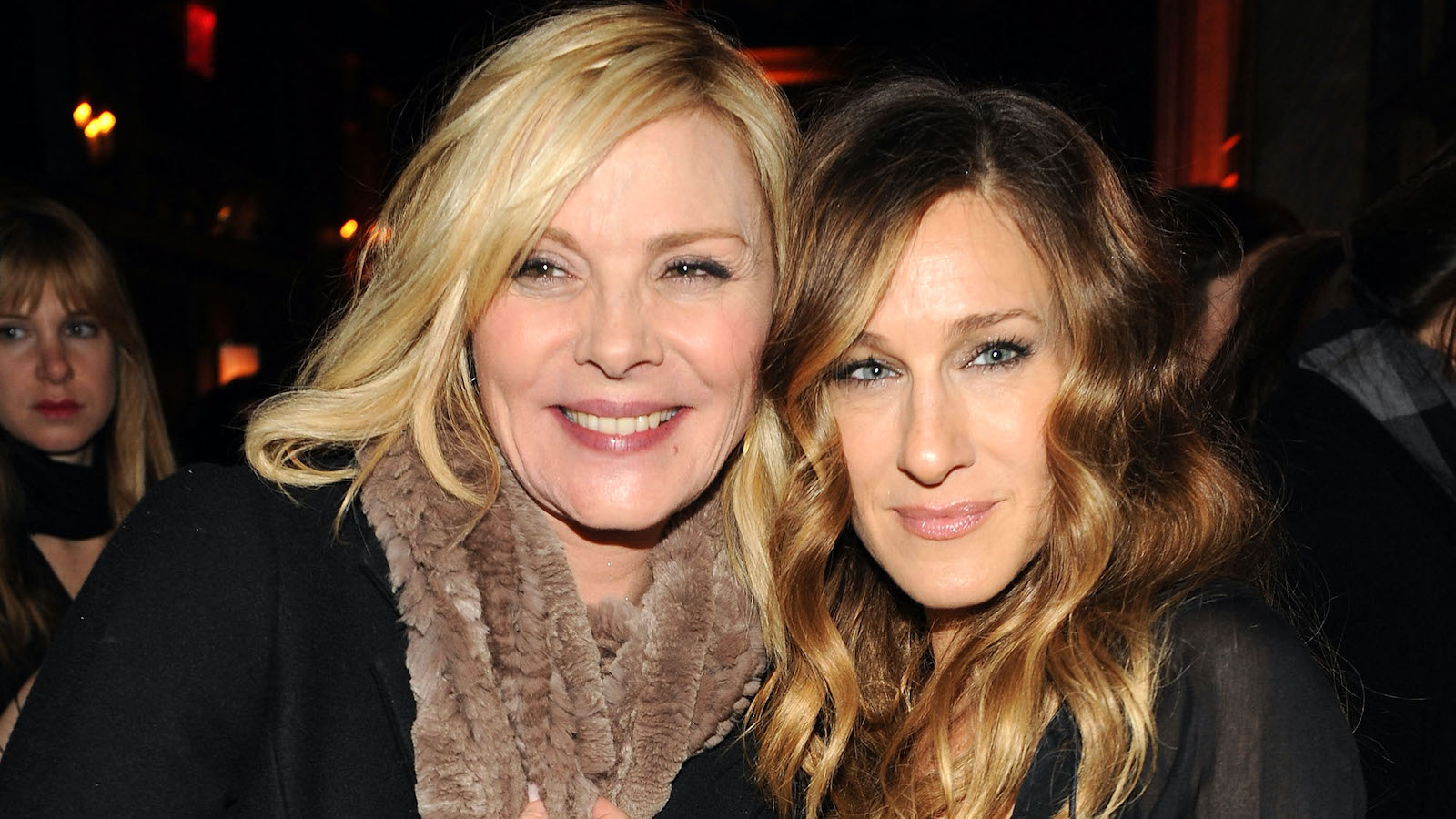 In 2020, Kim Cattrall made it very clear that she wanted to finally retire the conversation about her so-called feud with Sex and the City co-star Sarah Jessica Parker. She told the Los Angeles Times that she doesn’t “have any regrets” for how things have played out over the years (and boy have they played out), encouraging people “to Google it,” “it” being the so-called feud.

Depending on which year you Google, you’ll either find evidence of a feud, or no evidence at all, as the two actresses have gone back and forth for years playing nice, one year saying they’re cordial, the next lashing out over social media. But all that changed recently when Parker took to The Hollywood Reporter’s Awards Chatter Podcast last Thursday to shed some fresh light on the matter. Given the attention Parker’s interview has garnered, it’s clear that she inadvertently itched a healing scab and opened up an old wound.

How did the feud begin?

The feud-that’s-not-a-feud supposedly began back in 2017 when the third movie installment of Sex and the City hit a bump in the road too large to drive over. The feud had apparently been living under the surface for years, but at that point it took on a whole new form. Reports from Daily Mail claimed that the third Sex and the City movie was cancelled because Cattrall demanded more money for her role as Samantha and that Warner Bros. must green-light her other projects as part of her deal.

Parker took to Extra to not only publicly announce that there would be no Sex and the City 3, but also proclaim her disappointment with the cancellation, and thus with Cattrall’s so-called hand in the matter. From afar, it was clear that her proverbial fingers were pointing at Cattrall. As she said in a statement, “I’m disappointed. We had this beautiful, funny, heartbreaking, joyful, very relatable script.”

Unfortunately, much of the blame for the movie’s demise landed on Cattrall’s shoulders, which she didn’t take kindly to, tweeting “Woke 2 a @MailOnline [poop emoji] storm! The only DEMAND I ever made was that I didn’t want to do a 3rd film….& that was back in 2016.”

Cattrall subsequently booked an interview with British talk show host Piers Morgan, where she clarified that, “The answer was always no. I never asked for any money, I never asked for any projects. To be thought of as some kind of diva is ridiculous.” But that’s not all ⏤ she also admitted that she’s never truly gotten along with Parker or her fellow Sex and the City co-stars.

The whole ordeal was publically detailed in a New York Post piece that has since become infamous for confirming the feud-we-all-knew-was-a-feud and the “mean girls” culture that contributed to it. Things only got more heated when Parker took to Watch What Happens Live with Andy Cohen to admit how “heartbroken” she was by Cattrall’s words.

“I found it very upsetting because that’s not the way I recall our experience. So, it’s sad, but… I always think what ties us together is this singular experience. It was a professional experience, but it became personal because it was years and years of our lives. So I’m hoping that sort of eclipse anything that’s been recently spoken.”

However, nothing could prepare people for the all-out war that erupted between the co-stars as a result of the passing of Cattrall’s brother the following year in 2018. When she learned of the news, Parker told Extra, “I can’t begin to know how her family is managing such a loss. We all send her our love and condolences and grant her the privacy that she’s asked for.” As she told ET, “If somebody in your life, whether you’re in touch with them or not, [is] suffering for any reason, it’s involuntary that you want to convey condolences or sadness or just let someone know you’re thinking about them.”

Cattrall did not take kindly to Parker’s words of condolences, saying in an Instagram post, “@sarahjessicaparker… your continuous reaching out is a painful reminder of how cruel you really were then and now. Let me make this VERY clear. (If I haven’t already) You are not my family. You are not my friend. So I’m writing to tell you one last time to stop exploiting our tragedy in order to restore your ‘nice girl’ persona.”

So why are people talking about the feud now?

A lot has happened since then, including Cattrall’s 2020 Los Angeles Times piece wishing to retire the conversation about her and Parker’s feud, not to mention the revival of Sex and the City‘s HBO show, And Just Like That, which Cattrall is not a part of.

Just when it seemed like the dust was settling between the former co-stars, Parker injected new life to the famous feud-that’s-not-a-feud by opening up to Scott Feinberg on The Hollywood Reporter‘s Awards Chatter Podcast. “It’s very hard to talk about the situation with Kim,” she said, hoping to clarify the matter.

The podcast began with Parker confirming that her and Cattrall’s falling out was heavily tied to the demise of the 2017 Sex and the City 3 movie.

“There were things that she requested that they were not able to do. They didn’t feel comfortable meeting where she wanted to meet, and so we didn’t do the movie because we didn’t want to do it without Kim, and the studio wasn’t going to do it, so it fell apart. It wasn’t that she said ‘no’ to the movie; it’s that the studio said ‘no’ to the movie, which, you know, happens. And every actor has a right to ask for things, to have, you know, a contract that feels good to them… Were we disappointed? Sure. But it happens.”

The underlying message from Parker’s interview seems to be that she found it “very painful” to know that Cattrall’s experience on Sex and the City did not match her or her co-stars’ experiences.

“I’ve spent a lot of years working really hard to always be decent to everybody on the set, to take care of people, to be responsible to and for people, both my employers and the people that I feel I’m responsible for as a producer of the show. And there just isn’t anyone else who’s ever talked about me this way.”

When it comes to the making of And Just Like That, Parker cleared the air on Cattrall’s lack of appearance.

“We did not ask her to be part of this [And Just Like That] because she made it clear that that wasn’t something she wanted to pursue, and it no longer felt comfortable for us, and so it didn’t occur to us. That’s not ‘slamming’ her, it’s just learning. You’ve got to listen to somebody, and if they’re publicly talking about something and it doesn’t suggest it’s someplace they want to be, or a person they want to play, or an environment in which they want to be, you get to an age where you’re like, ‘Well, we hear that.’”

Before ending the discussion, Parker took a moment to emphasize once and for all that her beef with Cattrall has never been a “catfight” or even a “fight” at all.

“It’s so painful for people to keep talking about this ‘catfight’ — a ‘fight,’ a ‘fight,’ a ‘fight.’ I’ve never uttered fighting words in my life about anybody that I’ve worked with — ever. There is not a ‘fight’ going on. There has been no public dispute or spat or conversations or allegations made by me or anybody on my behalf. I wouldn’t do it. That is not the way I would have it. So I just wish that they would stop calling this a ‘catfight’ or an ‘argument,’ because it doesn’t reflect [reality]. There has been one person talking.”

Now, Parker’s Hocus Pocus 2 co-star Kathy Najimy has come out in support of Cattrall. Just one day after The Hollywood Reporter piece went public, Najimy tweeted “@KimCattrall Sending you alll the love and support in the WORLD today!! one of the best, most authentic humans in the ‘business’ and maybe the world! dinner soooon my love!”

Parker may claim that there has been only one person talking, but in Hollywood, discourse doesn’t necessarily need to happen face-to-face or even directly to one another at all. When you’re a celebrity, it’s just as easy to communicate via the press, and thus ignite a conversation. After these many years and this much distance from the issue, it seems very clear that, contrary to Parker’s beliefs, two people have been very much alive in this conversation.