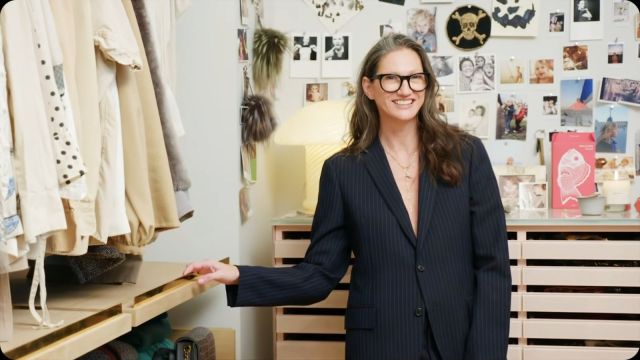 When Bravo’s favorite roster of cast members met in New York for BracoCon, the annual celebration of every single franchise from Bravo, drama naturally arose in celebration of the gossipmonger network. In spite of all the hot goss at the event, the truly shocking events unfolded during the taping of Watch What Happens Live was being aired, shocking everyone at the party: the new Real Housewife of New York City is none other than…Jenna Lyons.

Foreign to some, Lyon’s name is actually a staple in the world of high-end fashion in the United States. If you’re one of the people not familiar with Lyon’s legacy, and in light of the fourteenth season of The Real Housewives of New York City, here is everything you need to know about “the woman who dresses America.”

Who is Jenna Lyons?

Born on June 8, 1968, in Boston, Massachusetts, Jenna Lyons is an American fashion designer and business entrepreneur, and personality. Lyons moved to California at 4 years old, where she was heavily bullied for her health concerns. The designer suffered from incontinentia pigmenti, a genetic disorder that scars the skin and caused her hair to fall out in patches. It also malformed her teeth, forcing her to wear dentures.

Due to her childhood experiences and genetic condition, Lyons admitted to becoming quite introverted, finding refuge in fashion and experimenting with clothes. In 2020 Lyons pursued the entertainment world when she had her own reality show on HBO Max, called Stylish, which followed Lyons and her team of designers as they faced challenges and took on new projects.

As for the designer’s personal life, she was married to artist Vincent Mazeau, with whom she shares a son, though their nine-year relationship came to an end in 2011. In 2012, Lyons announced her relationship with Courtney Crangi, with whom she dated until 2017. As of 2022, there is no information regarding the designer’s personal romantic affairs, but if everything works out, The Real Housewives of New York will provide more than enough information on the mysterious entrepreneur.

As per an article by The New York Times, Lyons received the title of the woman who dresses America by completely changing the perception of women’s fashion through her 26-year tenure at J.Crew, where she started off as a junior designer fresh out of college. As time went on, Lyons rose to the presidency and as executive creative director at J.Crew. During the late 2000s and 2010s, Lyons was responsible for shaping and changing the wardrobes of millions of women across the United States.

Lyons went against the aesthetic that the brand had been known for throughout the 90s, opting for bright and experimental designs as opposed to the classic, East Coast look previously exhausted by the brand. The designer often opted for robust, and chunky accessories, paired with button-down shirts. Animal-print outwear was styled with cashmere knits, bringing contrasting styles, patterns, and fabrics to co-habit in an entirely experimental and loud design. Lyons became known for being a designer that made officewear fun and bold as well as casual gear that was exciting yet elegant.

Loved by many as the designer to dress A-list celebrities like Michelle Obama and Beyoncé, Lyons would eventually announce her departure from J.Crew in 2017.

The 14th season of The Real Housewives of New York is expected to premiere in 2023. Lyons will be joining the cast alongside Jessel Taank, Ubah Hassan, Lizzy Savetsky, Sai De Silva, and Erin Dana Lichy.