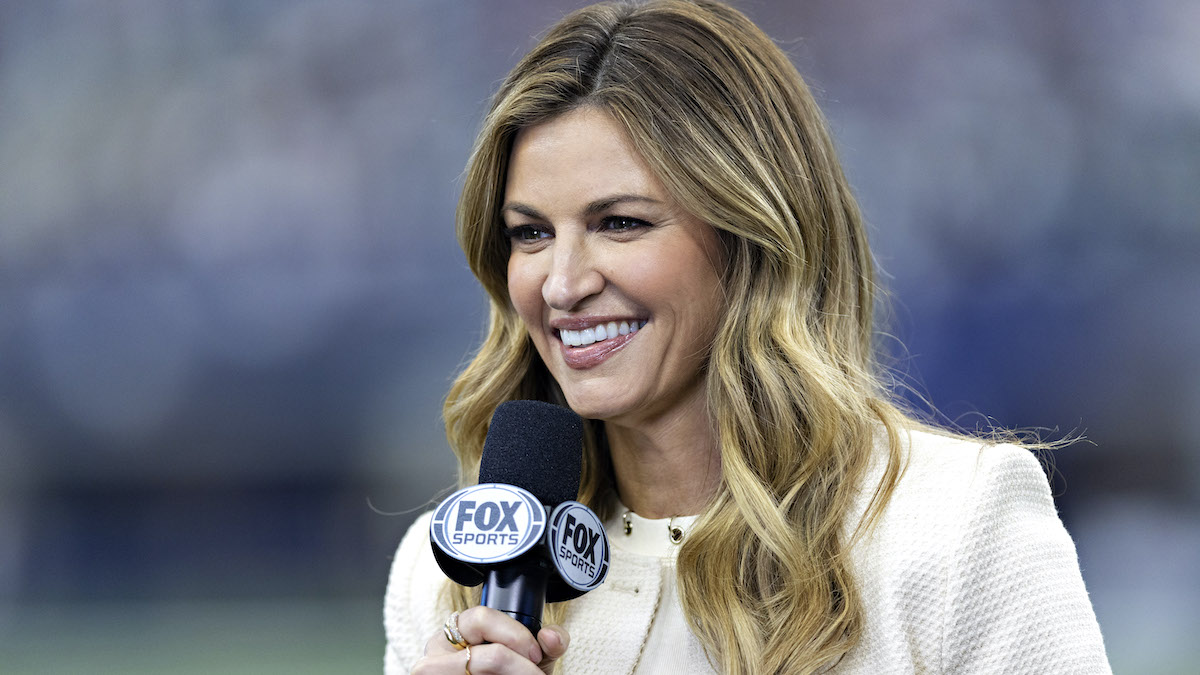 Erin Andrews first broke into the reporting scene when she joined Fox Sports Florida as a freelance reporter in the early 2000s. Now, the 44-year-old is the lead NFL sideline reporter for Fox News. While her career has taken several twists and turns, branching out at times to include non-sports-related endeavors, she is regarded as one of the most respected sportscasters in the industry.

Her role in the sports world has increased in size and scope throughout her 20-plus year career; she’s been named the first female recipient of the Pat Summerall Award, has been awarded the Vince Lombardi’s Award of Excellence, and has covered “three Super Bowls (Super Bowl XLVIII, Super Bowl LI, Super Bowl LIV), 10 NFC Championships, and the 2014 and 2015 World Series/MLB All-Star Games,” according to her Fox Sports bio.

While some people remember her as a contestant on season 10 of Dancing with the Stars as well as a co-host on the reality competition, most know her from Fox Sports. However, before then, she enjoyed a flourishing career as an ESPN reporter for eight years until 2012. It was there that she crossed paths with her future husband and former NHL player while reporting at the 2012 World Series.

Jarret Stoll is best known as the former professional hockey player for the Edmonton Oilers, Los Angeles Kings, Minnesota Wild, and New York Rangers. He was born and raised in Saskatchewan, Canada, began his professional hockey career with the Canadian Edmonton Oilers in 2002, and went on to win two Stanley Cups with the L.A. Kings in 2012 and 2014.

Now retired from the NHL as a player, Stoll continues to remain a notable figure in hockey world through his work as an analyst for the L.A. Kings and with Player Development for the organization. “I love both (roles),” he told the NHL in 2017. “Just preparing for the telecast, everything is so different with different teams coming in with different lineups, there’s just a different storyline for every game. I love getting ready for that… It’s awesome to still work for the team that you played for and that you loved playing for; that gave you an opportunity to win a Stanley Cup.”

Back when he was still putting in the hours with the L.A. Kings, Stoll found himself in a love story taken straight from the page of Hollywood’s playbook. After asking his friend to introduce him to Andrews, he was turned down due to the fact that Andrews was busy reporting on the World Series. Determined to see his effort through, Stoll showed up in San Francisco to introduce himself in person. The way he tells it, Stoll bent over a dugout railing – bypassing security in the process – and asked Andrews out on a date, where she, impressed with his gumption, agreed, according to Bazaar.

Four years later in 2016, they were engaged and later tied the knot in Big Sky, Montana on none other than Stoll’s 35th birthday in 2017. According to Andrews, the wedding was all Stoll’s doing. “You know my man is the bridezilla!” she playfully said in an interview with Extra. “He is Pinteresting. I’m in Dallas Cowboy meetings, and he’s sending me, ‘Hey babe, I saw this on Pinterest,’ and I’m like, ‘Hey babe, will you let me get through Super Bowl?’ “

In Jan. 2022, Stoll made headlines after Andrews outed him as a diehard fan of NFL player Tom Brady. She herself remains a neutral commentator, but as she explained on her podcast, Calm Down, Stoll scared her half to death one day when he began screaming at the TV. Thinking something was the matter, she quickly asked what was wrong, only to discover it was just Stoll’s love for Tom Brady coming through.

“I’m like ‘what’s wrong?’” Andrews said, relaying the story to her co-host Charissa Thompson. “And he goes ‘Tom! They got Tom walking on the field! He looks great!”

Stoll and Andrews currently parent an adorable golden retriever named Howie together. They are coming up on their six-year anniversary on June 24, 2023.