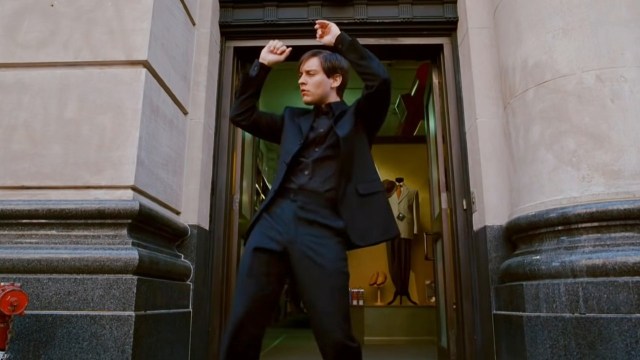 Between Twitter, Reddit, and YouTube, even the worst movies are being viewed through a nostalgic filter. Film and television series that were once considered among the worst of the worst is now embraced as quality escapist cinema. Likewise, those campy performances that were lambasted in the day are now viewed as ironically great.

In the spirit of embracing the unintentional comedy of a campy performance, this list is all about those performances that are so corny, cliché, and over-the-top that it has a certain charm to it.

Remember, this isn’t simply about bad acting in bad movies, although the camp tends to be found in the worst films. These are the roles that, for as cringey as they may be, a new generation of fans have given them gold stickers for hilarity. With that in mind, we salute these cringey-yet-charming performances from superhero cinema from Adam West to Nicolas Cage and all points in between.

The problem with 2004’s The Punisher wasn’t necessarily its lead actors. Thomas Jane did his corniest Rambo impression, and John Travolta ran with the camp as far as it would take him. The biggest sin in The Punisher was watering down a bloody, R-rated character like Frank Castle in an attempt to make a more accessible story. It never works. Still, Jane has his fans who want to see him make an entrance as Castle somewhere in the Multiverse.

Until recently, 2005’s Fantastic Four was a movie most audiences wanted to forget. Ever since rumors began to swirl that Chris Evans and the rest of the cast could appear as Multiversal variants in the MCU’s Fantastic Four movie, the old Fantastic Four suddenly had fans.

The Tim Story directed Fantastic Four is so cringey that practically everyone from the cast could have made the list. It is Jessica Alba as Sue Storm aka The Invisible Woman that stands out. Her line deliveries are wooden at best and make a high school drama class look like Shakespeare.

Ant-Man is a legitimately funny movie, but that doesn’t make it a fantastic one. The age-defying Paul Rudd plays his standard lovable, oblivious man-child self as small time criminal turned superhero Scott Lang aka Ant-Man, yet watching Rudd in a sci-fi costume that gives him powers is rather campy on its own.

Add in the cliché villain wanting to weaponize godlike technology for profits and the all-too-predictable happy ending, and the Peyton Reed directed Ant-Man is a cringe-worthy watch, but one that at least delivered laughs. The 2018 sequel Ant-Man and the Wasp dumbed down the script even further while adding a thick, gooey layer of cheese. Campy or not, fans adore Rudd, and his work as Ant-Man has made him a megastar.

The very 1970s theme song truly sets the stage for camp classic TV series Wonder Woman. As awful as the funky disco beat may be, fans of the show cherish the song, and it remains iconic to the Wonder Woman character after 47 years. The same can be said for the show’s star, Lynda Carter.

Wonder Woman was primarily aimed at kids, mostly little girls (although I’m sure plenty of adults tuned in for Carter’s outfit), but it is ‘70s camp at its finest. A testament to Carter’s enduring popularity is her cameo in the Wonder Woman 1984 post-credits scene. Of course, the entire film was more or less a love letter to the ‘70s television show.

Widely considered as one of the worst superhero movies of all time, fans of campy fun have begun to embrace Joel Schumacher’s Batman & Robin.

Batman & Robin is deplorable, and it would take years to wash the stink off the Caped Crusader. Critics gave it a 12 percent Rotten rating, while audiences saddled it with a putrid 16 percent. Modern fans, however, have been showering the film with praise more frequently, which truly questions modern tastes in cinema. The love is specifically directed towards Uma Thurman’s Poison Ivy. Channeling her inner Lauren Bacall, Thurman hammed up every line, especially when she was in full Poison Ivy mode. In a movie with Arnold Schwarzenegger as Mister Freeze and his nonstop ice puns, Thurman managed to claim the title of campiest actor, something that shouldn’t have been possible.

After Spider-Man 2, one of the best superhero movies ever made, there were high hopes for Spider-Man 3. So what went wrong? The first half of Spider-Man 3 was decent, but then came the Venom alien symbiote, a plot element that was painfully shoehorned into the story. After that, things got weird.

Tobey Maguire did his best/worst Saturday Night Live impression in an awkward strut before breaking out the sexy disco moves in his new black suit. Even more baffling is the jazz club dance scene. Somehow, the symbiote gave Peter the power of a jazz pianist. The obvious wire tricks make his jumps and flips all the more stupid.

Moviegoers were puzzled. Did the film make a 180-degree turn into slapstick comedy or did director Sam Raimi and company actually think they were making art? Spider-Man 3 has long been the unforgivable sin placed on everyone involved with the filmmakers’ horrible decisions, which includes Kevin Feige, who produced the movie. Thanks to the age of memes, fans look at “Bully Maguire” as pure comedy gold, intentional or otherwise.

With few exceptions, when a studio hires Jim Carrey for a role, they’re going to get the campiest, hammiest performance this side of Nic Cage. Goofball, campy characters are Carrey’s specialty, and he has made millions upon millions of dollars mastering the craft. When director Joel Schumacher and the Warner Bros. team tapped “the living cartoon” to be their Riddler in Batman Forever, they knew exactly what they were getting. No question, Carrey delivered the goods, putting in overtime for his take on Edward Nygma aka The Riddler.

Michael Keaton explained that when Tim Burton left Gotham City after Batman Returns, the actor met with Schumacher about Batman Forever. Keaton was taken aback at how determined Schumacher was to make Batman more lighthearted and silly. Keaton chose to leave the role to Val Kilmer.

There’s no denying the layers of cheese smothering Batman Forever. Tommy Lee Jones as Two-Face would have made this list if it was based strictly on cringe-worthy caricatures, but these are the campy portrayals that have somehow become good in the eyes of social media. While Carrey’s zany, 1966 Batman-inspired shenanigans are viewed through rose-colored glasses, the same can’t be said for Jones.

When it comes to playing the corniest of superheroes, there’s no denying the undisputed King of Camp is Adam West as Batman, who completely embraced the silliness like no other.

For his part, the 1966 Batman television series was meant to be the most over-the-top version of the character ever created. That was a taller feat than you may realize, considering the general weirdness of 1950s and ‘60s DC Comics. Thanks to the moral panic of the 1950s, the Comics Code Authority was created to stamp out any potential threats to children’s minds, specifically comic books. The CCA’s overbearing censorship turned all superhero comics into their most diluted, awkward versions geared exclusively toward small children. Batman ‘66 was patterned after that era, and it has made for some of the campiest performances in all superhero cinema.

These days, West’s ridiculous Batman is by no means good, but there is an undeniable charm. Fans of escapism so love the ‘66 Caped Crusader that DC has published comics and produced an animated movie set in the show’s universe.

There is one man who has made an art out of campy ridiculousness, at that man is Nicolas Cage.

This wasn’t always the case. In the ‘90s and into the 2000s, Cage was viewed as a legitimate actor after an unlikely Oscar win for Leaving Las Vegas. He also had become a bona fide everyman-type of action hero. Tim Burton was on board to direct Cage as the Man of Steel for a canceled Superman film. When audiences began to tire of his antics, Cage’s career was downgraded from summer blockbusters to direct-to-video releases.

Around this time, social media began a steady stream of Nicolas Cage memes and clips of his most outrageous moments. Just like that, the world had fallen in love with the actor once again. What fans adore most are Cage’s worst movies. They don’t get any worse than his two Ghost Rider films. If you are a fan of meta humor, you’ll appreciate every moment of the GR franchise.