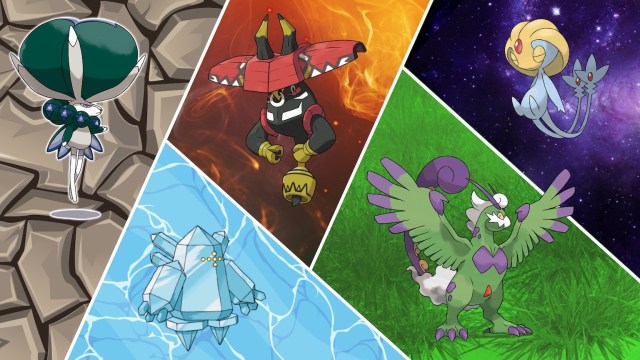 Legendary Pokémon are a group of Pokémon that are considered rarer and more powerful than regular Pokémon. As they cannot hatch from eggs, they are restricted to spawning in the wild or being met in scripted encounters. Due to the low catch rate, some are very difficult to obtain. And while they may be considered formidable, they can’t all be gems. Indeed, some legendary Pokémon are outclassed by other legendaries or even regular Pokémon. So whether they’re weak, hard to catch, or just downright basic, here are the 10 worst legendary Pokémon.

This equine-like Pokémon has one thing on its mind – food, and it’ll do whatever it can to get some. It possibly draws inspiration from the Four Horsemen of the Apocalypse and may represent the White Horse of Conquest. It’s an ice-type with a belligerent personality that takes what it wants by force.

It’s considered very weak and slow, meaning you’re likely to take a lot of damage when using it, even with good bulk and recovery. In addition, it’s inferior defensively.

This Pokémon is a member of the Aura Trio alongside Xerneas and Yveltal. It plays the role of monitoring the ecosystem.

However, despite being a good samaritan that cares about the environment, it’s a major disappointment. With horrendous base stats, it has trouble countering fairy and ice-type moves, and its weakness hinders its tanking capabilities. You might as well use the 50% Zygarde because it pretty much does the same thing as the 10% Zygarde.

Mesprit is a grayish fairy-like Pokémon. It’s a roaming Pokémon that players can encounter throughout the game. Although genderless, it has a feminine appearance and seems to be based on one of the Three Sacred Treasures of Japan, one of which represents benevolence.

Despite its “benevolence”, however, it is a difficult specimen to catch, often annoying players with its evasive skills. You might need to use a Master Ball to capture a Mesprit.

A psychic-type Pokémon, Uxie is part of the Lake Guardians, along with Mesprit. Its eyes are naturally closed because it is said to wipe the memories of all those who gaze into them. Like Mesprit, Uxie seems to be based on the Three Sacred Treasures of Japan, representing honesty and wisdom.

Although its psychic powers are acceptable, it gets a lot of flak for being “boring” or “basic”. Like Mesprit, it is difficult to catch, and with so many other psychic Pokémon to choose from, Uxie gets knocked down the totem pole.

Regirock is a rock-type and one of the Legendary Titans. It appears to be a silent but angry Pokémon, and when injured, it repairs itself with nearby rocks, hence its appearance. It’s based on a golem, a creature from Judeo-Christian legend that is empowered by writing on its head.

Its low-speed stat and weakness leave it easily defeated by offensive Pokémon. It’s severely outclassed by many other Pokémon, such as Golem, another rock-type.

Tapu Bulu’s inspiration is that of a bull, as it has a nose ring and can close its shell to resemble a bull’s head. Additionally, it may be based on Lono, a god of agriculture. It is also a very lazy Pokémon that rings its bell-like tail to signal its location. It has the ability to control and grow plants.

It’s considered the worst Tapu in its group of four. Trainers are not fans of its fairy/grass-type due to the many weaknesses it presents. Additionally, its main same-type attack bonus move is grass, which can be inferior to other offensive types such as water, electric, and psychic.

A flying-type Pokémon, Tornadus is a member of the Forces of Nature along with Thundurus, Landorus, and Enamorus. With white hair resembling a cloud, it has two forms – Incarnate, in which it is somewhat humanoid, and Therian, in which it becomes bird-like. It’s based on Fūjin, a god of wind in Japan, and resembles a genie, like the other Forces of Nature.

Despite its speed, Tornadus has very little defensive ability due to its Stealth Rock weakness, poor defenses, lack of resistance, and inability to recover quickly.

This ice-type Pokémon is bipedal and light blue. Its body remains at a freezing temperature of -328 degrees Fahrenheit, cooling the air around it. Regice can control this frigid air and uses it to freeze its surroundings. Like Regirock, it appears to be based on a golem.

Regice lacks recovery and has poor defensive typing, making it vulnerable to many hazards. And while it may have decent stats, it has none of the tools needed to excel, such as speed and a good special attack.

Phione is a water-type mythical Pokémon that is only obtained by breeding Manaphy or another Phione with a Ditto. It has a flotation sac on its head which it uses to drift beneath the surface of water when searching for food. It is for this reason that it’s called the “Sea Drifter Pokémon.”

It’s comparatively weak, both to legendaries and other water-types, its stats are mediocre, and it lacks a special signature move. Phione has been accused of being a worse version of Manaphy, another water-type mythical Pokémon.

Calyrex is a psychic/grass-type Pokémon that is the mascot of Crown Tundra, a snowy realm in the Galar region. It has two fusion forms – Ice Rider and Shadow Rider, replacing the grass-type with ice or dark-types, respectively. Previously, Calyrex ruled all of Galar in ancient times, and it is said to be intelligent and ruthless in battle. However, it will still heal a foe’s wounds when presented with the option.

Offensively, Calyrex is wanting. Its attacking stats are mediocre at best, and its attacking movepool is pitiful. It also struggles defensively. Its inability to give out damage or pose a scary enough setup threat means that if an enemy were to keep blasting away, Calyrex would fall. It may be considered an “okay” Pokémon, but it’s not as good as others, so why choose it when there are better options?