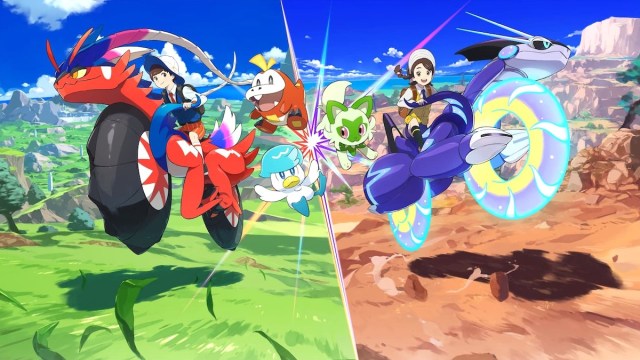 It is almost time for the next entries in the Pokémon franchise as Pokémon Scarlet and Pokémon Violet are set to release on Nov. 18, 2022, on the Nintendo Switch. These two games will serve as the beginning of the ninth generation of Pokémon games, as we close the book on the eighth generation that started with Pokémon Sword and Pokémon Shield. Of course, these will not even be the only Pokémon games that were released this year with Pokémon Legends: Arceus releasing at the beginning of 2022.

These two games will be the first pair of games to release since last year’s Pokémon Brilliant Diamond and Pokémon Shining Pearl and as is the case with all of the dual releases, there will be some obvious differences between Pokémon Scarlet and Pokémon Violet, as well as some subtle ones. So let us take a look at all the ways the two games will be different. It is important to note that none of this information was taken from the leaks, only from the pre-release material like trailers and gameplay showcases.

How are Pokémon Scarlet and Pokémon Violet different?

First of all — and perhaps most obviously — the names of the games are different, as well as their color schemes, with Pokémon Scarlet’s box art being red (scarlet) and Pokémon Violet’s being purple (violet). Your character will also look different depending on which version of the game you play, as they take on the color scheme of the game that you play – although previous Pokémon games have allowed you to change your outfit so what color uniform you start with probably will not matter in the grand scheme of the game.

But you do attend different academies in each game, attending the Naranja Academy in Pokémon Scarlet and the Uva Academy in Pokémon Violet. Each one bears a different emblem that represents the academies and therefore you will wear different emblems on your uniforms depending on which game you play. If you attend the Naranja Academy you will be wearing an emblem with an orange on it, with an orange-colored crest on the academy itself. Whereas if you attend the Uva Academy you will be wearing an emblem with grapes on it with a purple-colored crest on the Uva Academy.

The two games also have exclusive characters, and it is unknown whether their counterparts will be in the game as rivals, as that might make sense. The two characters that have been announced to be different before the game’s release are the two professors Professor Sada and Professor Turo. Professor Sada is a woman who gives off a cavewoman vibe and she will be your professor in Pokémon Scarlet. Professor Turo on the other hand is a man who looks like he stepped out of a time machine from the future, and he will be your professor in Pokémon Violet. There might also be exclusive characters between the versions who have not yet been announced.

The box mascot Legendary Pokémon are also different with Pokémon Scarlet’s Legendary Pokémon being Koraidon and Pokémon Violet’s being Miraidon – although the pair are remarkably similar, as were some of the other box mascots over the years. They are both reptilian, and they will both be used to venture the region of Paldea as they can shift forms in the game, allowing you to ride them on land, in the water, and through the skies.

There are also other Pokémon that will only be available in one version of the game and not the other. For Pokémon Scarlet, the exclusive Pokémon will be Larvitar, Pupitat, Tyranitar, and Stonjourner as well as a new Pokémon called Armarouge, which looks like a knight on fire. For Pokémon Violet, the exclusive Pokémon will be Bagon, Shellgon, Salamence, Eiscue, and another new Pokémon called Ceruledge which looks like Armarouge’s counterpart, a knight with swords consumed by darkness. In addition to these Pokémon, there will also seemingly be two forms of Donphan exclusive to each game, with Great Tusk exclusive to Pokémon Scarlet and Iron Treads exclusive to Pokémon Violet. They seem to share the past and future themes of the professors and you can catch a glimpse of them in the trailer above.

Of course, if you do want to collect all of the Pokémon you will need access to both games, whether that means buying a copy of the other game yourself or trading with a friend. However, one question that is still unanswered regarding both games is just how many pokemon will be in the Pokédex for the games. It was controversial for Pokémon Sword and Pokémon Shield not to include every pokemon available throughout the franchise so far, and there have only been over 200 pokemon seen in all the pre-release material of the new games. This also means that we will not know just how many Pokémon will be exclusive to Pokémon Scarlet and how many Pokémon will be exclusive to Pokémon Violet until the release of the games. So unless you have pre-ordered them, it might be worth waiting to decide on whether you want to buy both games based on the information which releases once the games come out. Nintendo has made it easy for you to pick up both games if that is your decision, as there is a double pack of the games available to purchase from retailers if you choose.

These are all the differences between the two versions of the game that we are aware of before their release. So you can either experience all the differences between the games yourself by buying both Pokémon Scarlet and Pokémon Violet, or you can acquire the Pokémon that you might miss out on by buying only one version, by trading with a friend. Or you could just have fun with one version of the game as the open world will undoubtedly prove to be a fun and enjoyable experience for any Pokémon fan. Whichever way you choose to play the games, check out Pokémon Scarlet and Pokémon Violet when they release on Nov. 18, 2022, on the Nintendo Switch.