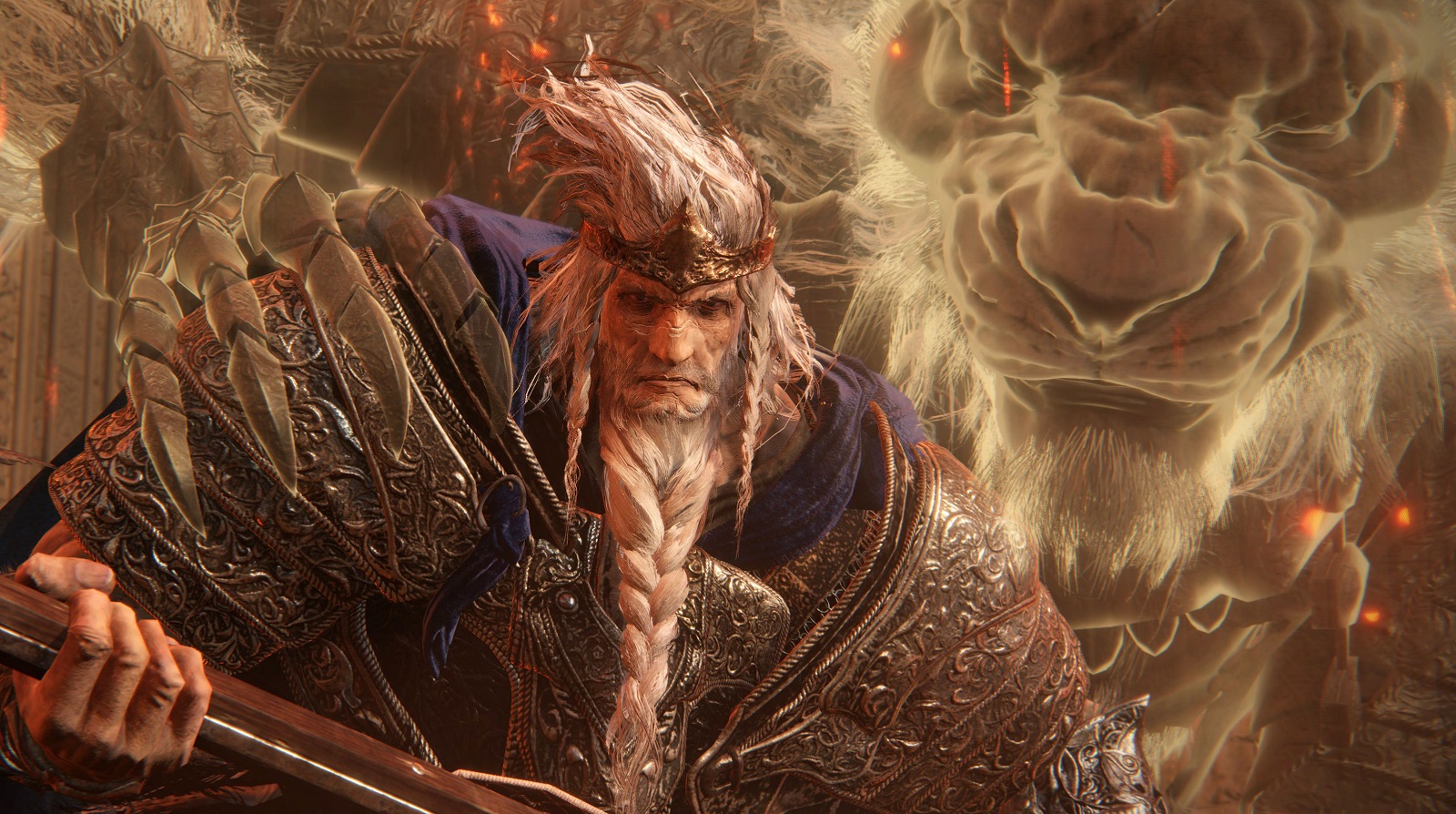 Most of the bosses you encounter in Elden Ring take a kind of twisted pleasure in taunting you, a lowly Tarnished, who wants to achieve greatness and become Elden Lord. Ironically enough, the only person not to do that is Godfrey himself, who is the First Elden Lord, but don’t let this respectful demeanor trick you into thinking that Queen Marika’s consort is easily subdued.

When it comes to Hidetaka Miyazaki lore, the devil is hardly ever in the details. The inclusion of George R.R. Martin (the creator of Game of Thrones) as a story consultant and worldbuilder hasn’t really amended the issue, which is why most of the characters you meet in the Lands Between are simply an enigma, and Godfrey, one of the most important in this ensemble, is no exception to this rule.

Thanks to item descriptions and the ardent fanbase putting two and two together, however, we now have some semblance of an idea as to who Godfrey was, and perhaps most importantly of all, why he carried a seemingly live lion on his back.

Godfrey started out as the fighter Hourah Loux, a warlord taken by insatiable bloodlust. When he met Marika — the god queen of the Lands Between — he became her consort, taking his place as the First Elden Lord and guardian of the Erdtree, a sentinel to the royalty’s most treasured gifts. That’s when he also took on the moniker of Godfrey, and took control of Marika’s armies as a commanding general.

Marika and Godfrey had three children: Godwyn the Golden, Morgott the Omen King, and Mohg the Lord of Blood. When the Giants threatened the Erdtree with the Flame of Ruin, Marika’s court waged war against them, and Godfrey commanded the queen’s armies. After defeating his last enemy, however, Godfrey felt like his purpose in life was diminishing, because his was to fight until the last breath. Consequently, Marika exiled him from the Lands Between, effectively making Godfrey the first Tarnished warrior. She also prophesied that there may come a time for him and his warriors to return and reclaim their old titles.

That brings us to the Night of Black Knives, when Godwyn, heir to Marika, was killed. In her inconsolable grief and rage, Marika shattered the Elden Ring, driving the Lands Between into a period of chaos and turmoil, allowing Godfrey to return and protect his queen and the Erdtree once more.

When the Tarnished protagonist burns the Erdtree and makes his way to Leyndell, Fallen Capital, he finds Godfrey protecting the path to Marika/Radagon, and the two engage in a fight to the death.

Why did Godfrey kill his lion Serosh?

Godfrey might give you the respect that is owed a Tarnished who can beat more than a hundred bosses — demigods and legendary warriors all — to arrive at the foot of the Erdtree, but when it comes to actually fighting you, the First Elden Lord isn’t going to pull any punches. Godfrey fights aggressively and relentlessly, with a stamina bar that doesn’t seem to ever give in to exhaustion.

He will come at you with a variety of combos, each following the next in succession without missing a beat, making it difficult to land blows. But if you manage to evade his attacks and use your brief openings to build up Hemorrhage, you will eventually grind away his health bar and initiate the second phase of the fight, where an angered Godfrey kills his the Lion Regent Serosh and turns into Hoarah Loux, fighting you as the bloodthirsty warrior he once was.

Based on how the scene plays out, you might think that Hoarah Loux killed his companion out of rage, but the true reasoning makes him even more of a badass. Apparently, when Godfrey first approached Queen Marika, his bloodthirst was so unquenchable that he had to take the spectral lion Serosh on his back to suppress that unremitting lust for fighting and killing. That’s why the second phase of the boss fight is even more aggressive than the first, because the player is essentially fighting against a Godfrey gone berserk.

Even when defeated and at death’s doorstep, though, Hoarah Loux remains honorable to his last breath. “Brave Tarnished,” he says. “Thy strength befits a crown.” That is perhaps the truest testament to the idea that the only character in all of Elden Ring capable of understanding what the player is going through — and perhaps even expressing solidarity with him — is Godfrey, who, according to the lore, also defeated foes and adversaries innumerable to take his place as Elden Lord beside Queen Marika.