Gran Turismo 7 is a "real-driving simulation" revelation, taking full advantage of the PlayStation 5's power and the DualSense controller to create one of the best racing games ever. 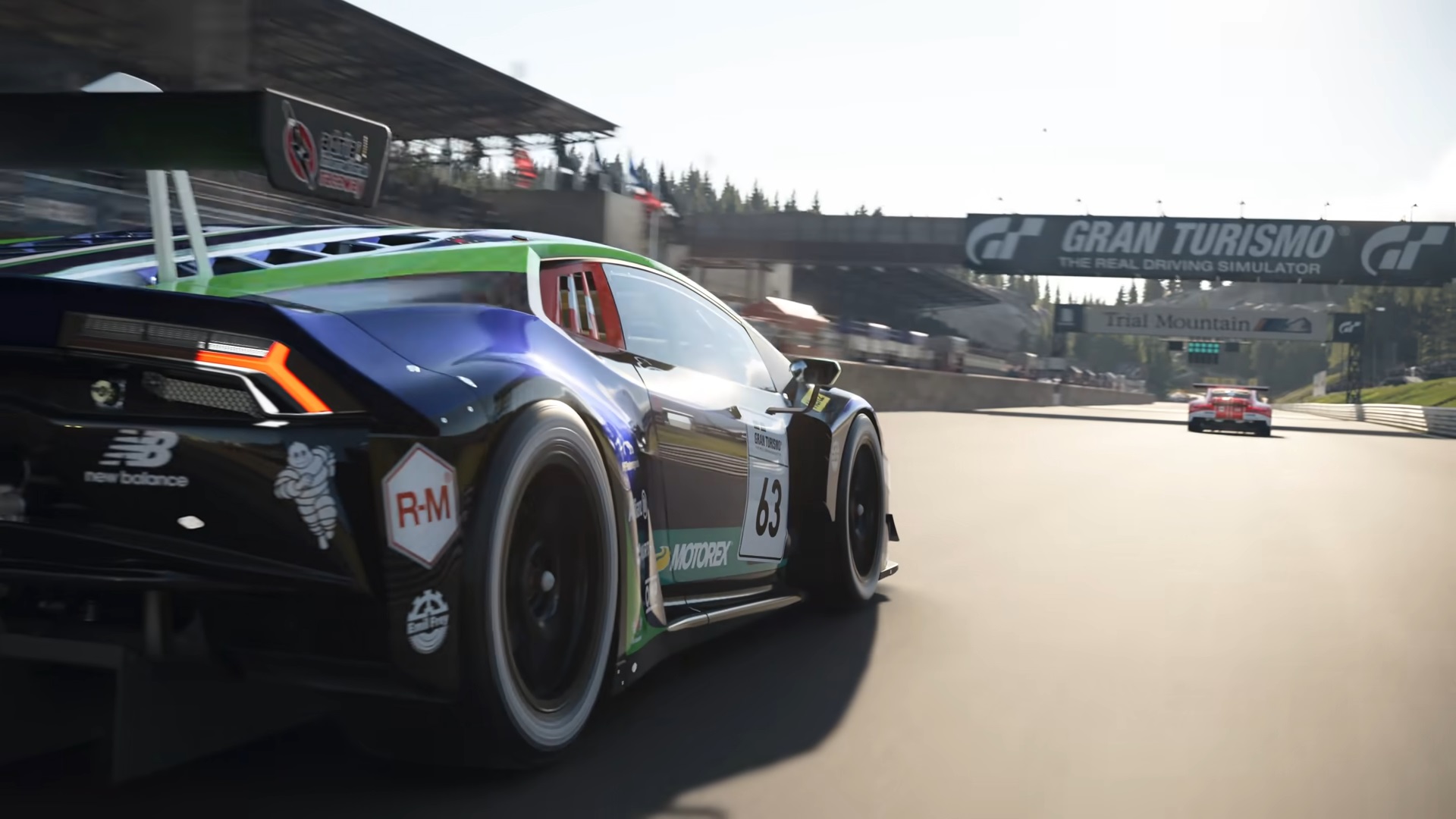 My relationship with the Gran Turismo franchise has been complicated, at best. It began 25 years ago on the original PlayStation when I picked up the game hoping for a fun racing experience like F-Zero and Mario Kart — two games I was very good at. As you may have guessed, I was left disappointed, as Gran Turismo is not as much a racing game as it is a driving simulation — the developers even use that as a tagline. I’ve dabbled in the series here and there over the two-and-a-half decades since, but when the opportunity to check out Gran Turismo 7 for review came across my desk, I decided to give it another shot. And boy, am I glad I did.

It turns out that 25 years ago, I just wasn’t ready for a game like Gran Turismo. I wanted thrilling, arcade-like racing, and this isn’t that. But now, after years of playing through the Forza series, I can finally appreciate exactly what a “driving simulation” game is, and comparing apples to apples, Gran Turismo 7 is a driving simulation without peer. It trades silly customization options for real-world car applications and pushes the physics of driving in ways I’ve never seen before.

The game has over 420 licensed cars to collect — including everything from economical “grocery getters” to high-powered sports racers, and nearly 1,000 parts to choose from to tweak your fleet of vehicles as you progress through Gran Turismo 7‘s ‘tutorial mode’ mode, which incorporates a “cafe” and “menu book” system. All of this leads up to the more robust world of online driving with friends and strangers on over 90 track variations, including real-world locations like Nurburgring and Le Mans, and even the streets of Tokyo. The amount of content here is staggering, and even for a series novice like myself, I was quickly sucked into this world, finding plenty to enjoy as my GT career finally clicked into high gear, 25 years late.

As mentioned, Gran Turismo 7 offers players new and old a new system to ease into the racing world with the Gran Turismo Cafe. There, players are given various ‘menu books’ of things to do, like earning specific licenses, tweaking a certain car, or collecting a grouping of cars based on their commonalities, like front-wheel-drive cars, or hot hatchbacks. It’s a fun way to dive into the game and offers insight into the greater details of the car enthusiast subculture while creating a fun “mission-based” gameplay opportunities.

The cafe is but one of Gran Turismo 7‘s many options. Music Rally is a fun introductory mode that tasks drivers with completing a song while driving. Instead of seconds, the time is measured in musical beats, and clean and careful driving ensures that you get to the end of the song and earn rewards. But this is just the tip of the iceberg when it comes to gameplay options, as there are licensing tracks, special event races, championships, and a robust multiplayer suite.

In addition to game modes, Gran Turismo 7 is stacked with things to do with your cars, from taking professional-quality photographs in various locations with Scapes, or changing nearly every aspect of a car to suit your style or ready a vehicle for a race with the GT Auto or Tuning Shop, leaning into the game’s incredible physics systems.

Gran Turismo 7 trades arcade-like racing and stunt driving, like in Forza Horizon 5, for real-world car features and handling. The right tires for the right track are important, as are the myriad other options, like brakes, shocks, body modifications, and more. I’ve spent more time tweaking a 2006 Mini Cooper in this game than I ever thought necessary (don’t laugh, it has great natural handling and fast acceleration), and I’m not even close to getting this car ready for some of the more complicated tracks in this game.

Weather elements play a huge role when racing, and making sure you are prepared for inclement driving is the key to a successful run. But it’s not just rain, as driving in warmer locations can also affect your tires’ grip on hot pavement and could change the way the car handles. And with the DualSense controller, you can actually feel the difference.

As amazing as everything is from a gameplay standpoint, the implementation of the DualSense’s features pushes Gran Turismo 7 into a whole ‘nother level of driving simulation. The adaptive triggers and haptic feedback give you the sense of actually driving, as you can feel the tires shudder on the left side of the controller during a hard right turn and the subtle rumble of smaller engines ramp up to a controller-shaking quake with more powerful blocks. Shifting gears is recreated splendidly, as even small bumps in the tracks can be felt as you drive over them lap after lap. There’s even an option to use the DualSense’s motion controls like a steering wheel, which I have found is incredibly intuitive at 1:1 and allows for near-perfect steering even on the tightest tracks. The DualSense is the MVP of the Gran Turismo 7 experience and it helps separate it from any other driving simulation on the market.

The PlayStation 5’s powerful features are integrated into Gran Turismo 7, including ray tracing and true 4K (2160p, HDR, at a consistent 60 frames per second) gaming. Everything looks absolutely stunning from top to bottom, and I can say without a doubt that this is the best-looking racing game I have ever played. Day-night effects are so realistic that my wife has been fooled a few times, thinking I was watching a race when I was actually the one doing the racing. In the Scapes photo mode, you can put your cars in the middle of real-world locales to take photos, and the end results are so life-like it’s mind-boggling.

Further adding to the immersion is the 3D spatial audio, especially when using the Pulse headset. On top of the killer soundtrack, which I will get to in a second, the sounds of driving are recreated here in ways I never knew could be done. Hearing rainwater splash on your windshield and the wipers wick it away, all the while still hearing the driver coming up on your left in a hotly contested race really helps blur the lines between reality and fantasy, and Gran Turismo 7 seems to flaunt its ability to make you question if this is a game or real life. And that’s just barely hyperbole. I’ve never played a driving game like this, and I’m not sure this series has a peer in this regard.

The aforementioned soundtrack is a mix of licensed tracks and scores, and one of my favorite bands, The Afghan Whigs, has contributed a new song to the game, which I absolutely love to hear when it comes up during a run. Gran Turismo 7 doesn’t rely too heavily on the soundtrack, but it’s there to give your ears something else to listen to above and beyond the primal roar of finely tuned engines and the squeal of new tires on hot pavement.

On top of the stellar gameplay and visuals, developer Polyphony Digital’s love of all things cars really shines. The more you delve into a particular car or manufacturer, the more you learn the history of that car maker. As a history guy, I was fascinated just reading about how certain cars came about and have evolved over the years, and the game even prefaces certain hallmarks in the long history of the automobile to real world 20th century history. I’ve loved reading all about this and have found a new appreciation for certain cars. I’m in no way a car enthusiast, but Gran Turismo 7 is certainly a gateway into that lifestyle, and the more I uncover, the more I understand the culture and the need for more, more, more.

Gran Turismo 7 is a stellar love letter to all things cars, and Polyphony has delivered a driving simulation that appeals to veterans of the series, as well as newcomers, creating an experience that can be loved by all. Using the power of the PlayStation 5 and the wonder that is the DualSense controller, this is the driving game to end all driving games. I’m kind of mad that it took me 25 years to come around to this series, but I just wasn’t ready for what GT had to offer until now. I can say without a doubt that I am glad I’m now a part of this franchise, and my racing career may be in its infancy, but it will mature into something more as I continue my long and feature-filled journey into this fascinating world. I could never before be confused with a true car enthusiast, but thanks to Gran Turismo 7, that is all about to change.

Gran Turismo 7 is a "real-driving simulation" revelation, taking full advantage of the PlayStation 5's power and the DualSense controller to create one of the best racing games ever.