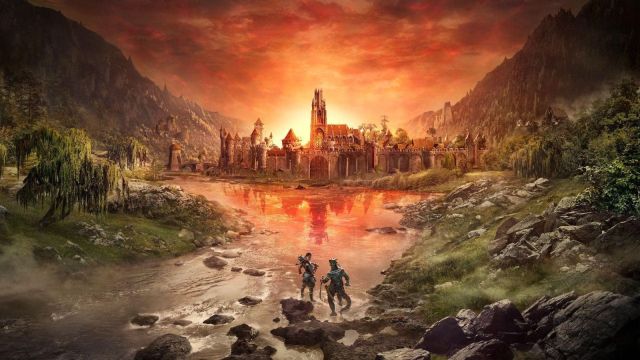 Originally planned to be an arena fighting game, Arena later became The Elder Scrolls: Arena, and a massive gaming franchise was born from the basements of Bethesda, Maryland.

A high fantasy role-playing game series, The Elder Scrolls features some deep lore and mesmerising attention to detail, and set trends for future video games. But how does one explore the world of Tamriel in chronological order? Where should you start?

How to play The Elder Scrolls games in order

There are five mainline games, a few spin-offs, and some mobile games, but here’s the correct chronological order.

An extensive world like that of The Elder Scrolls seems a natural fit for an MMORPG, and production on ESO began in 2007 – a year after Oblivion hit the shelves. Set during the Imperial Simulacrum, the base game and its many add-on chapters and dungeons are the first chronological entries in the franchise. Officially, there is no canonical order to playing the base game’s quests or add-ons, but fans tend to say that new players should play the DLC by order of which they were released.

At the time of writing, that means starting with the 2016 Orsinium expansion and making your way to 2022’s High Isle.

A curious artefact of the early days of the franchise, Redguard was a single-player action game with very few role-playing elements. Players take the role of Cyrus, a Redguard searching for his sister on the mysterious island of Stros m’Kai, far from his home in Hammerfell. As things tend to do in The Elder Scrolls, it gets more complicated, and the character of Cyrus is later seen in Skyrim as a corpse: some two thousand years later.

It’s the first ever game in the franchise, released in 1994 with one Todd Howard serving as part of the team to port it to other platforms as his first job at Bethesda. Players seek to assemble the Staff of Chaos so they can stop the Imperial battlemage Jagar Tharn from ruling Tamriel, while he is impersonating the emperor. Jagar Tharn’s family feature prominently in The Elder Scrolls Online, with them serving in the Emperor’s council.

A portable game from the 2000s, little is truly known about Shadowkey or its place in canon. Set in the border between High Rock, Hammerfell, and Skyrim, it follows (in classic Elder Scrolls fashion) a little known about peasant becoming part of a grander story. Curiously, the game implies Jagar Tharn is still alive after the events of Arena. The game’s final dungeon Crypt of Hearts “later” appears in Elder Scrolls Online.

A much more classic dungeon crawling game somewhat inspired by DOOM, it was originally intended to be an add-on for Daggerfall which had released the previous year. Battlespire sees the player character start their time at a mage’s college before realising the other students had all been slaughtered by the Daedric Prince known as Mehrunes Dagon. An unfortunate first day.

A truly massive game, Daggerfall saw one of RPG genre’s first instances of procedural world generation, making it a nearly endless world to discover. The story sees the player character investigate mysterious happenings in the Iliac Bay region, before learning the fate of the world depends on them. The game’s five endings are all canon, with future games explaining that citizens all just had massive Mandela effects known as the Warp in the West.

Some four hundred years after Daggerfall, a prisoner is sent to the alien land of Morrowind to uncover a grand conspiracy which could consume not just Morrowind, but the empire itself. Arguably the greatest game in the series, Morrowind had massive ramifications for future games. Skyrim in particular saw players return to a small island off the coast of the land known as Solstheim, which appeared in Morrowind’s add-ons.

After the Emperor is assassinated by members of a cult, the empire is thrown into chaos as portals to Oblivion open across Cyrodiil. The player must defend the province and the realm of the hordes of daedra, before going on a journey to the Shivering Isles to sort out some more Daedric Prince madness. The game was the first in the series to be launched on Xbox 360 and PlayStation 3, ushering in a new era of fans.

A collectible card game in the style of Hearthstone or Magic the Gathering, Legends‘ main story saw an old mystic retelling a tale from the Great War, which happened 25 years prior to the events of Skyrim. Other story packs also includes tales from 4E 188 and 4E 201, as well as a time nondescript tale set in the Clockwork City.

200 years after the events of Oblivion, dragons return to Skyrim as Alduin the World-Eater seeks to live up to his name. The most recent mainline entry in the franchise, Skyrim introduced several new elements to the world including the Great War. A fractured Empire, an empowered Aldmeri Dominion, and a Skyrim which is embroiled in civil war.

The Elder Scrolls games are almost all available via GOG.com, Steam, PlayStation and Xbox.