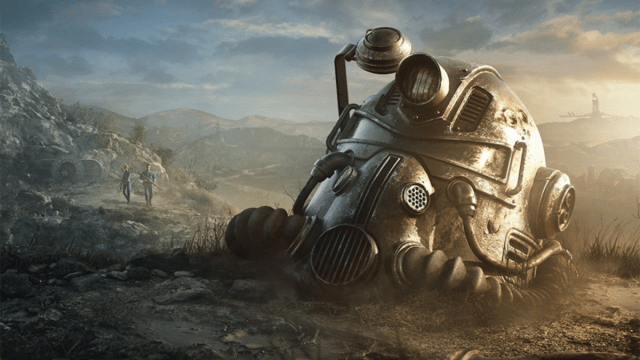 The seminal post-apocalyptic video game series Fallout has come a long way since its 1997 debut from Interplay Games, and is now one of the biggest names not just in role-playing games but in all of gaming.

Filled with dark satire of American consumerism, red scare ideology, and critique of humanity’s inability to maintain peace, Fallout means a lot to many people. With it becoming a fully-fledged franchise, how does one experience the video games in proper order?

How to play Fallout games in order

Here’s the correct chronological order to play the Fallout saga in.

Despite being (at time of writing) the most recent release in the series, 76 is set the soonest after the nuclear apocalypse. Exploring the wastelands of West Virginia wasn’t an easy ask at launch, but with consistent updates has really cemented itself with fans. Includes some fascinating new lore, as well as harrowing world-building with themes of unionization and working class revolt.

Kickstarting a franchise that was a spiritual successor to the Wasteland series, Fallout presents a classic alternate history scenario around the post-apocalypse inside this 1950s Americana lens. Its humble origins see a plot that seems simple: get a chip for your Vault to restore water. Nearly 90 years after nuclear Armageddon, you get a taste for this world.

An odd duck in the series, and its canonicity is still disputed throughout the rest of the series. Set in post-war Chicago and the Midwest, players take control of a chapter of the Brotherhood of Steel as they make their way through a territory war that gets more and more complex. There’s a few remnants of this game in future titles, too.

Perhaps the most outlandish entry in the series, Fallout 2 really dialled up the wackiness which helped set the tone for future instalments in the franchise. Set eighty years after Fallout, this is one of the rare cases in this franchise of a sequel being a direct follow-up to events from its predecessor.

After Interplay ceased to exist, Bethesda Games Studio acquired the rights to the franchise. With their first ever version of Fallout, they turned it from isometric combat to a first-person shooter. Heralded at the time for its roleplaying capabilities, it is mostly unrelated to events from previous games. A classic from 2007, it’s often in the conversation for best in the series.

Obsidian Entertainment was founded by ex-Interplay developers, including Chris Avellone. Given the chance to develop a Fallout spin-off, they went back to its west coast routes. A masterpiece of roleplaying and choice, it’s very a love letter to the world set up in the first two Fallout games. Who knows, maybe we’ll see a New Vegas sequel in the future?

After many years of hype and speculation, Fallout 4 was released in 2015 with it perhaps sacrificing some of the previous game’s roleplaying capabilities, but upping the overall gameplay. Following up on some loose ends from Fallout 3′s Brotherhood of Steel story and a cheeky Institute story seeding, it’s set ten years after 3 in Boston.

Modern Fallout games can all be accessed via the Xbox Game Pass, while Fallout 4 is included in PlayStation Plus.