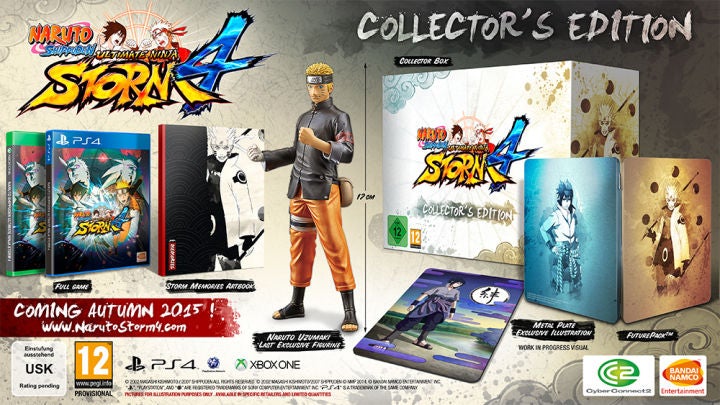 Collector’s editions of video games aren’t always worth the massive asking price, but Naruto Shippuden Ultimate Ninja Storm 4 (yes, it’s a mouthful) is shaping up to be one that you might want to consider purchasing.

The limited edition bundle comes with an art book, the full game packaged in a commemorative steel-book case, a metal plate illustration and, last but not least, a 17cm tall Naruto Uzumaki figurine. The figurine, in particular, is likely to get fans of the anime excited, as it has been created through a partnership with TSUME-Art.

This year is an amazing one for all Naruto Shippuden Ultimate Ninja Storm lovers: an amazing partnership with TSUME-Art, a highly exclusive Collector’s Edition, tons of never-before-seen characters to be playable and much more to come in the upcoming months! Bandai Namco Entertainment and CyberConnect2 are looking to surpass every Naruto Shippuden game ever created and deliver an amazing video-game experience!

If you’re not willing to shell out for what is bound to be an expensive collector’s edition, anyone who pre-orders the game will receive exclusive character skins, actual characters and early access to the game itself. Whew.

Looking forward to Naruto Shippuden Ultimate Ninja Storm 4? Let us know in the comments below if you’re going to be picking up one of these premium collector’s editions.