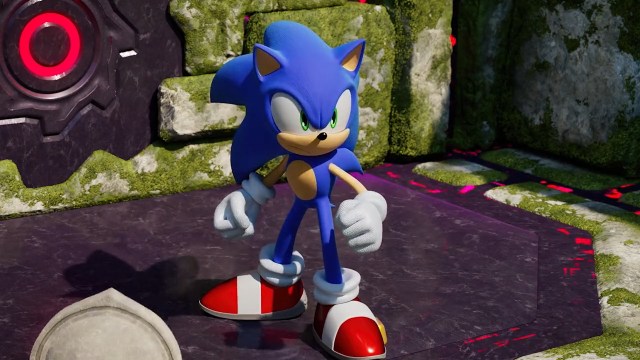 The best-looking trailer we’ve yet received for the upcoming Sonic Frontiers came with an official release date for the game that is quite a bit sooner than many may have expected, a couple of weeks before many of us will be gorging on turkey and cranberry sauce.

The new trailer premiered at Gamescom Tuesday and was later shared on the official Sonic the Hedgehog Twitter account.

The new trailer features Sonic rescuing a cute stone creature, known as a Koco, from some kind of mechanical foe. A mysterious woman appears, who looks like a digital projection that warns Sonic his actions threaten their world. We are then treated a lot of great-looking gameplay footage that shows a variety of different settings, some of which resembles classic-looking Sonic levels.

It’s hard not to get excited with this latest Sonic Frontiers trailer, especially considering it has seemingly shown us even more about the story and overall feel of the game than ever before.

What we know about Sonic Frontiers so far is that it is touted as being Sega’s attempt at reinventing the franchise. The mysterious “open zone” structure has been a point of much debate since the initial reveal for the game surfaced, with some mistakenly characterizing Sonic Frontiers as being full-blown open world. However, developers have since gone on the record to clarify Sonic Frontiers won’t be open world but instead will consist of a series of more open-ended “zones” — via a series of islands — that contain within them more traditional, linear Sonic levels.

Sonic Frontiers will be available on Nov. 8 on most modern consoles, including PlayStation 4, PS5, Xbox One, Xbox Series X/S, Nintendo Switch, and PC.