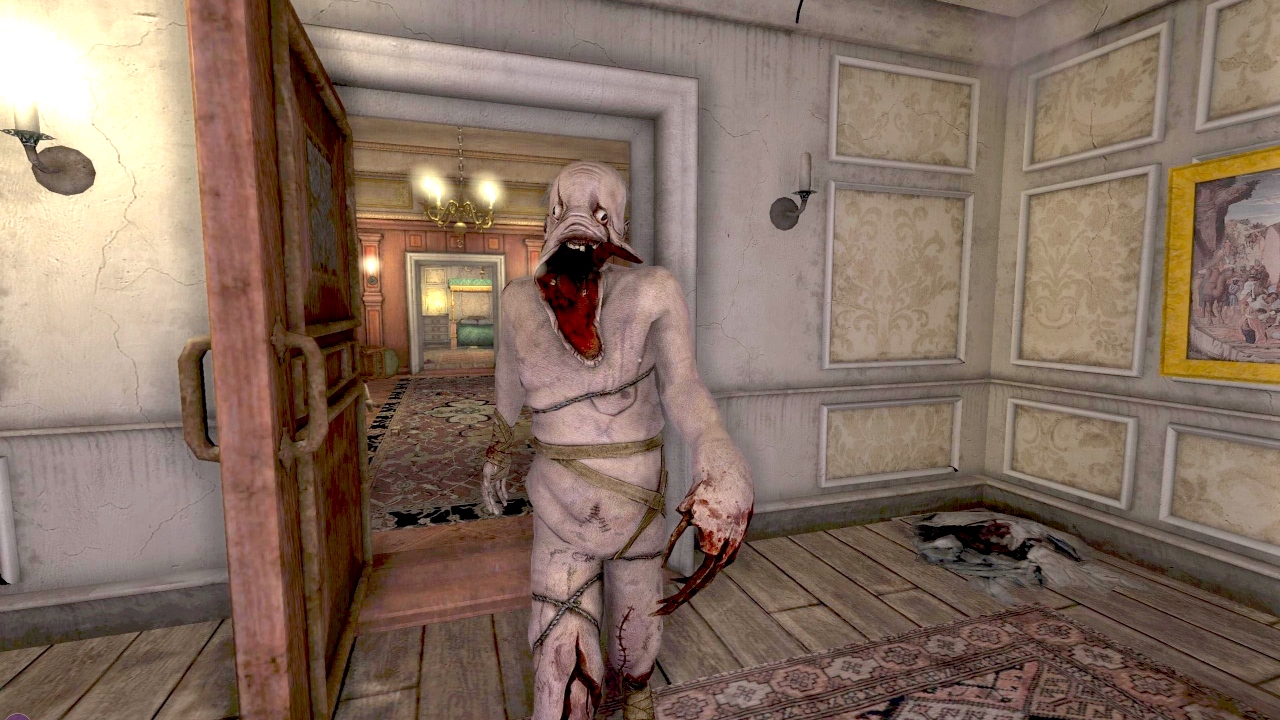 Mainstream horror games are ridiculously popular nowadays. Dead by Daylight, Resident Evil, Silent Hill, and The Evil Within are among the scariest and the greatest horror games ever made, crafted by well-known developers like Capcom, Behaviour Interactive, Creature Labs, and Tango Gameworks. However, buried beneath the overwhelming commercial success of famous titles, there are independently funded, created, and distributed horror games that have all the reputation of larger names and none of the global recognition.

“Indie” horror games lack the financial and technical support granted by larger game publishers and thereby operate with smaller development teams and creative freedom. These unconventional games often have innovative approaches and experimental gameplay that produce unique experiences. Even with substantial setbacks, indie horror games are widely revered and ⏤ in some instances ⏤ more personable than established franchises. Made by fans for fans, these indie horror games are the undisputed champions of the unorthodox video game realm.

Survival horror Amnesia: The Dark Descent ⏤ made by Frictional Games ⏤ makes use of an ominous ambience and strongly focuses on sensory input to radically diminish the barrier between fiction and reality. Players control the protagonist Daniel, who must navigate an environment known as Castle Brennenburg while avoiding various monsters and solving puzzles. Amnesia: The Dark Descent has often been cited as one of the “successfully frightening games of all time” or some description to that effect. It has been included on many “10 Best Horror Video Game” lists and has frequently ranked highly among competitors. Even in 2018, eight years after its release, Amnesia has made several “greatest horror games” lists to prove its long-lasting influence.

Taking place on a forested peninsula, The Forest follows Eric Leblanc, the survivor of a plane crash who must brave the elements and fend off cannibalistic mutants in a relentless search for his son, Timmy. The Forest is played from a first-person perspective and features nonlinear gameplay in an open-world environment without pre-programmed missions or quests, therefore allowing the player to make their own decisions to increase chances of survival. Developed by Endnight Games, The Forest spawned a sequel — Sons of the Forest — from its immediate success. The Forest inspires fear using the mechanics of gauging sanity, hunger, and endurance to determine how far the playable character is willing to go in order to survive. Constant plunges into darkness and cannibal stalkers at every turn give The Forest a definite edge over other explorative horrors.

Worldwide phenomenon Five Nights at Freddy’s — developed and published by Scott Cawthon — takes place in the fictional family pizzeria restaurant known as Freddy Fazbear’s Pizza, named after the mascot, an animatronic bear called Freddy Fazbear. Typically, the player assumes the role of a security guard who must defend themself from Freddy Fazbear and the other animatronics, who come alive at night. Using security cameras feeds, limited electrical power and a flashlight, the player must survive a night shift without being jumpscared by the animatronics. If this happens, the game restarts. Inspiring several Let’s Play walkthroughs on YouTube and becoming the basis for many fangames, Five Nights at Freddy’s has gained universal fame for its terrifying subtlety and minimalistic take on conventional horror game tropes.

Red Barrels’ Outlast revolves around freelance investigative journalist Miles Upshur, who explores a remote psychiatric hospital called Mount Massive Asylum. Inside, Miles discovers that the hospital is overrun by homicidal patients and must use stealth tactics (hiding, sneaking, running) to avoid alerting his pursuers. Outlast relies on realism ⏤ as far as fictional games go ⏤ in that Miles is the unfortunate victim of his own inadequacy. He has limited skills as a journalist and doesn’t possess superhuman strength, nor can he physically oppose the patients, so all he can do is run and hide. That helplessness makes Outlast so grounded, intelligent, and unmatched. Rock, Paper, Shotgun said, “Outlast is not an experiment in how games can be scary, it’s an exemplification,” and that statement couldn’t be more true.

Unlike the other games, Slender: The Eight Pages is an entirely free-to-play survival horror based on the Quasi-ostension of the folk legend (commonly referred to as a Creepypasta) figure known as Slender Man, depicted as a freakishly tall humanoid creature in a black tuxedo with a blank face and no facial features. Slender: The Eight Pages tasks players with collecting eight notes located in various areas of a remote forest while being hunted by Slender Man. Similar to Five Nights at Freddy’s, the game has been noted for its effectively minimalistic approach to horror elements, contrasting with other survival horrors gaining traction at the time — such as Resident Evil — and gained a cult following through YouTubers like PewDiePie and Markiplier.

Quite distinctive in its gameplay, Tarsier Studios’s puzzle-platform horror Little Nightmares follows Six, a starved girl who must escape an iron vessel known as the Maw — sharing the likeness of a giant steamboat — inhabited by monstrously gluttonous and disproportionate beings. Nine-year-old Six —armed with only a lighter — navigates the Maw by solving puzzles and sneaking past enemies, soon learning that the Maw is a facility used to imprison children. Little Nightmares makes use of an ever-present suspense and delivers a never-before-seen experience unlike any other. Somehow, Little Nightmares makes your skin crawl without amping up the fear factor using sensory overload. Its beauty lies in its innovative and disturbing little quirks.

Steering away from survival horror, P.T. (an acronym for “playable teaser”) brings about the psychological disturbances in this Kojima Productions delight. Originally serving as an interactive teaser for the canceled game Silent Hills, the first-person perspective used in P.T. deviates from the third-person perspective pattern seen in the Silent Hill franchise. Its premise revolves around the continuous reincarnation of an L-shaped corridor with an adjacent bathroom in which the player investigates frightening events and solves puzzles to further progress and trigger changes in the corridor. The P.T. demo is immersive and perfectly equipped to instill fear and crack even the toughest of cookies. P.T. was placed on some of the “best-of” lists during 2014 and GameSpot awarded it the “Game of the Month” in August 2014.

Among the Sleep was developed by Krillbite Studio and its first-person exploration element uses the perspective of a toddler called David. Within the limited capabilities of a young child, the player can move or crawl around and climb objects to reach greater heights and solve puzzles. For the majority of the game, David is accompanied by a sentient teddy bear known as Teddy that presumably resides in the child’s imagination. In a dream-like state, David must navigate each level while being pursued by various monsters. Among the Sleep is a distinctive experience and essentially every defenseless infant’s worst nightmare — which makes it instinctively frightening — considering that we can all relate to the loneliness that comes from losing our mothers at such a vulnerable age.

Inspired by the 1999 film The Blair Witch Project, the Bloober Team developed Blair Witch, a survival horror set two years after the events of the aforementioned film that follows former police officer Ellis Lynch on a relentless search for a missing boy in Black Hills Forest. Focusing on traditional survival horror and stealth mechanics, Blair Witch encourages players to use helpful items such as a camera, cellphone, flashlight, or Ellis’ dog, Bullet, to track down the missing nine-year-old while fending off shadowy creatures — presumably descendants of the Blair Witch curse. Like The Blair Witch Project, Bloober Team’s video game sequel integrates found-footage techniques within its cinematography. If nothing else, Blair Witch is endlessly interesting and sufficiently draws on the franchise’s lore to become a valuable and faithful continuation.

Poppy Playtime — the most recent release on the list — was developed by MOB Games and revolves around a former Playtime Co. employee who revisits the toy factory 10 years after it was abandoned. As the player progresses through the game, they must solve puzzles — sometimes requiring a special device known as a GrabPack — and avoid Huggy Wuggy, the Playtime Co. mascot and a sentient humanoid figure with rows of jagged teeth. Essentially, the objective is to free the titular Poppy Playtime from imprisonment in a display case. Poppy Playtime has an engaging atmosphere and a comprehensive backstory that truly gives the production its depth and generates lore for future sequels and spin-offs. Honestly, if Poppy Playtime itself doesn’t scare you, Huggy Wuggy definitely will.