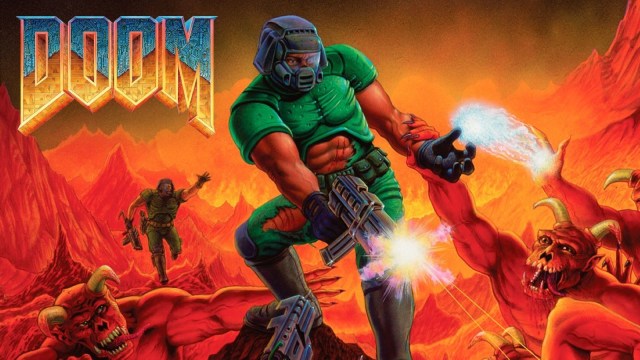 id Software’s 1993 shooter Doom is one of the most important titles in gaming history. On its release, it blew gamers away with its combination of intense first-person-action, a pumping heavy metal soundtrack, oodles of ultraviolence, and introduced us to the concept of the deathmatch. Since then, it’s gone on to be available on every gaming platform under the sun, from the Super Nintendo right up to modern consoles like the PlayStation 5 and Xbox Series X.

Along the way, Doom has acquired another fun reputation – it can run on anything. On release, it was considered to be pushing the boundaries of technology, but after nearly thirty years, every conceivable computer on the market can run it. And, with smart devices making many unexpected devices into mini-computers, with a little hacking you can chainsaw apart a cyberdemon in the weirdest ways.

If it’s got a display and a processor, someone will port Doom to it, so few were surprised that the first generation Apple Watch saw a Doom port soon after its release in 2015. Even so, there’s something adorable about seeing Doom on a wristwatch, even if the touch-based control system on the tiny surface looks like a nightmare to actually play.

This port was the product of a ten-hour hackathon by programmers Lior Tubi and Mehdi Mulani, who count original Doom creator John Carmack amongst their colleagues. You control this version of Doom using a 3×3 grid on the touchscreen, with the bottom ones used for movement and the top ones for interaction. Nobody’s going to be setting any speedrun records using this port, but it’s still a beautiful technical feat.

Doom on a 1990s oscilloscope

With the rise of the dreaded ‘internet of things,’ it’s no longer such a surprise that appliances like refrigerators or ovens contain miniature computers. But, back in the 1990s, such things were still rare, so it’s impressive that this 1998 oscilloscope from Hewlett Packard has a whole damn PC stuffed inside it. Hewlett Packard didn’t want users actually accessing the Windows OS, though modern users have figured out ways to hack into it and run whatever software it can handle.

This video from the ‘Gears and Gear’ channel shows that the oscilloscope – generally used to measure voltages – is able to run Doom perfectly. Electricians and engineers everywhere can celebrate, as while their boss thinks they’re busy analyzing waveforms and debugging circuit designs, they can actually be blasting the forces of hell on Mars.

Doom on the Nintendo Entertainment System

You’re forgiven for being skeptical that Nintendo’s first home console, released in the US in 1985, can run Doom. Well, here’s a Doom cartridge that can be inserted into any genuine NES console and it’ll run. So, how does a game whose minimum requirements are 8mb of RAM and a 33MHz CPU squeeze down onto a console with 2kb of RAM and a 1.79Mhz CPU?

Well, there’s some trickery at work here. The cartridge itself contains a Raspberry Pi that’s doing the gruntwork of actually running the game, with the NES both powering the board and delivering the signal to the TV. However, there were many cartridge releases that pushed 8 and 16-bit consoles beyond what they were capable of, with the most famous example being the SNES’s Super FX chip (which also ran Doom). So, we’re giving this a pass.

Doom on a 1998 Kodak digital camera

Throughout most of the 1990s, cameras still used film and people needed to trek down to a supermarket or pharmacy to get their roll of film developed. That slowly began to change as the decade progressed and the first digital cameras hit the consumer market. These were primitive compared to any modern phone camera: taking low-resolution pictures and having limited storage space, not to mention costing upwards of $1000.

But some cameras pushed the limits, with Kodak’s 1998 ‘Intelligent’ cameras billing themselves as able to both take and edit pictures from within the camera using an onboard computer. Not only that, they promised that users could install custom photography apps. Pretty advanced for 1998!

So, it’s got a screen, a d-pad, a decent processor and storage… Sounds like it’s time to save Mars. Youtuber LGR took the plunge, showing that it’s tough to play using a d-pad for movement and the zoom wheel to shoot. But hey, it works!

Doom on a John Deere tractor

This one comes with some political relevance. Farming technology is increasingly locked down with proprietary software that can’t be altered, modded, or repaired, leaving individual farmers at the mercy of manufacturers like John Deere. It’s got to smart that you can pay an eye-watering $400,000 or so for a tractor harvester, but that doesn’t give you the right to use it as you see fit.

That all changed in this year’s DefCon, where modding group Sick News broke the news that they’d cracked John Deere’s systems. And what better way to demonstrate this? Yup, you guessed it, Doom. Even better, this is a tractor-themed version of the game that sees Pinky demons running amok in a cornfield. As the modders said:

“Liberate the tractors! We want farmers to be able to repair their stuff for when things go wrong, and now that means being able to repair or make decisions about the software in their tractors.”

Proponents of the ‘right to repair’ movement argue that locking down farming equipment software is dangerous, as it effectively makes the hardware reliant on the existence of the manufacturer. Hacks likes this give farmers options if things go wrong and could help prevent failed harvests and food shortages. Also, Doom on a tractor just looks cool.

Doom on a pregnancy test

Self-described “hardware/software necromancer” @foone has a long history playing Doom on unlikely devices, but seeing it on a pregnancy test has to be their greatest feat. So, how does this work? Well, the screen itself is a tiny one-color 128×32 pixel LCD intended to show very simple graphics like an hourglass or to display the word “pregnant.” But even a screen as simple as this has inputs, so Foone set out to shrink Doom down to this tiny resolution and get it on the screen.

Armed with a BlueTooth keyboard, it’s just about playable, though figuring out which white blob is a cacodemon and which is an imp looks near impossible. We still think there’s untapped potential here though, and wonder whether it’d be possible to blast the shotgun by peeing on the strip? Just asking questions.

Doom can now be played on so many things people jokingly describe it as able to “run on a potato.” YouTuber Equalo decided to take that literally, with stinky consequences. Most people will have seen high school science experiments showing you can generate electricity with the acids and salts of a potato, though they’re only able to power a very dim bulb or a clock.

But how many potatoes would it take to run Doom? Equalo did the math and figured he’d need 100 pounds of boiled potatoes (boiling increases the amperage) cut into slices. Plug that into a Raspberry Pi Zero and theoretically it should power up and run Doom. It didn’t work and after a few days of trying the potatoes began to go bad. Plan B was a Texas Instrument TI-84 calculator, which can run a very, very cut-down port of Doom.

Plug in the potatoes and… success! Potato-powered Doom! The only downside was a garage crammed full of moldy spuds. As Equalo understandably concluded: “So, I hate potatoes now.”

This might be the final form of Doom running on things, with the game managing to run on… itself. This feat comes courtesy of an exploit in the DOS version of Doom 2 that allows players to execute code from within the game. And if you can run code on Doom… why not put Doom on it?

And so, through technical wizardly we don’t fully understand, modder kgsws got the ‘Chocolate Doom’ source port (and Heretic) running within Doom. The game is playable in a custom ‘movie-theater’ level that features interactive screens explaining the mod and how to play it, with the player then able to control the game from within their own game. Can you run Doom in Doom in Doom? How far down the rabbit hole does this go?

With coders and hackers getting ever more talented and creative, and with a ridiculous amount of modern devices featuring the minimum hardware, displays, and inputs to run Doom, expect to see it in more and more unusual places.

Just imagine, in the dark cyberpunk future we’re rapidly heading into, perhaps Doom could run… on you!