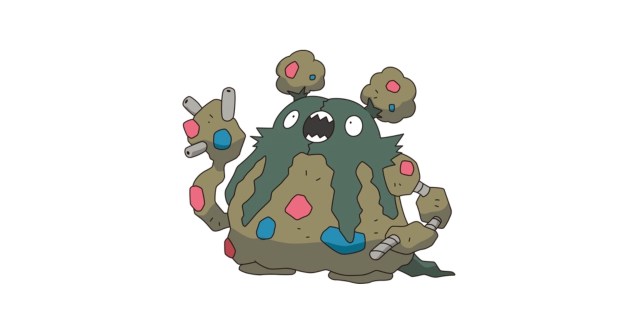 The media franchise Pokémon has been around for decades, and it doesn’t show any sign of going out of style. With an anime series, films, and many games, the franchise has weathered the test of time and come out as popular as ever.

However, with the hundreds of Pokémon that have been designed and released by the Japanese media franchise, there have undoubtedly been some duds. The following are each of the Pokémon types and their most unattractive counterparts.

Silcoon is one of the two evolved forms of Wurmple. Before it transitions into the caterpillar-like Wurmple, it must go through a pupal stage as Silcoon, a small, circular, fuzzy Pokémon with spikes protruding from every side and two red eyes poking out from its fluffy, silky face.

Eventually, it evolves into a Beautifly, which can’t come soon enough considering Silcoon is the most unfortunate-looking bug type.

A flying/water-type, Cramorant is a tall avian Pokémon covered in blue feathers. This dodo-like bird is often forgetful and won’t hesitate to attack anyone who comes near its food. However, it will never forget a trainer it’s grown to trust, so even though it’s a simple-minded, food-motivated, ugly Pokémon, at least it’s loyal.

Nosepass is a land-dwelling Pokémon with a magnetic nose that causes it to always face north. Two Nosepasses cannot approach each other headfirst because their noses will repel each other, just like their unsightly appearance repels Pokémon trainers.

A steel-type legendary Pokémon, Registeel is speculated to have been created from metals found in fallen meteorites. However, despite coming from the heavens, it’s anything but angelic-looking, having a short, bulky body and stubby hands and feet.

Carnivine is one of the strangest-looking Pokémon. It resembles a Venus Flytrap with its huge jaws and red and green vines it uses to hang from trees in the marshes it inhabits. They remain immobile most of the time, disguising themselves as plants and enticing prey into their mouths by drooling a sweetly scented saliva.

Eelektriks are cave-dwelling creatures who slither about in a constant search for food as they are voracious eaters. The spots that run down their bodies can release electricity in short bursts, which proves helpful when it comes to capturing and dispatching of prey. And it’s a good thing they have this capability, because they’re not attracting anyone with their appearance.

Drowzees consume dreams – especially those of young children and other Pokémon. They get sick from bad dreams, which are said to taste sour, so they use their noses to differentiate between good dreams and bad dreams. The bottom half of its body is covered in mud as if bathing in it. How can it expect to be anything short of unattractive if it doesn’t take pride in its appearance?

Mamoswines look like chubby wooly mammoths, but despite their size, they are not very aggressive. Glaciers began to thaw as the climate warmed, and their populations began to dwindle. While they are an eyesore, it’s a shame that these gentle giants are endangered.

Dragapult and its evolutionary family are ghosts of prehistoric aquatic Pokémon. They care for groups of Dreepy, which are used as missiles in battle. However, much of Dragapult’s behavior is a mystery, just like its interesting appearance.

Despite the Granbull’s fearsome appearance, it is actually very timid and will not bite unless startled. Additionally, if their friends, offspring, or others they care for are threatened, they will attack the offenders. Their loyalty, not their appearance, makes them popular pets.

Overqwils are as unwelcoming as they look. They are detested by those who interact with the sea. They are known as “sea fiends” and frequently harass other Pokémon. They’re so loathed that in some settlements, fishermen developed elaborate ceremonies to stop the Overqwil from terrorizing their waters.

Huntail dwell in deep ocean waters where there is little light. However, their eyes are keen and can even see in the dark waters. It uses bioluminescence to capture prey, and it is said that a Huntail washing up on shore is a bad omen.

Spiritomb are a ghost/dark-type Pokémon that are ghost-like in appearance. They are made up of 108 spirits and have the ability to possess living beings. They can be destructive and aggressive.

Magmar’s body is designed to camouflage itself in fire, so it’s mainly red and yellow. They have the ability of Flame Body, and their body temperature is 2,200 degrees Fahrenheit. Its body also shimmers like the sun, and its breath can cause small heat waves. However, while it resembles Charmander and Chimchar, it is pretty strange-looking.

These Pokémon look as strange as their name. Conkeldurrs are based on a buff clown-like construction worker holding two pillars of concrete. The Conkeldurr is believed to have learned how to make concrete thousands of years ago. In combat, they rely on brute strength to defeat their enemies.

Loudreds are a normal-type Pokémon introduced in Generation III. They’re bipedal creatures with a square build, and unlike their pre-evolution, they aren’t as timid. During the mating season, they can be seen engaging in shouting matches with others of their kind to attract mates. The competitions only end when they finally tire and walk away. They seem to have to try especially hard to attract their mates.

This monstrous-looking Pokémon appears to have come from a toxic sludge pile. It has a gaping fang-filled mouth, and the bottom part of its body is made of filthy, garbage-like slime. They absorb toxic waste and use it to build their bodies. Additionally, they consume vast amounts of garbage daily. You know what they say– you are what you eat.