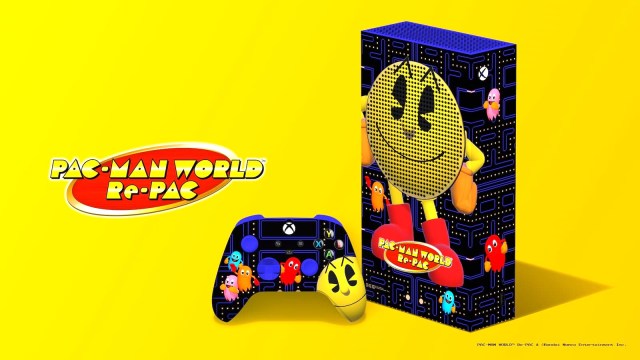 It’s 2022 and a new Pac-Man game has been released ⏤ well, a new remake of the 1999 classic Pac-Man World. Pac-Man World Re-Pac was released on Aug. 26, 2022, on PlayStation 4, PlayStation 5, Nintendo Switch, Xbox One, Xbox Series X/S, and PC. To celebrate the release of the new game, Xbox and Pac-Man have teamed up to launch the Pac-Man Xbox Sweepstakes, which will give one lucky fan the chance to win some amazing prizes.

Let’s take a look at what you can win in the Pac-Man Xbox Sweepstakes and how exactly you can enter it.

How do you enter the Pac-Man Xbox Sweepstakes?

Xbox has let fans know about the sweepstakes via Twitter, as it requires a Twitter account to enter. The tweet, which is shared above, reads, “It’s a Pac-Man World and we’re just living in it. Follow and RT with #PacManXboxSweepstakes for a chance to win this Pac-Man World Re-Pac Xbox Series S.” To enter, you have to use your Twitter account to retweet the Twitter post above and include the hashtag #PacManXboxSweepstakes, but you have to be following the @Xbox Twitter account as well. You also have to be over 18 years of age to enter, and following these entry details will get you one sweepstakes entry.

As you can see from the tweet, the prize you can win is a sleek Pac-Man Xbox Series S, which is the slightly less powerful and all-digital version of the next-generation Xbox consoles. In the same prize pack, you can win a controller that has the same pattern as the console and a blue maze like the original Pac-Man, with ghosts and Pac-Man himself on both.

The prize pack also gets you a copy of the game, which is not actually mentioned in the tweet but contained in the rules that Xbox has linked. The rules do state that the winner will receive “A PacMan game code,” but because the sweepstakes are running so close to the release of Pac-Man World Re-Pac, we can assume that a copy of that game will be given away. Although that is not the only Pac-Man game to be released this year, a collection of older games in the franchise was released earlier in 2022 called Pac-Man Museum +. This game collected 14 of the games in the franchise.

Follow the information above if you want to enter the sweepstakes, and if you are a Pac-Man fan, go pick up Pac-Man World Re-Pac, which is available now on Nintendo Switch, PlayStation 4, PlayStation 5, Xbox One, Xbox Series X/S, and PC. Good luck!