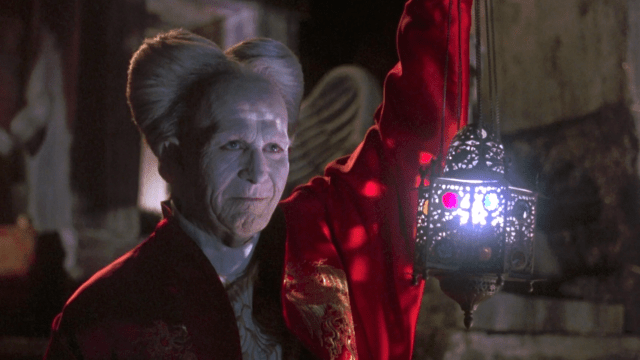 From sparkly heartthrobs to gruesome monsters, vampires have taken the cinema by storm in the past century. And while vampires may be a bit overdone on the big screen, there’s still plenty to love about the undead bloodsuckers. Indeed, what’s great about the vampire trope is that it can fall into any genre, including horror, action, comedy, and romance, meaning there’s a little something for everyone. Considering the abundance of vampire movies, there are many to choose from, whether you’re looking for a steamy romance, a psychological drama, or a good old-fashioned blood fest. So sink your teeth into these 10 best vampire movies.

Van Helsing is a notorious monster hunter sent by the Vatican to hunt the powerful Count Dracula. With the help of his ally Carl and the beautiful princess Anna Valerious, he must end an ancient curse plaguing the Valerious family by defeating the ruthless vampire.

The movie received mixed reviews, with people criticizing it for its lack of storyline and cheesy antics. However, there is an abundance of people who love it for its campy plot, the action-packed escapades of its characters, and pleasing visuals. It’s a silly, fun fantasy adventure that’ll keep you captivated throughout.

Selene, a member of the vampire “Death Dealers” squad, finds herself thrust into the middle of a centuries-old war between her elite vampire clan and a brotherhood of lycanthropes. However, after the death of the lycans’ leader, Lucian, Selene meets the doctor Michael Corvin and, in the process, unearths a conspiracy. After becoming involved with Michael, she must choose between her devotion to her clan and her loyalty to herself.

The story is rich and engaging and borrows from various action films like The Matrix. Although the werewolf versus vampire trope can be considered tired and overdone, Underworld does a spectacular job of taking ideas that have already been established and building on them. This, in addition to the excellent visual effects and action-packed plot, makes it an enjoyable experience.

After the vampire Lestat loses interest in immortality and goes into a deep slumber, he awakens after a long period to the sounds of rock n’ roll. However, after becoming the leader of an undead band, Lestat becomes famous and exposes the existence of vampires. Then, when his music awakens Akasha, the queen of the damned and the first vampire, she decides to make him her king.

The film developed a cult following, as many people appreciated the soundtrack and Lestat, played by the handsome Stuart Townsend, in his shirtless scenes.

As arguably the most popular vampire movie of our time, Twilight makes this list despite its cheesiness.

The plot follows Bella Swan, an awkward teenager who recently moved to the gloomy town of Forks, Washington. There, she meets the beautiful Edward Cullen, who’s unlike any boy she’s ever known. Before long, they’re swept up in a passionate love affair. However, Edward holds a dark secret, and when Bella learns what that is, she is pulled into his dangerous world.

It’s a guilty pleasure movie that is cinematically pleasing and undeniably atmospheric. You can’t help but be engrossed in this enchanting film and follow Bella and Edward through their ultimate forbidden love affair.

In dreary San Francisco, a two-century-old vampire, Louis de Pointe du Lac, tells his epic life story to the reporter Daniel Molloy. He recounts his transformation into a vampire, a lifetime of solitude, harsh betrayals, and the constant thirst for blood. However, above all else, he recalls his regrettable decision to embrace the despotism of blood and his beguiling maker, Lestat.

As an adaption of a great horror novel by American author Anne Rice, the film avoids the typical sexy vampire clichés as shown in recent movies such as Twilight. Instead, it portrays vampires as they’re meant to be — monsters with an intense psychological depth.

When Thomas Hutter is dispatched to Count Orlok’s castle in Transylvania, he expects to sell the Count a home in Wisborg. However, Hutter’s journey is unusual, and he finds that the locals are hesitant to take him near the Count’s abode. When he finally reaches the castle, he notices strange occurrences that indicate something sinister is afoot.

Nosferatu is a classic, and many cinema fans feel respect and admiration for it. And even though the film is now a century old, it’s still as nightmarish and powerful as can be.

A mother and her two sons, Michael and Sam, move to the murder capital of the world, Santa Carla, California. There they find that the town is plagued by bikers, mysterious disappearances, and sinister presences. And while the older son, Michael, gets involved with a gang of delinquents, Sam gets into trouble due to his new friends’ obsession with the ominous nature of the town.

With a phenomenal soundtrack, this cult classic makes for a great movie night and a real thrill. It successfully combines comedy, horror, and adventure with an unapologetic ’80s fashion sense.

The half-vampire, half-mortal Blade has one goal — to rid the world of all vampires. After he witnesses Dr. Karen Jenson being bit by a vampire, he successfully fends off the monster. He takes Jenson back to his hideout, where he attempts to heal her. Simultaneously, the vampire Quinn reports back to his master Deacon Frost, who has a heinous plot against the human population.

The movie is well-cast, skillfully written and directed, and packed with action. It’s an enjoyable vampire flick with thrilling fight sequences and smooth dialogue.

Two bank-robbing brothers, Seth and Richard Gecko, continue their crime spree after a bank heist where there were multiple casualties. While heading to Mexico to evade authorities and meet with a business partner, they kidnap the Fuller family to help them cross the border. After they head to the Titty Twister, a grungy dive bar, they meet an unholy and bloodthirsty fate.

It’s brilliant, violent, and bloody — yet still charming and funny. The actors’ performances, including George Clooney and Quentin Tarantino, the original plot, and the sexy dance scene courtesy of the seductive Salma Hayek make this flick a fan favorite of many vampire movie fans.

Young Jonathan Harker is sent to a somber village in eastern Europe to conduct business with Count Dracula. However, he is captured and imprisoned by the vampire, who then travels to London to find Harker’s betrothed, Mina Murray, the seeming reincarnation of his lost love. In London, Dracula begins a rampage of terror, making it necessary for those who find themselves involved in his plot to rally together and stop the dreaded vampire.

This visually stunning film has beautiful colors, lavish sets, and an aesthetically pleasing cast, complete with Winona Ryder and Keanu Reeves. However, it isn’t all beauty, as there are horrific, bloody moments throughout that make it a true vampire masterpiece.