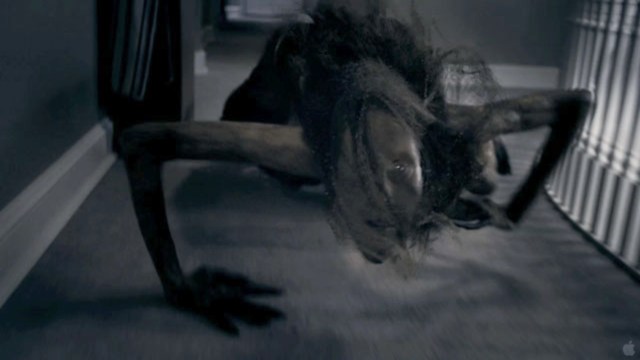 When we think of the scariest horror villains, our minds wander to genre-defining serial killers like Michael Myers, Freddy Krueger, Leatherface, Pennywise, etc. What do all those murderers have in common? They’re all men. Even Ghostface, whose recent appearances reveal females behind the mask, and Jason Voorhees, who’s essentially the copycat killer of his mother Pamela Voorhees, were made famous by their male counterparts. No one remembers Ghostface as Mrs. Loomis because everyone associates the origins of the costume with Stu Macher and Billy Loomis. Likewise with Friday the 13th, no one knows the killer as Pamela, only Jason, who popularized the use of the franchise’s hockey mask logo.

We’re not preaching feminism here, but there are countless female villains — especially in horror — whose mere presence and fear factor are overshadowed by the more well-known males. As the saying goes, “give credit where credit is due,” and although they might not be household names, these leading ladies of horror are notorious in their own right for being downright terrifying.

Although not an obvious choice, bare with us on this one. John Kramer / Jigsaw is the mastermind behind the convoluted traps/games, which in themselves teach a lesson — making survivable traps to test a subject’s will to live while imposing a sense of moral justice. Amanda Young herself isn’t scary; she looks like an average thirty-something-year-old who famously becomes (at the time) the only known survivor of Jigsaw, then later his apprentice. However, despite her scrawny, vulnerable appearance, Amanda is made more formidable by her cunning. She’s scary because of what she can do, not because of what she looks like. We all remember the ‘classroom trap’ and ‘angel trap’ from Saw III, and that’s all the vivid imagery we need to establish Amanda as a real threat — not to be taken lightly — and infinitely more unsettling because people like her — mass murderers and sadists —actually exist. Plus, that pig mask is just plain creepy.

We’re talking about both doll and human Tiffany, meaning Jennifer Tilly’s physical portrayal counts. Although one could argue that Tiffany is creepier as a doll, it’s Tilly’s portrayal that takes the cake. Like ripping a page from a Joker and Harley Quinn comic, Tiffany is driven by an insatiable lust for Chucky, aka Charles Lee Ray, and a need to impress him. She might not have the Stockholm syndrome that rounds-off Harley Quinn’s obsessive personality, but she’s a close second. Like Amanda Young, Tiffany isn’t inherently scary by definition, but she’d gut you like a fish without thinking twice about it, so that registers as frightening in our book. Chucky might be the main villain of the Child’s Play franchise, but recent continuations — such as Syfy’s Chucky series — have given Tiffany a bigger role in the overarching narrative, even going as far as to make her more unhinged than Chucky himself. For one, she severed Nica Pierce’s limbs so that she couldn’t run away from her. That’s pretty messed up.

As previously mentioned, Pamela Voorhees is often overshadowed by her more-popular son, Jason Voorhees, who has since become the mascot for Friday the 13th, but that’s because she doesn’t make it beyond the first film. As we recall, Pamela Voorhees is the original killer in Friday the 13th, whose murderous rampage originates from a scorned mother’s rage following the accidental death of her son at the hands of neglectful counselors. Returning to Camp Crystal Lake, the scene of the crime years prior, Pamela enacts her revenge by slaughtering any and all camp counselors in sight. Pamela believed that she could actually hear the thoughts of her unborn child instructing her towards committing acts of violence, so we can safely assume that her grief drove her crazy. Eventually, she’s beheaded by Alice Vardy, the sole survivor of the initial massacre, but she’ll forever be remembered for kick-starting the franchise.

This might be a surprising entry, but what with Orphan: First Kill currently showing in theaters, it had to be done. As the nine-year-old Esther she poses as, Leena Klammer isn’t the least bit intimidating, but when she sheds her facade and shows her true colors as a mentally ill murderer, it’s clear why Estonia was in shambles upon her escape. In the climactic act of Orphan (2009), we discover nine-year-old Esther to be 33-year-old Leena Klammer, a Saarne Institute escapee who was diagnosed with hypopituitarism at birth, a disorder that stunted her growth and caused proportional dwarfism, allowing her to pose as a young girl. We learn more about Leena in Orphan: First Kill, but her most terrifying moment comes at the end of Orphan, when Isabelle Fuhrman removes her makeup and prosthetics and pursues Vera Farmiga’s Kate Coleman across a frozen lake. Leena / Esther is made more horrifying by how unhinged she is and how there seems to be little rhyme or reason for her killing sprees.

This one’s a little tricky. It isn’t exactly Regan that we would consider the “villain” of The Exorcist (1973) but rather the demon that possesses her. Still, if we’re assessing the fundamentals of what makes someone or something “scary” — Regan ticks all those boxes. After playing with an Ouija board (isn’t it always an Ouija board?), Regan starts to exhibit strange behavior, which two local priests determine to be a demonic entity using Regan as its host. Even for a ’70s horror, The Exorcist has remained memorable and iconic through Regan, its so-called villain. Although there’s credit owed to Linda Blair’s portrayal of Regan, we’d argue that it’s actually Mercedes McCambridge, who voices the demon Pazuzu, that’s the unsung hero of The Exorcist. McCambridge breathed life into Pazuzu four decades ago, only adding to Blair’s impeccable acting. Together, the duo make a frightening and historically unforgettable horror villain.

There isn’t a single fan of The Blair Witch Project out there that hasn’t seen its sequel, Blair Witch (2016), which was set in the same universe. The film revolves around the brother of Heather Donahue, the vanished filmmaker who went missing along with her two friends in 1994, who decides to travel to the woods near Burkittsville, Maryland, in search of Heather, whom he still believes is alive. Along with his friends, James Donahue encounters a sinister force inside the Black Hills Forest, which is confirmed to be the illusive and mythical Blair Witch, presumably the ghost of Elly Kedward, a woman who was banished from the town for witchcraft in 1785. Right at the end of Blair Witch, James and his close friend Lisa encounter the Blair Witch, whom the audience only sees for a split second. In a blink-and-you-miss-it moment, the Blair Witch reveals herself as a deformed humanoid creature with elongated arms and legs. It’s truly the stuff of nightmares. Although we don’t see her for long, the Blair Witch still strikes fear into the hearts of those unfortunate enough to catch a glimpse.

This might be a controversial pick, especially following the Blair Witch, but Jordan Peele’s Us offered up plenty to dissect. Around halfway through the film, we meet Adelaide Thomas, also known as Red, is the Tethered counterpart of Adelaide Wilson, both played by Lupita Nyong’o. Red is one of the only Tethered who can talk, rather than just making incoherent noises, but her voice is raspy from when the ‘real’ Red had strangled her (and possibly damaged her windpipe) in the opening sequence of the film. After being banished to live below the surface, Red became the de facto leader of the Tethered, guiding them towards salvation. She might not look like much, but Red is the textbook definition of unsettling; she communicates through eerie mannerisms and strained speech, giving her otherworldly traits, but she looks and sounds like a human being, and as a society, haven’t we established that humans are the real villains in this world? They look like us, they act like us, but they aren’t us — and they’re coming for us. That thought alone is enough to give you plenty of sleepless nights.

Technically, it’s undecided whether Annabelle (or rather, the demon who resides in it) is male or female, since a spirit isn’t tangible or material and therefore cannot have a determined gender. For the sake of argument, we’re talking about Annabelle the doll, which is designed to look like a girl and is therefore female. In the Annabelle franchise, we hear remarks such as “Annabelle did it,” which gives us some leeway as far as Annabelle being the vessel for a demon, but still committing acts of violence or malice. If the fact that the Annabelle doll exists in the real world doesn’t freak you out, then there might not be much that will. Based on the real-life possession of the Annabelle doll as documented and experienced by Ed and Lorraine Warren, Annabelle is still supposedly cursed. Dolls are unsettling enough by themselves, so add demonic possession to the mix and you’ve got yourself a horrifying villain — à la Chucky. Annabelle leaves us quaking in our boots, and most of the time, all she ever does is move inconspicuously from one room to another.

Perhaps the most iconic female horror villain ever, Samara Morgan is a vengeful ghost resembling a Japanese onryō. She hides her waterlogged and deformed face with a thick mass of black matted hair. Samara popularized the “string-haired ghost girl” horror trope in Western cinema and inspired like-minded horror films like The Grudge (2004). Conceived in rape, Samara was born to Evelyn, a woman institutionalized after suffering psychosis, and later adopted by the Morgans. Samara begin exhibiting strange supernatural powers. Her adoptive mother Anna snaps and tries to kill Samara after her powers spiral out of control. She throws Samara down a well and it takes seven days submerged in water before Samara dies and reincarnates as a vengeful spirit, hence the continuity with the seven-day deadline for the cursed footage to kill the viewer. Not only does Samara’s physical appearance cause severe unease, but the way she crawls just gives us the heebie-jeebies.

Mama isn’t necessarily a cult classic like some of the other horror films of the last few decades, but it’s certainly a sleeper hit that deserves more recognition than it received. Interestingly, Edith Brennan’s demonic form is actually portrayed by a male, Javier Botet, who is often cast in creature roles due to his Marfan syndrome diagnosis, which causes hyperlaxity in body tissue, resulting in abnormally long fingers with a tall and thin build. Mama (2013) revolves around a scarred woman whose newborn baby was taken from her after she was incarcerated in an asylum. When Edith dies, she isn’t reunited with her baby, who has unfortunately died separately, leading her vengeful ghost to roam in search of a replacement. Initially, we only see Mama a few times in snippets, but towards the third act, she makes herself known, terrorizing the family of two young girls whom she has grown to care for. Mama’s elongated face and overall disfigurement makes her visibly nightmare-inducing.