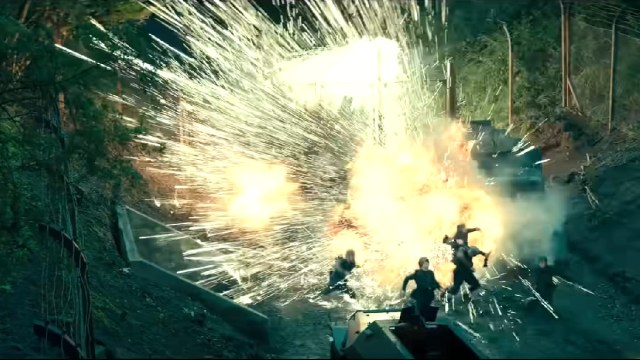 As far as genre mashups go, they don’t come more batsh*t insane and brilliantly bonkers than the deliriously demented 2018 cult favorite Overlord, which decided to throw science fiction, action, creature features, and war epics into the mix to create a delicious stew of insanity.

Director Julius Avery balances the tone perfectly, which isn’t an easy task when any one element of the World War II thriller could easily have overpowered the other in the wrong hands. The plot is remarkably simple, with a group of American soldiers finding themselves trapped behind enemy lines right on the cusp of D-Day, before they uncover a secretive research facility that’s harboring dark, dangerous, and grotesque secrets – but the beauty is in the maniacal execution.

Despite strong reviews from critics and positive notices from audiences, though, Overlord was a huge box office bomb after earning less than $42 million on a $38 million budget. It’s been a strong performer on-demand ever since, to be fair, with the appreciation society back out in force on Reddit to celebrate the unhinged joys of the unbridled imagination on show.

Even the opening set piece, which has absolutely nothing to do with blood, guts, and gore as the main cast of characters take to the skies en route to their planned destination, is a phenomenal example of parachuting viewers right into the maelstrom of noise, pyrotechnics, and bullet-riddled shenanigans to come.

It’s a real shame Overlord ended up in the red, then, but a long-lasting second life is a more than suitable compromise in the long run.