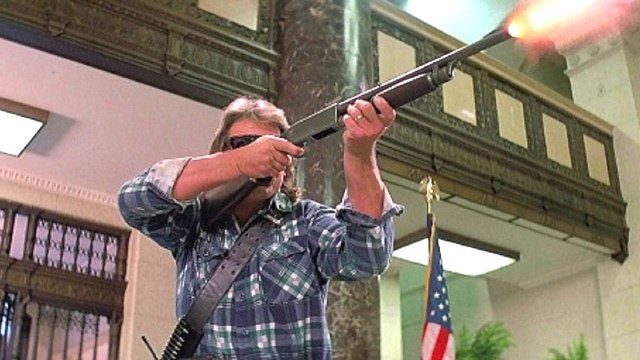 The long and illustrious career of John Carpenter has gifted the world with several stone-cold classics, more than a couple of underrated gems, a cult classic or two, and the inevitable critical and commercial disasters. Few filmmakers have seen their back catalogues cannibalized quite so readily, leaving us increasingly thankful that They Live has been left well alone.

Halloween Ends releases tomorrow to deliver the 13th installment in the slasher series, while an Escape from New York remake has been lodged in development hell for what feels like forever, and that’s without mentioning that Assault on Precinct 13, The Thing, and The Fog have all been rehashed, with Big Trouble in Little China and Starman also threatening to follow suit.

Despite releasing 34 years ago, satirical sci-fi They Live might be even more prescient today than it ever was. Roddy Piper’s drifter finds a pair of sunglasses that give him the ability to see the world for how it really is, which leads him to discover that the media and government have been utilizing subliminal messaging to keep the population subdued and under the thumb so that the wealthy and elite can continue their under-the-radar takeover of humanity.

The acclaimed street-level adventure has continued to prove itself as a legendary cult favorite, then, with iTunes subscribers the latest to revisit the charms of the Carpenter great. Per FlixPatrol, They Live has rocketed right onto the platform’s most-watched rankings, even cementing itself on the Top 10 in the United Kingdom and Ireland.

Obviously, the rich and powerful are aliens in this case, but we’ll be damned if it the subtext doesn’t still ring true. It also helps that They Live is an absolute joy from start to finish packed with wit, humor, excellent performances, splattery effects, and memorable action – with streaming subscribers more than happy to chew bubblegum and kick ass after all this time.