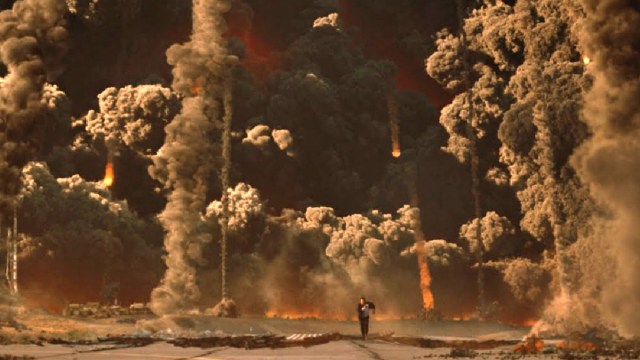 Thankfully, nobody goes into a blockbuster disaster epic looking for well-rounded characters and scientific accuracy, especially one directed by Roland Emmerich. Based on a mammoth box office haul of $791 million, it would be an understatement to say cinema’s pre-eminent Master of Disaster encouraged audiences to leave their brains firmly at the door when 2012 landed.

Not that it matters, but the story finds governments around the world surreptitiously forging ahead with plans for the survival of the human race in the event of an impending cataclysmic series of devastating incidents poised to wipe everyone and everything from the face of the planet. It’s biblical, but it’s also inspired by ancient prophecies, and we can’t forget about those mutating neutrinos, either.

Big, loud, incredibly stupid, at least 30 minutes too long and probably nowhere near as entertaining on repeat viewings as it is the first time around, Emmerich’s 158-minute butt-number is many things to many people, but a classic it certainly ain’t. It’s plenty of fun under the right circumstances, though, which would go some way to explaining its latest resurgence on the streaming ranks.

Per FlixPatrol, 2012 has fallen from the skies to obliterate the Top 10 most-watched list in both the United Kingdom and United States on Starz, while it’s also been making a serious splash on Rakuten. Given the unfortunate (but deserved) fate that befell Moonfall, there’s a chance we could never see Emmerich hit these sort of heights again, with his 2009 opus upping the ante to insanely overblown levels.