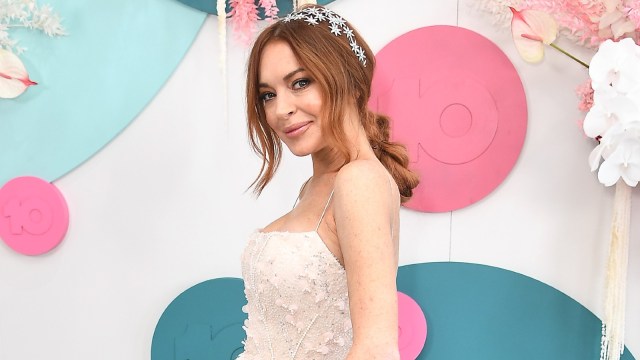 Call up any ardent lover of romantic comedies and ask them to list their favorites in the genre. It’s almost impossible that 2006’s mushy yet rather heartfelt The Holiday won’t be one of their top choices. But while it showed the world the romancing prowess of Kate Winslet, Jack Black, Cameron Diaz, and Jude Law, it also gave us a glimpse of the possibility of Lindsay Lohan one day starring in an action flick.

Wondering why we decided to dig up an almost two-decades-old rom-com to spark a debate around Lohan’s would-be capabilities in an action film?

Well, the actress recently sat down for an in-depth interview with Forbes and upon being asked about what she wants her future projects to look like, Lohan was quick to share her aspirations of doing an action film, a Marvel film to be precise.

“I think I’m always the kind of person that I see what comes and take it as it comes, wherever the scripts lead me. I love doing ‘rom coms’ so that’s always something that I’m going to look for and do a ton of when the time is right, but there’s definitely other — I’ve never done an action film. I would love to do something with Marvel — just seeing what comes my way and I’m open to different roles.”

Given the convoluted love stories of The Holiday’s four leads, it would have been hard to remember the smaller details from the film. So, here is a brief refresher — Lohan appears as an actress in the trailer of a fictional movie Deception within the rom-com as Diaz plays the role of Amanda Woods, a movie trailer producer. She and James Franco make their uncredited appearances as two characters on the run from dangerous foes in the faux trailer.

The merely seconds-long trailer show Lohan as Rebecca Green, an unsuspecting waitress who gets tangled in a deadly maze of secrets when her father, whom she never met, leaves her something in his will, inadvertently making her the target of his enemies. Franco is her knight in shining armor as he shows up right when she is attacked, taking it upon himself to save her.

While the overall vibe of the “trailer” is rife with fear and danger, the majority of it sees Lohan’s character playing the damsel in distress, relying on Franco to protect her. Though she does put a knife in an ankle holster for a hot second, it doesn’t really do much to alter the overall aura of her character.

Though the initial days of MCU were filled with female characters who were only introduced either to be objectified or to be the superhero’s rescue mission, the expansive cinematic universe has since come a long way with the debut of the likes of Shuri, Captain Marvel, Kamala Khan, etc along with a massive transformation in how characters like Pepper and Black Widow are depicted.

Knowing Marvel Studios and seeing the current path it is on making the MCU more inclusive and progressive, it would be prudent that the Mean Girls star takes up other, less demanding action roles and buff up her resume, before setting her sights on the glorious golden ticket.