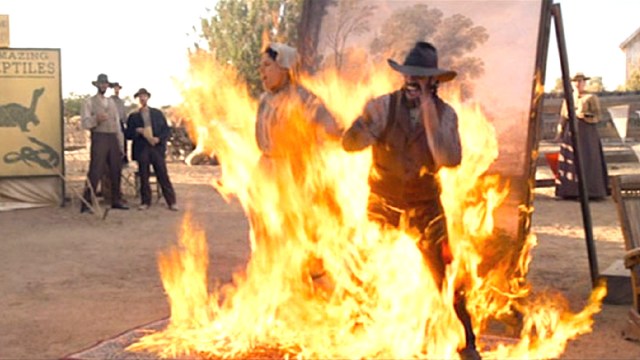 Having already built a small screen empire, Seth MacFarlane’s journey to feature-length domination got off to an impressive start with Ted, which ended up becoming both one of the highest-grossing R-rated features and studio comedies ever made after hauling in a mighty $549 million at the box office. Unfortunately, things didn’t go quite as well for A Million Ways to Die in the West.

While it wasn’t exactly a bomb by virtue of recouping its $40 million budget twice over from theaters, respective Rotten Tomatoes scores of 33 and 41 percent from critics and audiences were miles behind Ted, even though the writer, director, and leading man had significantly upped the star power.

That being said, a Western comedy running for close to two hours when it barely had enough in the tank to sustain 90 minutes was a mistake, and MacFarlane severely grates in the lead role, without even mentioning the flat and uninspired direction. Perhaps to compensate, though, A Million Ways to Die in the West with stacked top-to-bottom with talent, most of whom are way above such a scattershot and scatological escapade.

MacFarlane still has his fans, to be fair, and they’ve been willing to give his maudlin misfire another shot on streaming. As per FlixPatrol, A Million Ways to Die in the West has resurfaced on the HBO Max Top 10 in the United States, and here we were thinking it had been forgotten.

Charlize Theron, Liam Neeson, Amanda Seyfried, Neil Patrick Harris, Sarah Silverman, Ryan Reynolds, Bill Maher, Patrick Stewart, and Kaley Cuoco all feature in one way or another, while Jamie Foxx and Christopher Lloyd even reprise their roles as the title hero from Django Unchained and Back to the Future‘s Doc Brown. In the end, even all those names couldn’t salvage an underwhelming end product.