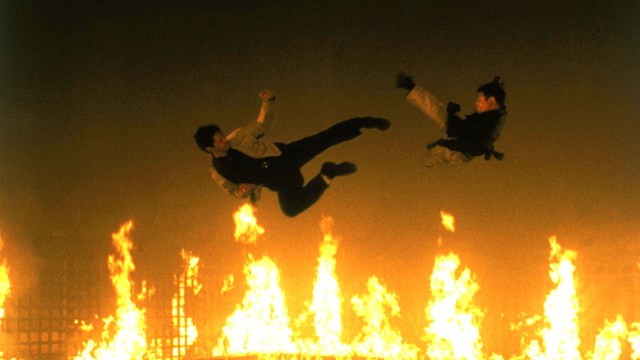 When you think of movies based on the works of William Shakespeare, a martial arts actioner produced by Die Hard and Lethal Weapon‘s Joel Silver that starred Jet Li in the lead role probably wouldn’t come to mind. The turn of the millennium was a strange time for the genre, though, leading to the unlikely existence of Romeo Must Die.

As you’d imagine given the talent involved, which also extends to include Highlander: Endgame writer Eric Bernt, first-time director and Speed director of photography Andrzej Bartkowiak, along with cast members Aaliyah, DMX, Delroy Lindo, and DB Woodside, Romeo Must Die is far from a lavish or even remotely faithful interpretation of the bard’s work.

Instead, Li’s former police officer escapes from prison after being incarcerated for a crime he didn’t commit, before heading off to America in an effort to avenge his brother’s death. Once there, he falls in with Aaliyah’s Trish, but it turns out her father is a lot more connected to the cross-continental revenge mission than he’d like anyone to know, setting both sides up for a collision course that promises death and destruction.

Romeo Must Die was a decent-sized hit at the box office after crossing $90 million on a $25 million budget, even if reviews were lukewarm. It clearly has its fans, even if we’d bet our lives on Kenneth Branagh not being one of them. Either way, those with a soft spot for Shakespeare minus the iambic pentameter have been revisiting the gung-ho flick in their droves on streaming.

As per FlixPatrol, Romeo Must Die has been surging on the Google Play Movies global charts, 22 years after proving that Shakespeare’s back catalogue is so malleable it can serve as the basis for fistfights, shootouts, chases, and explosions.